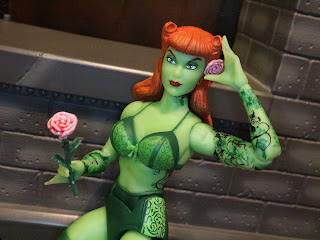 I'm on a roll looking at the DC Comics Bombshells action figures from the Ant Lucia inspired DC Designer Series! Last week was Wonder Woman, yesterday was Harley Quinn, and today is Poison Ivy! I'm a huge Ivy and I'm loving this take on her. In some ways she's the plainest of the Bombshells as she's just wearing some fancy 1940's styled lingerie. Of course, she's also still Poison Ivy, so the bright red hair, green skin, and intricate vine designs help to add some more excitement. Poison Ivy was the third character released in the DC Comics Bombshells statue line (October 2013). This action figure is incredibly faithful to her statue and art origins, so let's jump in and see how well she translated, shall we? More pin-up Poison Ivy goodness after the break... 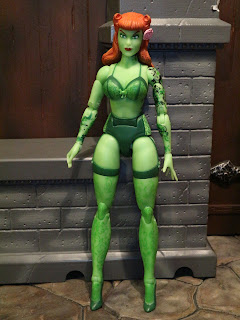 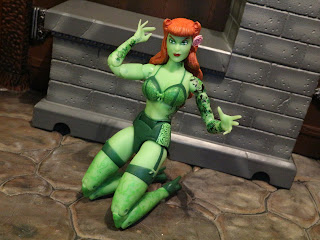 * The Bombshells have some fantastic articulation in this line. It seems as good, and possibly even better, than DC Icons. At 6 3/4ths inches Poison Ivy is in scale with most of your other superhero figures (unlike Icons) and she moves as good, if not better than them. She's solid, durable, and has a pretty great range of motion. I love how she can actually kneel in some very classic pin-up poses. She is just so insanely fun to play with and to photograph. 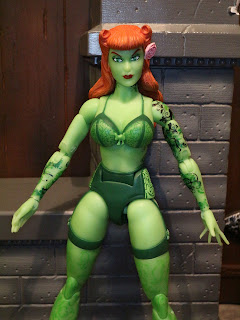 * As I mentioned above, Ivy has a pretty simple design as she's really just wearing some very classic lingerie. Still, it's very accurate to Ant Lucia's art and seems faithful to both the era and Poison Ivy's own design sensibilities. Considering she often just wears flowering vines, this makes a lot of sense for the character. 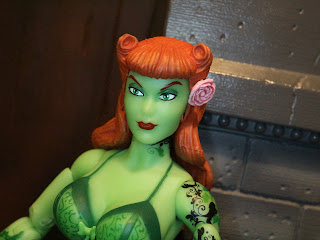 * Her headsculpt is gorgeous, too. I'm glad beautiful headsculpts seem to be a pretty consistent part of this line and Ivy is as stunning as you'd hope. Her eyes are very bright and fetching while her hair has a very cool style to it. Plus, she's got a flower tucked in there, too. 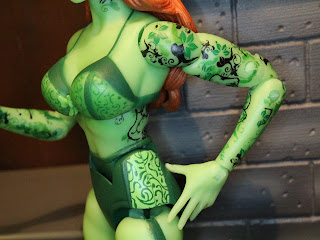 * At first Poison Ivy might seem a bit plain but, when you look closely, you'll notice there are some really fine details here. Ivy's arms have a series of intricate tattoos designed to look like various creeping vines. These also run down her back and sides. The bra and panties also have some vine-like designs painted onto the designs. This is fantastic work with very clean lines even in this smaller scale. 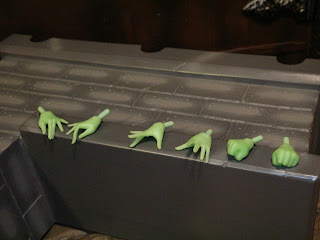 * Like the other ladies in the line I've looked at so far, Poison Ivy includes 6 interchangeable hands. These swap out very easily, feel very durable, and give you some nice options for posing the figure. Ivy includes two standard fists, two three fingered grip hands sculpted to hold the included rose in a convincing way, and two posing hands with the fingers splayed. These work great for pin-up styled posing or for using her plant power.s 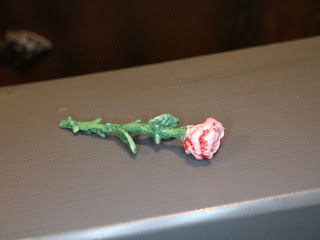 * To add something interesting to her poses, Ivy comes with a separate rose that she can hold. It's a nice piece and my guess is that you don't have anything quite like it in your collection. DC Collectibles has really picked out some unique accessories for this line, haven't they? 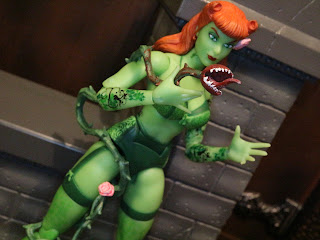 * Ivy's second true accessory is a creeping vine with a rose bloom growing off of it and a nasty little plant with some sharp teeth and a wondering tongue. This is fairly pliable and you can wrap it around her when she's posing. Vines like this surround her on the Bombshells statue so it's fun to see one here. This could be a great accessory for any Poison Ivy figure if you didn't feel like using it on this one. 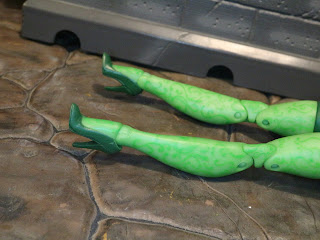 * My only negative with this figure is that her high heeled shoes make it incredibly difficult to stand her up. The stiletto heels don't seem to be quite long enough to adequately let the figure maintain her balance. Fortunately, considering the statue this design comes from us kneeling, this may not end up being a problem for you if you're replicating that pose when displaying Ivy on your shelf. 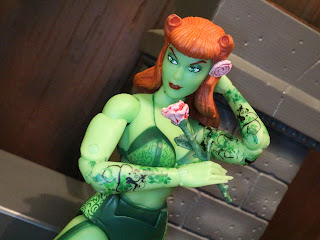 Ivy's another excellent release in this line. She's not as good as Harley or Wonder Woman but, considering how good both of those figures are, that's not necessarily a terrible thing. The paintwork and sculpting on Ivy is just gorgeous and the accessories really add a lot of options to the way you display her. She's a very unique figure to add to your collection and a fun take on Ivy. Absolutely a Great release in this line! 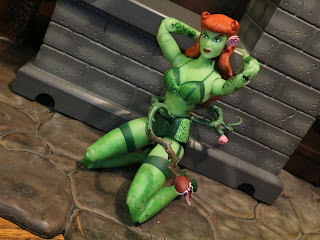