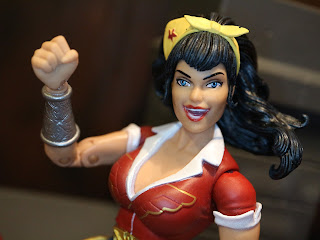 As some of you may (or may not know) I went a few weeks without a camera capable of doing solid macro photography. Well, that has changed and I'm now back and better than ever. Well, in my mind, anyways. Yesterday's review of the Mezco One:12 Collective Flash was the first to use my new Canon EOS M10 with a specialized macro lens but today's starts a set of reviews I'm extremely excited to look at and photograph: The DC Bombshells action figures! Technically this series is titled DC Designer Series: Ant Lucia and it's part of the long running series that has featured action figures rendered in the styles of a number of great DC artists. It's no understatement to say that Ant Lucia's DC Bombshells have been one of the most successful DC properties we've ever seen. Starting as only a line of beautiful statues (still ongoing, FYI), Bombshells has evolved into it's own entity with an ongoing comic, merchandise, clothing, costume patterns, Funko POP! vinyls, and now action figures. First up I'm looking at Wonder Woman. Not only is she #1 in this series but she was the subject of the first statue released under the Bombshells banner in September 2013 and she's the first lady of DC Comics. Let's take a closer look at the Bombshells Wonder Woman after the break... 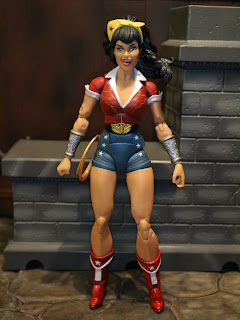 Accessories: Six interchangeable hands, a pipe wrench, and a two piece chain with a cinder block and iron ball. 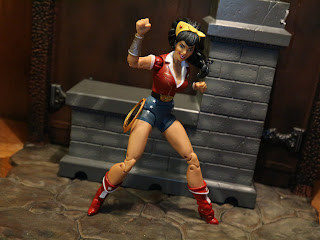 * First off, I am amazed by how much articulation this line has. It seems as good, and possibly even better, than DC Icons. At 7 inches Wonder Woman is in scale with all of your other superhero figures (unlike Icons) and she moves as good, if not better than them. She's solid, durable, and has a pretty great range of motion. I'm really pretty enamored with her. 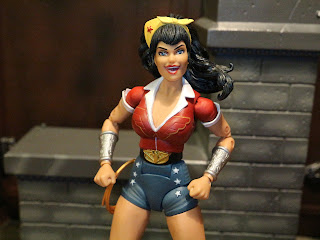 * The costume design on this figure is incredible and while part of that credit goes to Ant Lucia for masterfully combining Wonder Woman's outfit with the look of Rosie the Riveter, the rest of the credit goes to Paul Harding for an excellent sculpt with lots of detail. I love the detail on the "WW" symbol on the shirt and the big collar! I'm also digging the paintwork here as it's very clean and vibrant. 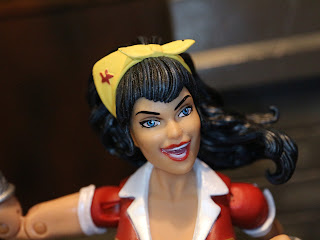 * Early on, looking at promotional pictures, there was some concern that Wonder Woman was going to look a bit terrifying and over expressive. That, thankfully, did not turn out to be a problem; she's gorgeous! I love the expressive smile on her face! This is a very joyous look that's just so much fun. We don't see many figures with an expressions like this. The bandanna and long hair also look excellent. I love the light blue drybrushing on the hair; it's almost undetectable at a glance but it looks great and brings out a lot of detail. 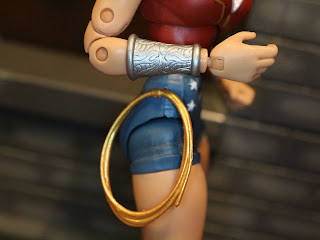 * There are lots of clever nods to Wonder Woman's classic costume such as the yellow bandanna in place of her tiara and her red shirt with blue star spangled shorts, but she does have some more overt details such as her coiled Lasso of Truth (not removable) and the Bracelets of Submission. The small, etched details on the bracelets are really nice. 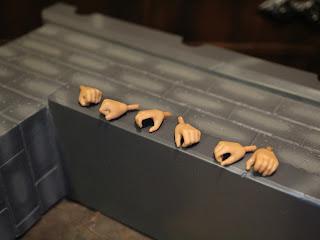 * Wonder Woman comes with 6 easily interchangeable hands: A pair of fists, a pair of open grips, and a pair of more closed gripping hands. They feel really durable and I have no concern about breakage when changing these out. 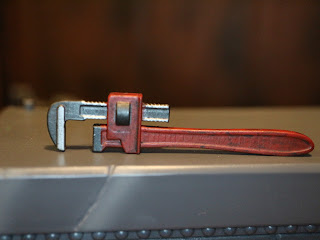 * Wonder Woman did lose an accessory that is shown in the sales images for the figure (a shield) but she retained the coolest stuff. First up is a pipe wrench. Pipe wrenches just look cool and this one has an insanely nice sculpt and paintjob. Seriously, if you didn't know that was for an action figure and couldn't tell the scale, wouldn't you just assume it was a regular ol' pipe wrench? This is a cool accessories that ties in to the Rosie the Riveter imagery Wonder Woman is paying homage to. 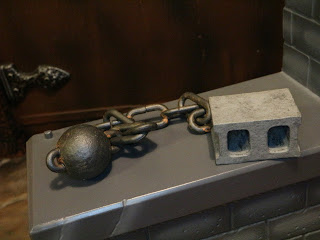 * The second accessory is an chain that's carrying two heavy objects: An iron ball and a cinder block. Again, incredible paintwork (you can even see some rust on the iron ball and chain) and sculpting here. What's the purpose of this accessory though? 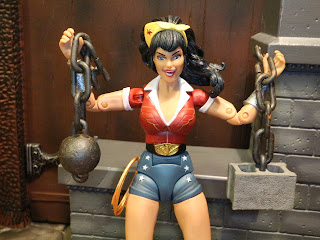 * It gives Wonder Woman something to tear apart with her bare hands! The actual Bombshells artwork and statue has Wonder Woman ripping apart some chains, so DC Collectibles made them a bit more interesting. The chain connects in the middle and can easily break apart to show off Diana's strength. 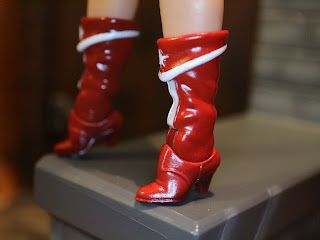 
* Wonder Woman's boots look cool, but what is with the feet? Don't the seem just a bit two small? I mean, it seems like something is off here, doesn't it? I think it has to do with the placement of the swivel/hinge ankles but it just looks off to me. 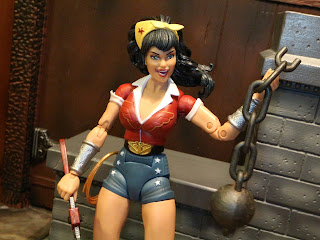 I'm so impressed with this figure and I really hope that DC Collectibles manages to keep this line going. This is not just a fun novelty figure: It's a darn good action figure of Wonder Woman all on it's own. Incredible sculpt and paintwork, solid articulation, and a pair of really fun accessories makes this a real highlight of 2017's DC Collectibles offerings thus far. Whether you're a fan of the Bombshells, the 1940s era pinups, or just Wonder Woman in general, this is one of the coolest figures you'll find. She's a Great and a 1/2 figure! 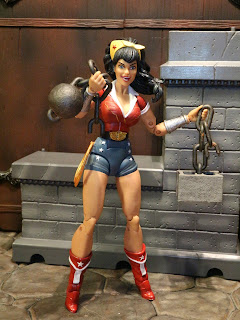