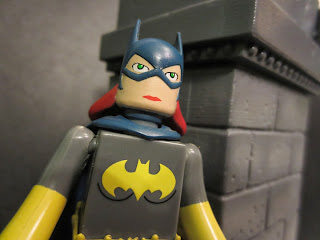 This is going to be a brief review at it's covering something that's enither new nor terribly complex. It's a Kubrick Batgirl. Kubricks are block styled minifigures (similar to Minimates or Lego minifigures) released by Japanese company MediCom that actually preceded Minimates (the first Kubrick series was released in 2000). And yes, they are called Kubricks in honor of Stanley Kubrick. Anyways, at some point (probably around 2003) Kubricks released a blind boxed series of figures featuring various Batman heroes. Alongside the Batgirl figure I'm looking at today, the set also included Batman, Robin, Mr. Freeze, Azrael, Scarecrow, and Spoiler (which as far as I know is the only articulated Spoiler figure ever released by a toy company). Ready for a brief look at Batgirl? This is actually the first Kubrick figure I own, which is kind of interesting in and of itself. More details after the break.... 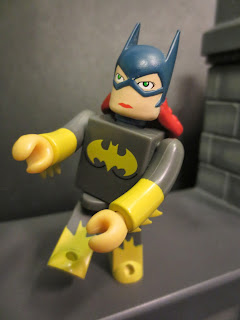 Batgirl is about 2 3/4 inches tall, including her bat ears. The style is very blocks and chunky with a rectangular torso and thighs but a rounded head and arms. While many details are simply painted on, there's more sculpting here than on your standard Minimate. She features the following points of articulation: ball jointed hips, a swivel waist, ball jointed shoulders, swivel wrists, and a swivel neck. On Batgirl, the swivel neck and swivel waist are hindered by the long hair flowing out of her cowl and her belt, which is an extra sculpted piece. Otherwise, She has a fairly average range of movement for such a small figure- more than a Lego mini or Playmobil klicky but less than a Minimate. Most of the figure disassembles easily so if you wanted to mix and match parts with other Kubricks, I assume you could. 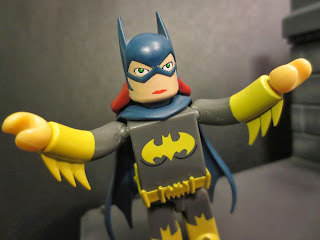 While the charm of some stylized brick figures is that they reuse standardized pieces and unique paint schemes to create characters, this Kubrick Batgirl has some sculpted pieces that add detail to the figure. Her head features the pointy bat ears and flowing, curly hair that help to make up her distinctive profile along with raised her cowl as a relief against her head. Her arms also feature the trademark Batsuit gauntlet spikes. The rest of the outfit it accomplished either with paint applications or extra pieces such as her cape and belt. The paint apps, including yellow details, look pretty good and everything is fairly neat and clean except for one spot on her left boot. I'm not wild about the mouth though; it looks kind of lifeless. While she has peg holes on her feet, she also has some weird holes on the tops of her feet. What are those for? I've seen them on some other Kubrick figure, too.

Batgirl doesn't have any traditional accessories but when disassembling her you can remove her cape and belt. The cape looks great and has a nice design that flares out on the sides while sweeping forward. I actually wish more of the larger Batman/ Batgirl figures had capes sculpted like this; there is a tendency to sculpt capes flowing backwards which causes figures to fall backwards. The belt has the tubes of the older styled utility belt and a raised bat emblem on the front. It easily fits over her waist piece. 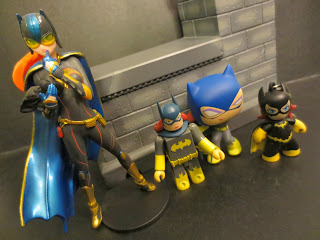 I like this figure, but I'm not overwhelmed by it. Maybe it's the lifeless expression? That's got to be it. Otherwise, it's a very solid little minifigure. I'm going to go with a Good rating here. If I weren't a Batgirl collector, I probably wouldn't be too interested, but there's nothing negative here and the figure is solid, durable, and fairly well articulated. I think Kubrick made a Batgirl figure based off of her look in Batman: The Animated Series, so I'll be trying to track that one down now along with the Minimate Batgirl from the brief period of time when DC Minimates were being released. Keep checking back this week as I'm going to be reviewing something Batgirl related everyday! Some older stuff and some stuff fresh and new!
Posted by Barbecue17 at 12/02/2014