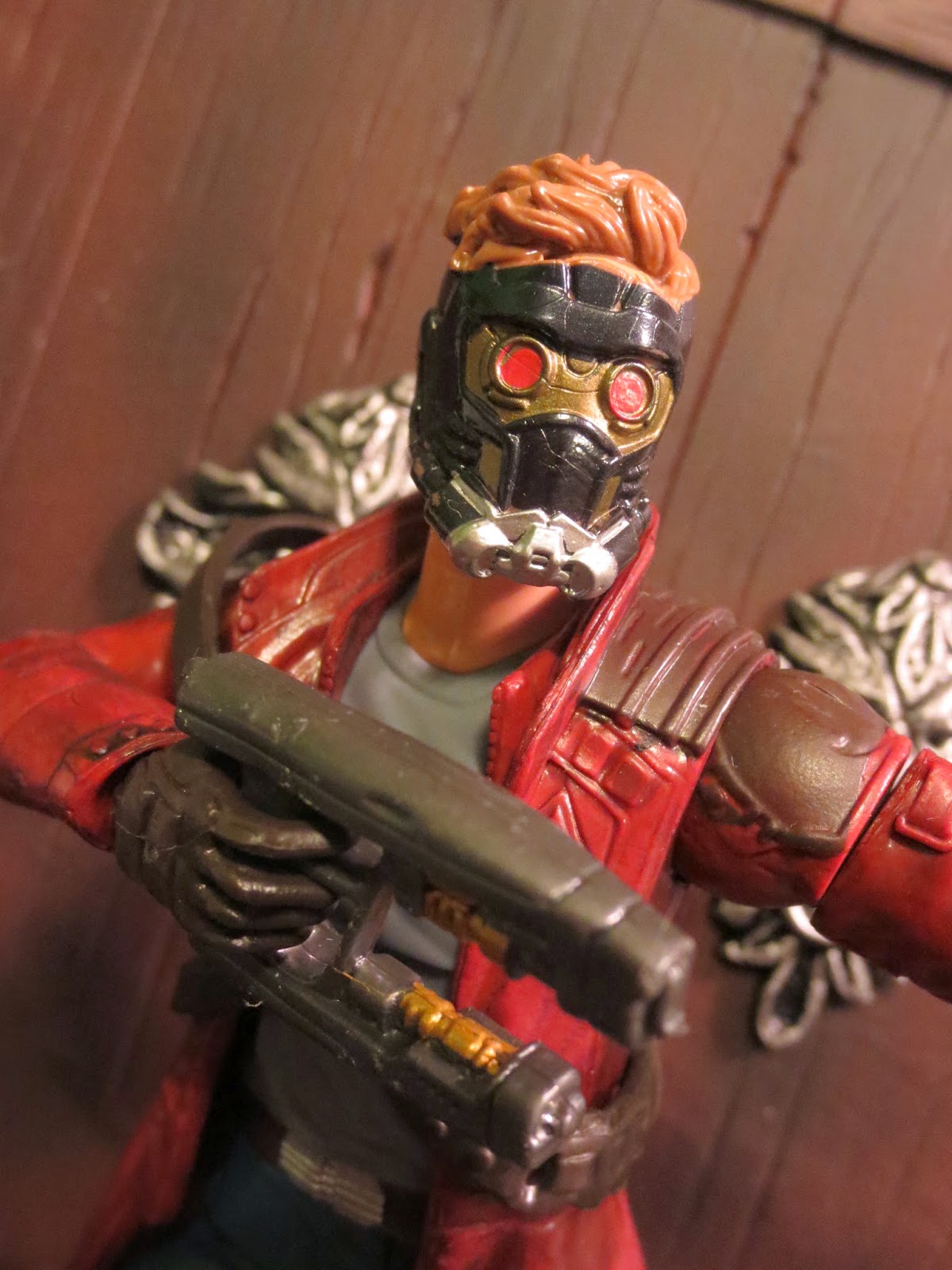 Yes, despite a few of my fellow Epic Reviewers not showing much interest in Guardians of the Galaxy, I am personally more excited for this film than any film in recent memory. I have to say the last film that I was this excited about was probably The Dark Knight Rises back in 2012, and it would seem that I'm not alone. According to this recent article by the The Hollywood Reporter, the Adobe Digital Index is boasting that Guardians of the Galaxy will be one of the summer's top blockbusters. Regardless of how the film itself does, right now we're here today to look at this new action figure of Star-Lord/ Peter Quill from Hasbro's Marvel Legends Infinite Series Guardians of the Galaxy wave of figures. Played by Chris Pratt in the upcoming film Star-Lord is a small time outlaw with a penchant for 70's and 80's pop music who becomes the leader of the Guardians of the Galaxy. Ready for a closer look at a figure from Marvel Studios' newest franchise? Then join me after the break... 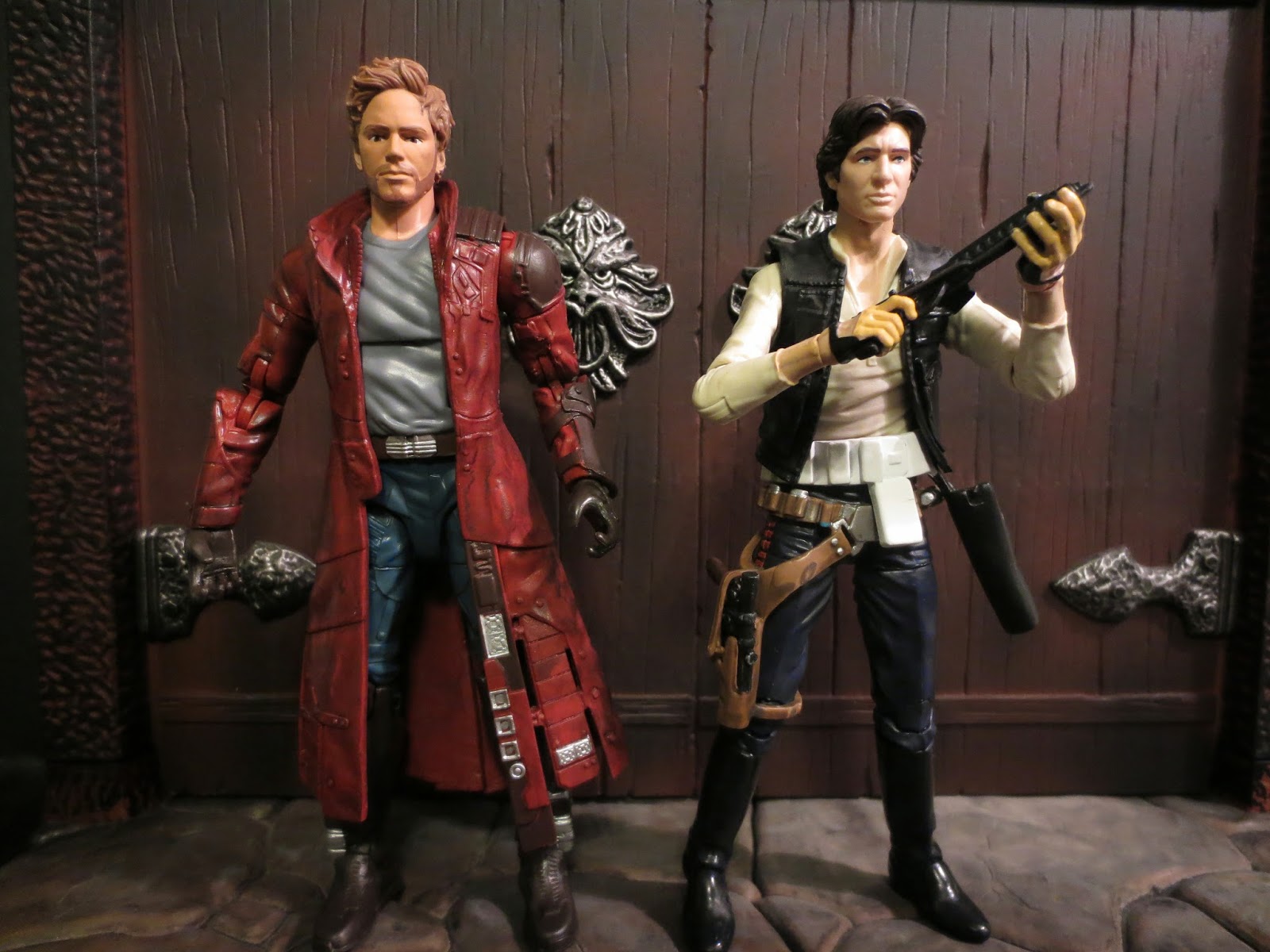 While I rarely talk about packaging, I have to say that Hasbro has really produced some very attractive looking boxes for the Marvel Legends Infinite Series. While most of the figures have been a pain in the rear end to track down, they do look darn fine which might explain why they so easily fly off of the shelves. The series mixes comic inspired characters such as Iron Man in his space suit and Nova with the film cast of Rocket Raccoon, Gamora, Drax the Destroyer, and Star Lord, although the styles of the figures don't seem to clash too much. Scale wise these absolutely fit in with previous Marvel Legends figures: Star-Lord stands around 6 1/4 inches tall and has a look that does replicate his film appearance, but isn't so overly realistic that he can't stand in with the rest of your Marvel Legends. Like most Marvel Legends, this series has a build-a-figure to encourage you to track down everyone. This time it's Groot, Rocket Raccoon's personal muscle and house plant who is voiced by Vin Diesel. 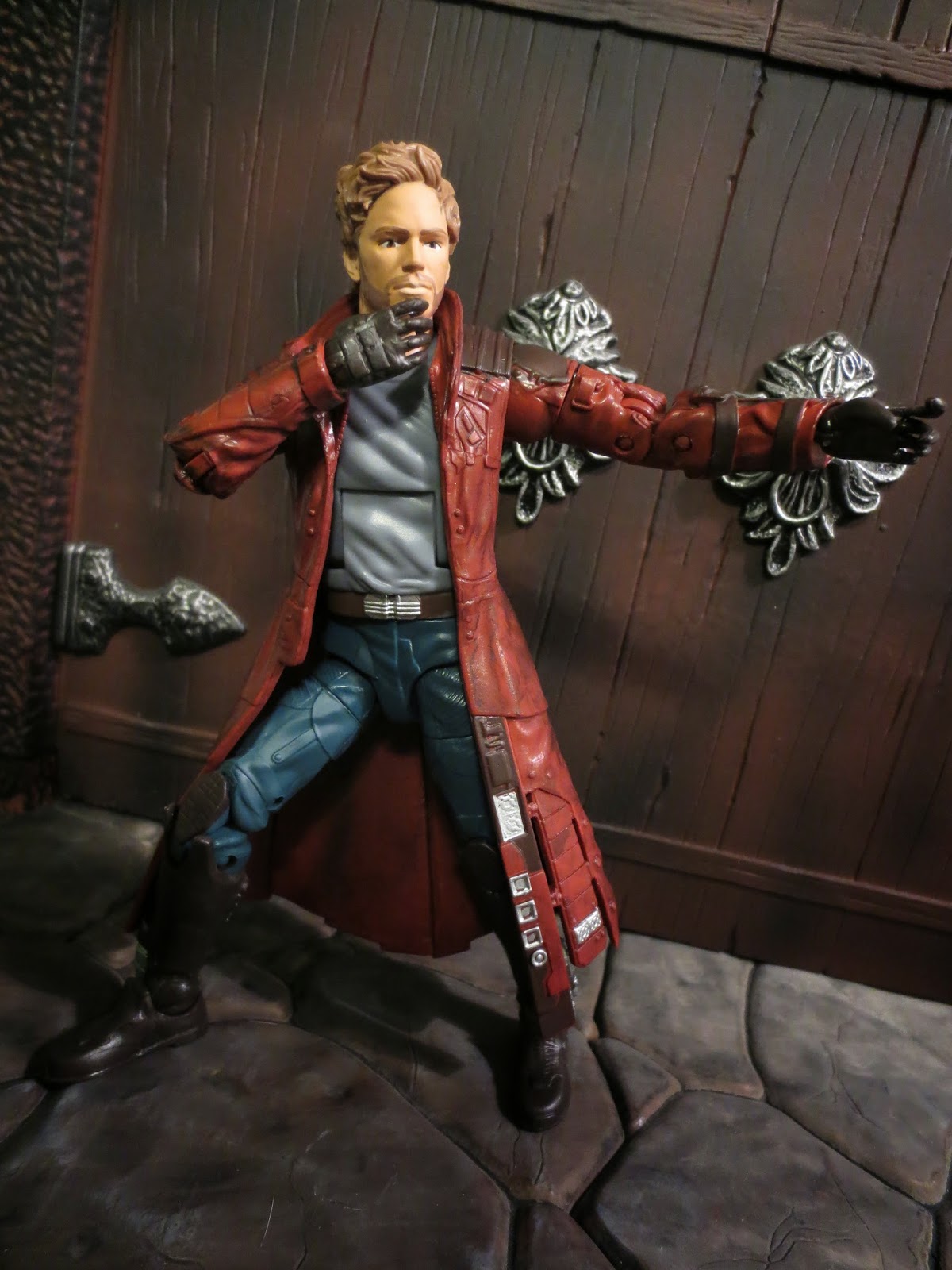 Peter Quill/ Star-Lord has some pretty good articulation overall, although he does have a few little irritating elements that seem to be par for the course with Hasbro's Marvel Legends. He features the following joints: swivel/ hinge ankles, double hinged knees, swivel thighs, ball jointed hips, a swivel waist, a hinged abdomen, swivel/hinge shoulders, swivel biceps, double hinged elbows, swivel/ hinge wrists, a hinged neck, and a ball jointed head. There's a good amount of articulation here and I like most of it: The legs, wrists, ankles, and head are all really well done and allow for some great movement. It's those darn arms again, however, that are giving me problems! For some reason, Hasbro has been giving their Marvel Legends figures very ugly and very gummy double hinged elbows. Not only do they look awful, but the plastic feels so soft that it tempts me to want to chew on it because I imagine it'll taste like bubble gum. I know there is always the risk of making a joint like this too brittle so that it snaps, but I think Hasbro has went way to far and created arms that feel like a bendy toy (although I'm more afraid of the plastic tearing). Please, Hasbro! Stop doing this! 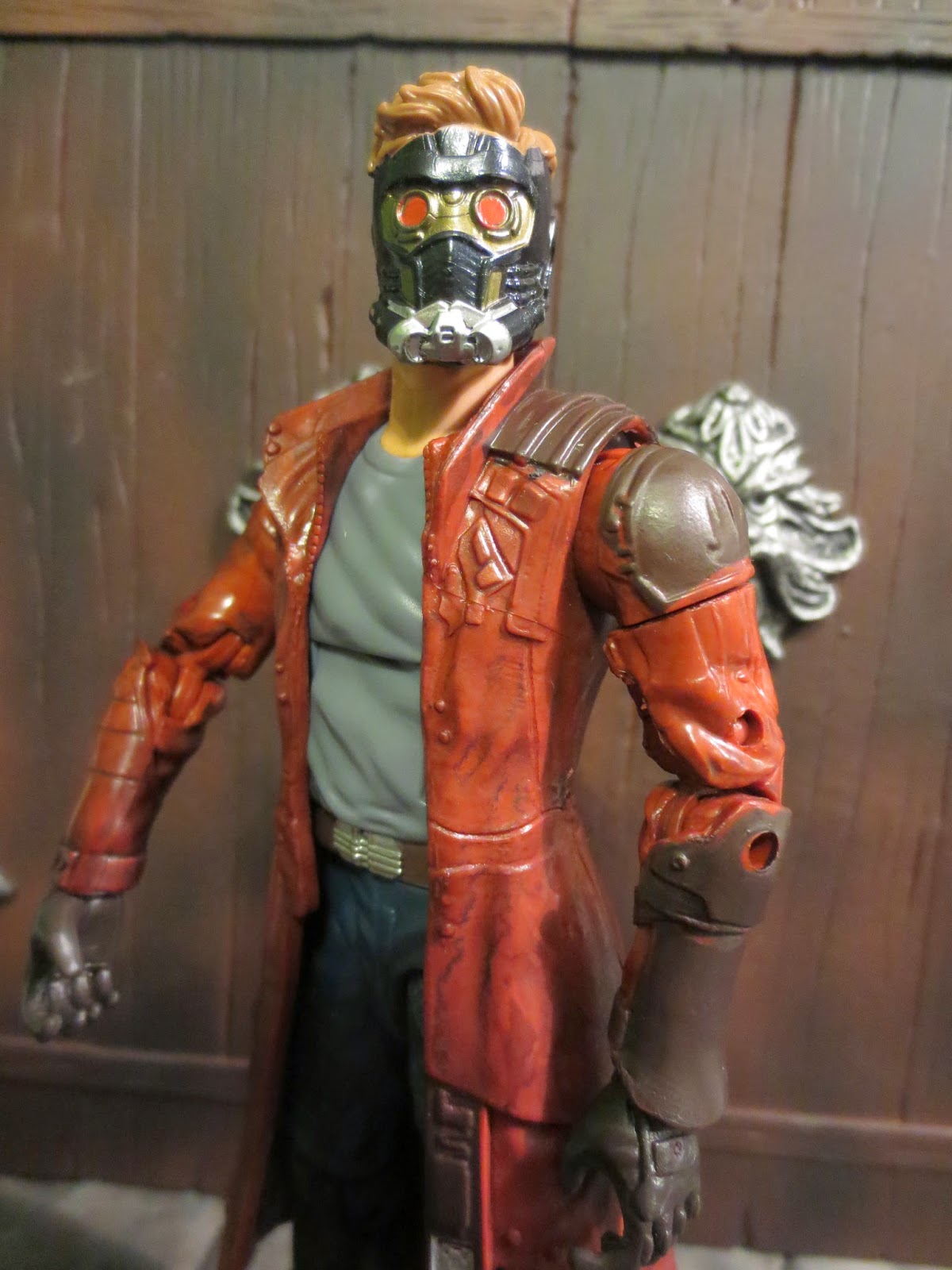 I can happily say, however, that everything bad is behind us. The rest of this figure is excellent, starting with the sculpt. Since Peter Quill doesn't wear a traditional superhero costume (and the Guardians are quite nontraditional) his sculpt is 100% new and looks to be incredibly screen accurate. Star-Lord appears to have at least two other coats in the film besides this red leather trench coat (a flight jacket and a short red leather jacket), but since this trench coat looks the most dynamic, it's a good choice for the toy. Check out all of the zippers, armored panels, and buttons on it; it's really detailed and looks very natural on the figure. It doesn't seem to be easily removable, so I wouldn't risk it. Peter's regular clothes underneath are well sculpted with plenty of wrinkles and a really interesting on his pants (they're some kind of space pants). The boots are great and even have the cool rocket boosters from the trailer on them. 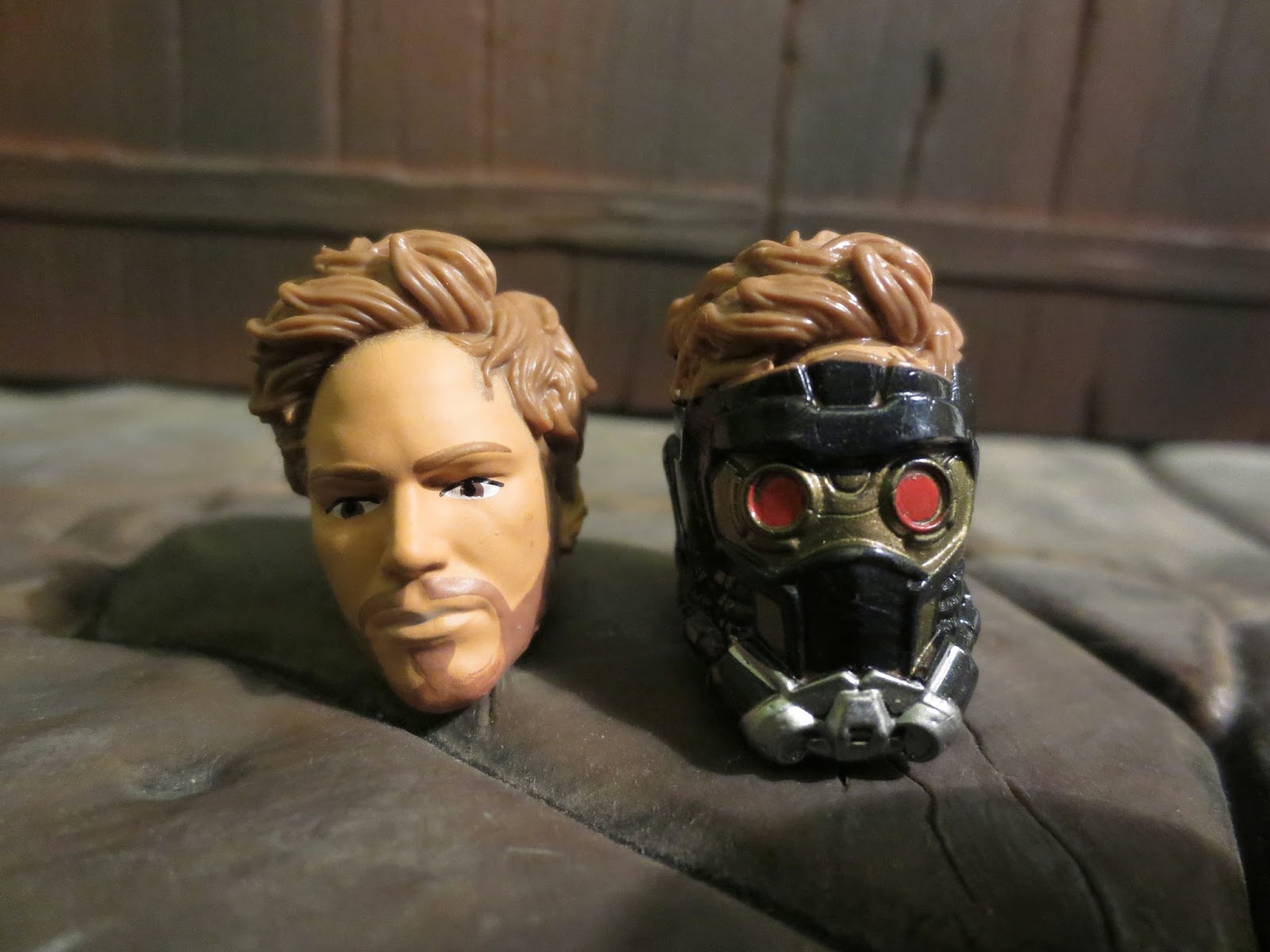 Star-Lord comes with two portraits: one of an unmasked Peter Quill and one wearing his space helmet/mask. They're very easy to swap and both look pretty good. I'm not going to say that the unmasked head looks exactly like Chris Pratt, but it doesn't not look like him either. It's a pretty average headsculpt but it works for the style of this line. I actually think his hair is some of the best looking hair on a 6 inch scaled figure. The masked head is quite cool and has a nice, shiny finish to it that makes all of the little details on it stick out. I like how the hair comes out the back and front of the mask, too. Great stuff! I'm always happy to get extra portraits with my figures! 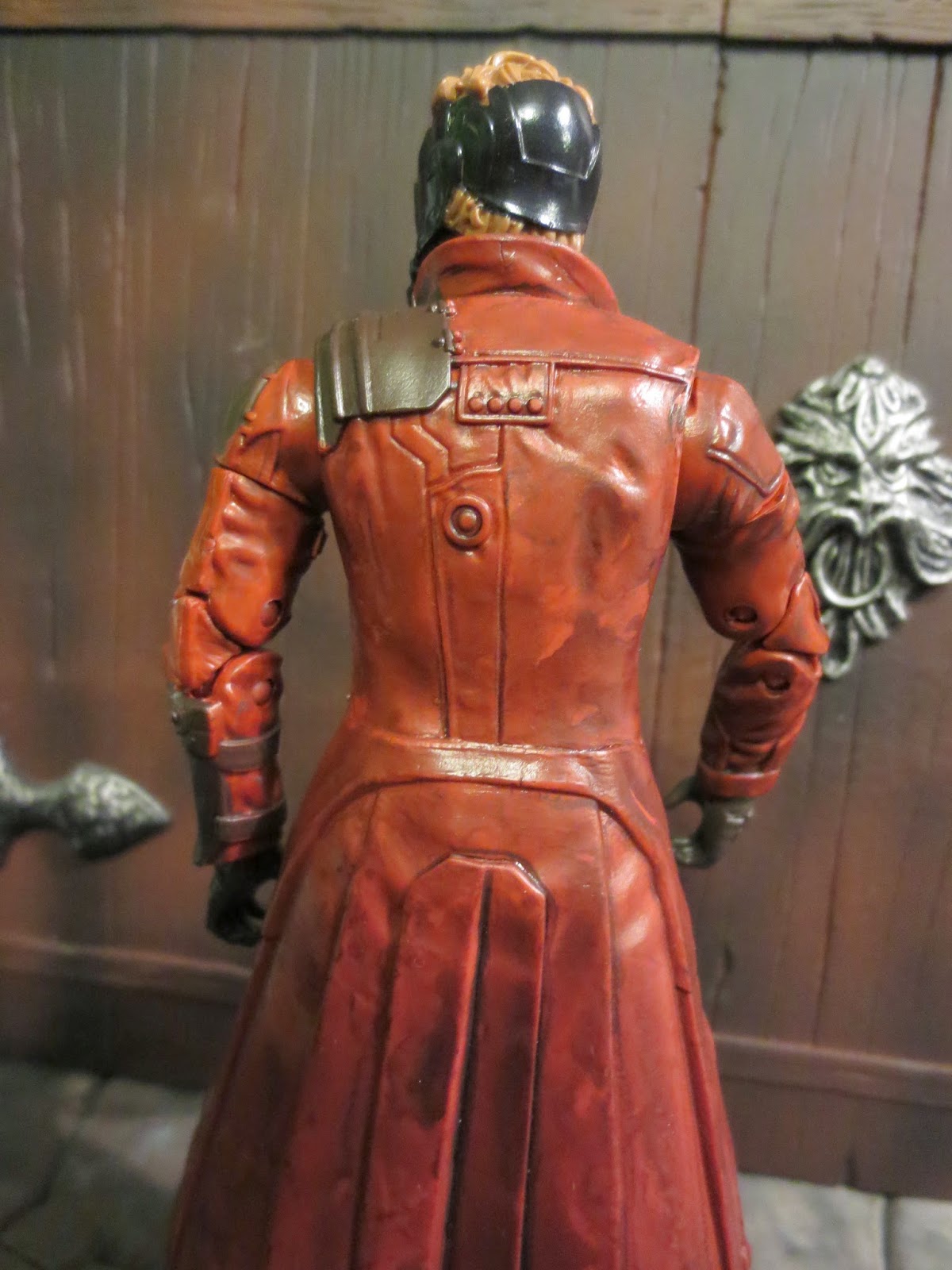 The paintwork on Star-Lord is really neat and clean. Hasbro usually does a good job with their paintwork on the bodies, but even both of the heads look excellent. Most of the figure seems to be molded in the appropriate colors of plastic although there are two places where good paintwork stands out: the boot thrusters and the coat. The boot thrusters could have been an easy detail for Hasbro to bypass, but they not only included them but also painted them. They're neat and clean and look awesome. The jacket's even better as it has a fantastic dark wash over it to give it a grimy, battle-worn, lived in look. It's a very nice job all around. 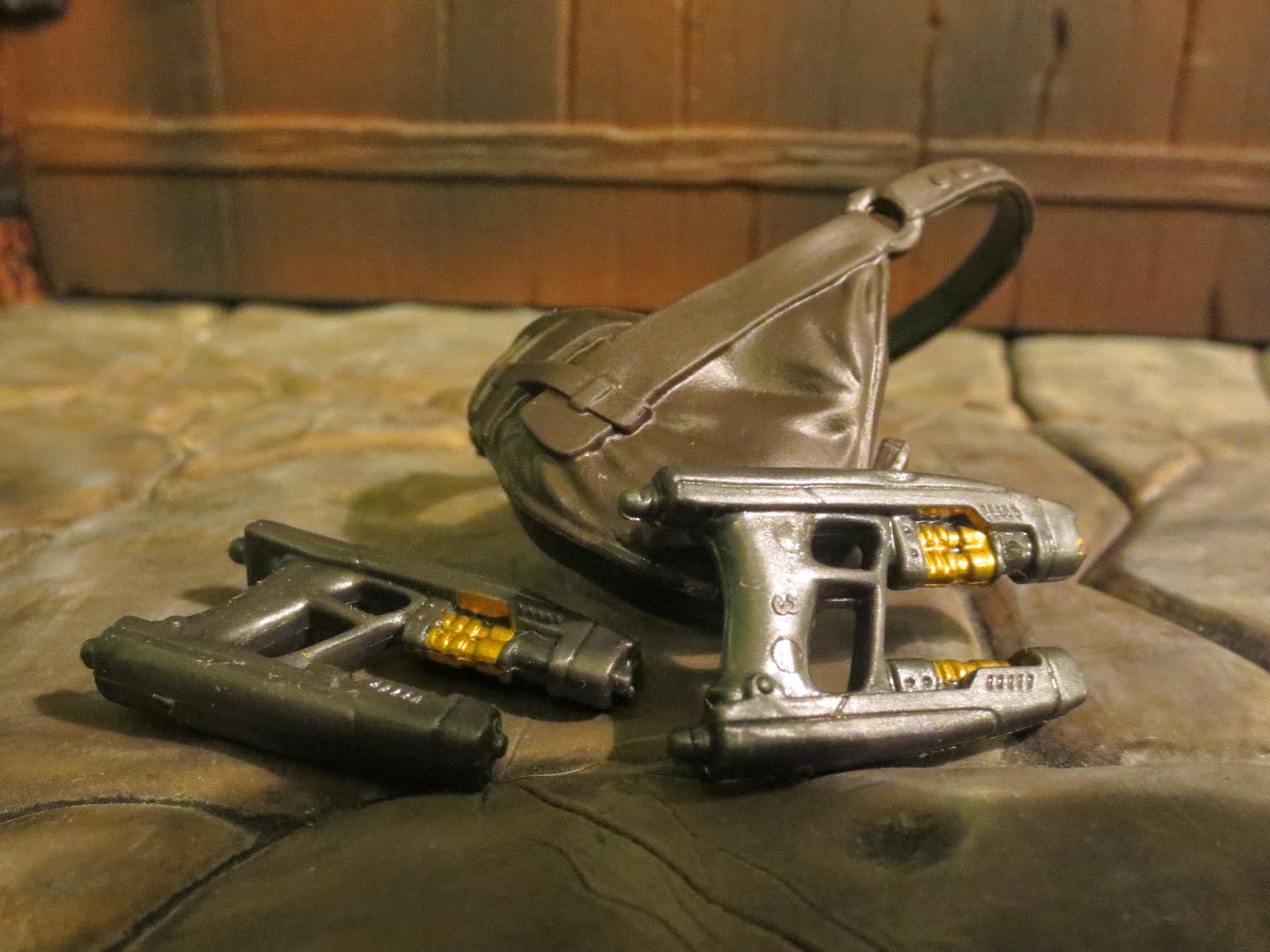 Holy hand grenades! Look at all of these accessories! Besides his additional portrait, Star-Lord comes with a removable backpack, his Sony TPS-L2 Walkman, headphones, two pistols, Groot's left arm, and that mysterious orb things that he's trying to steal in the film's trailer. Yeah, he is loaded. It's still easy to balk at the $20 price tag on the Marvel Legends Infinite Series, but a figure as loaded with stuff as Star-Lord definitely helps to soften the blow. The backpack doesn't have a lot of paint applications (really just some gold on the buckle) but it is a nice piece that can easily fit over Star-Lord's torso. 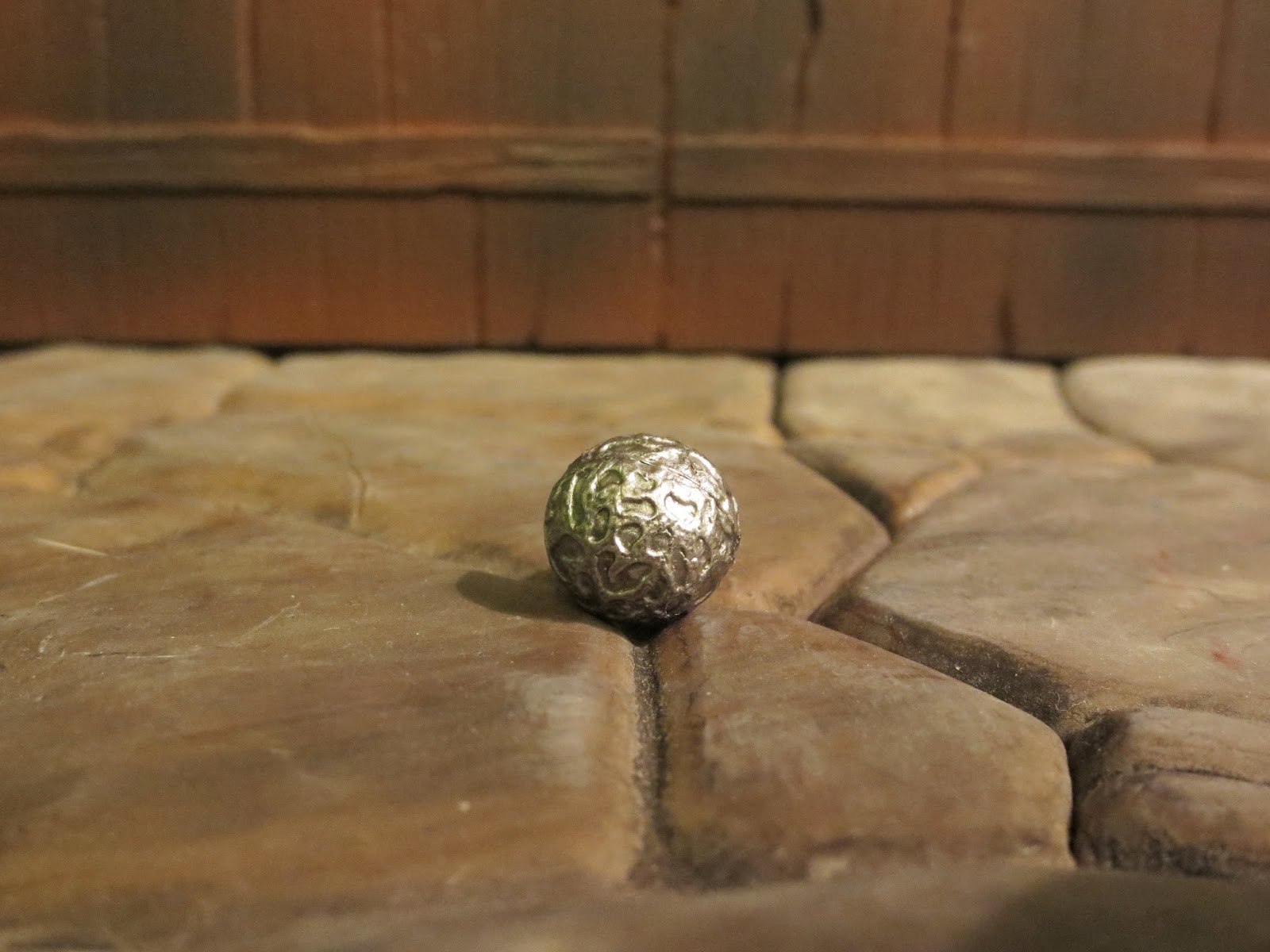 The mysterious orb is another cool item with some nice sculpting, but no paint apps. It is pretty much impossible to put it in Star-Lord's hands, though. 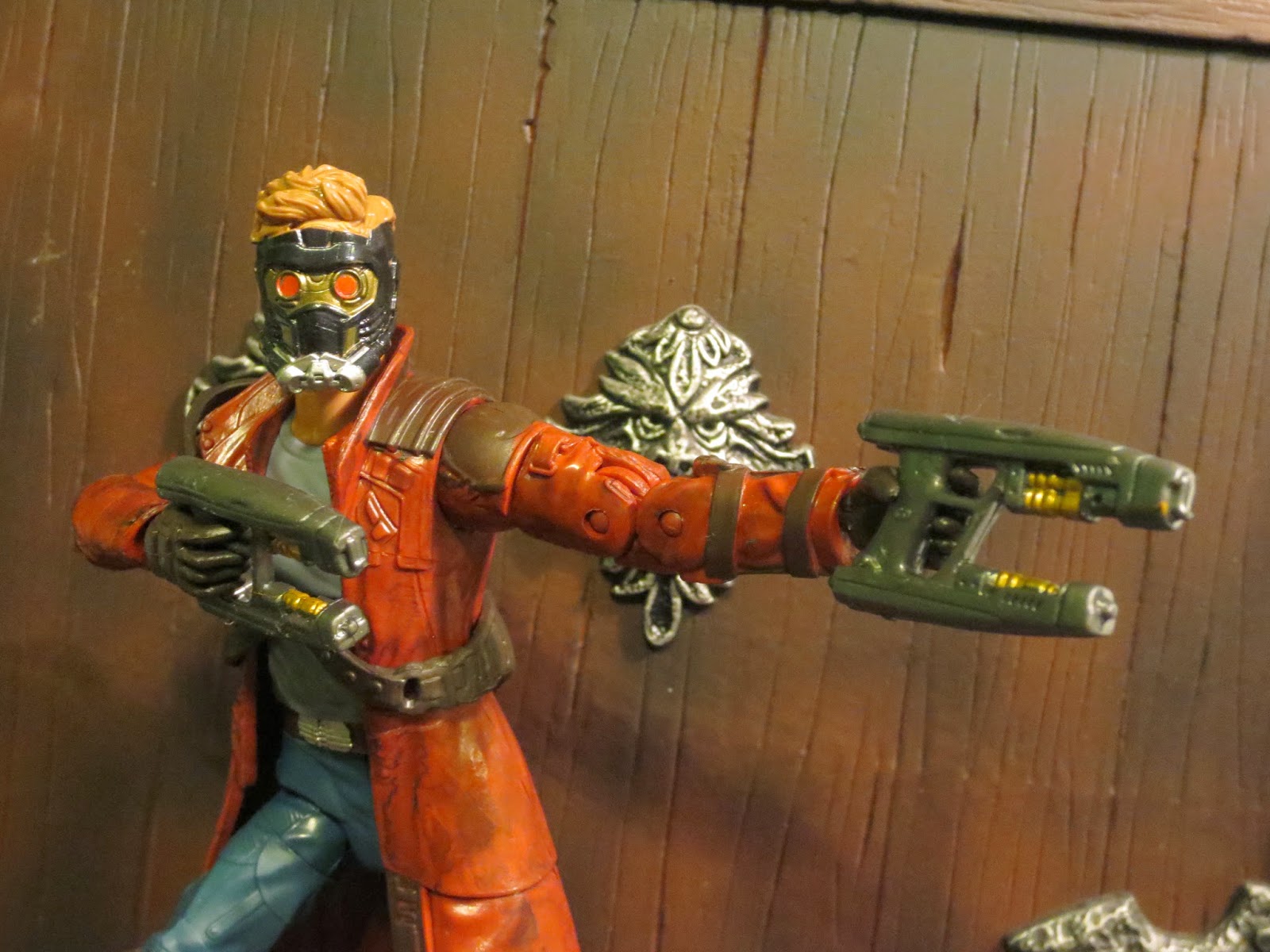 The two pistols don't have that problem, however. They look great and fit easily into Starlord's hands. They're molded in a nice gunmetal silver with gold highlights. 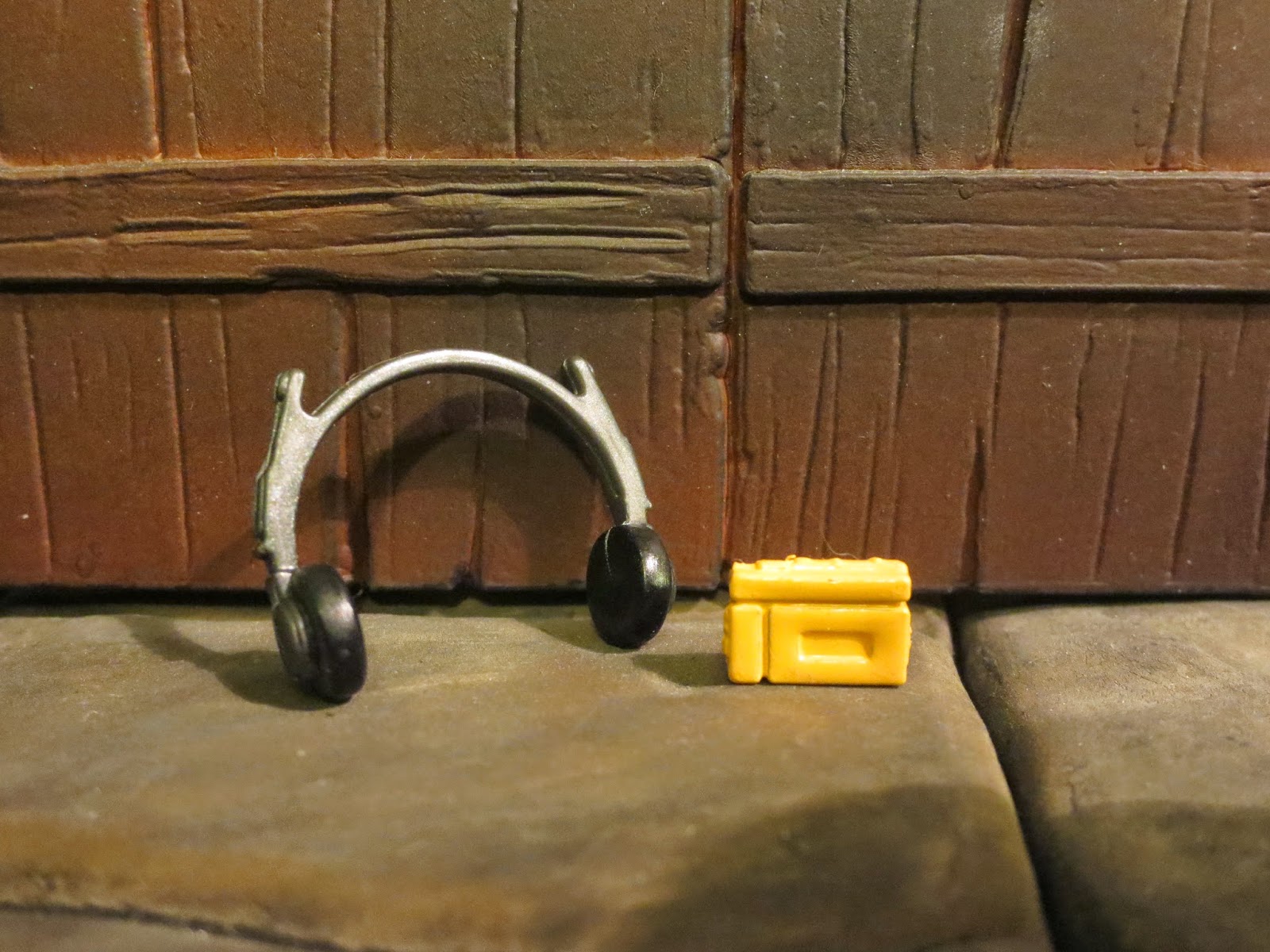 Of course, my favorite accessory is Star-Lord's Walkman and headphones. Yeah, there isn't a cord connecting these two together, but this is still a pretty cool little accessory. The Walkman is tiny (maybe even a bit too small) but the headphones fit the unmasked Chris Pratt headsculpt just fine. Now Star-Lord can groove to his "Awesome Mix Vol.1" on your toy shelf. 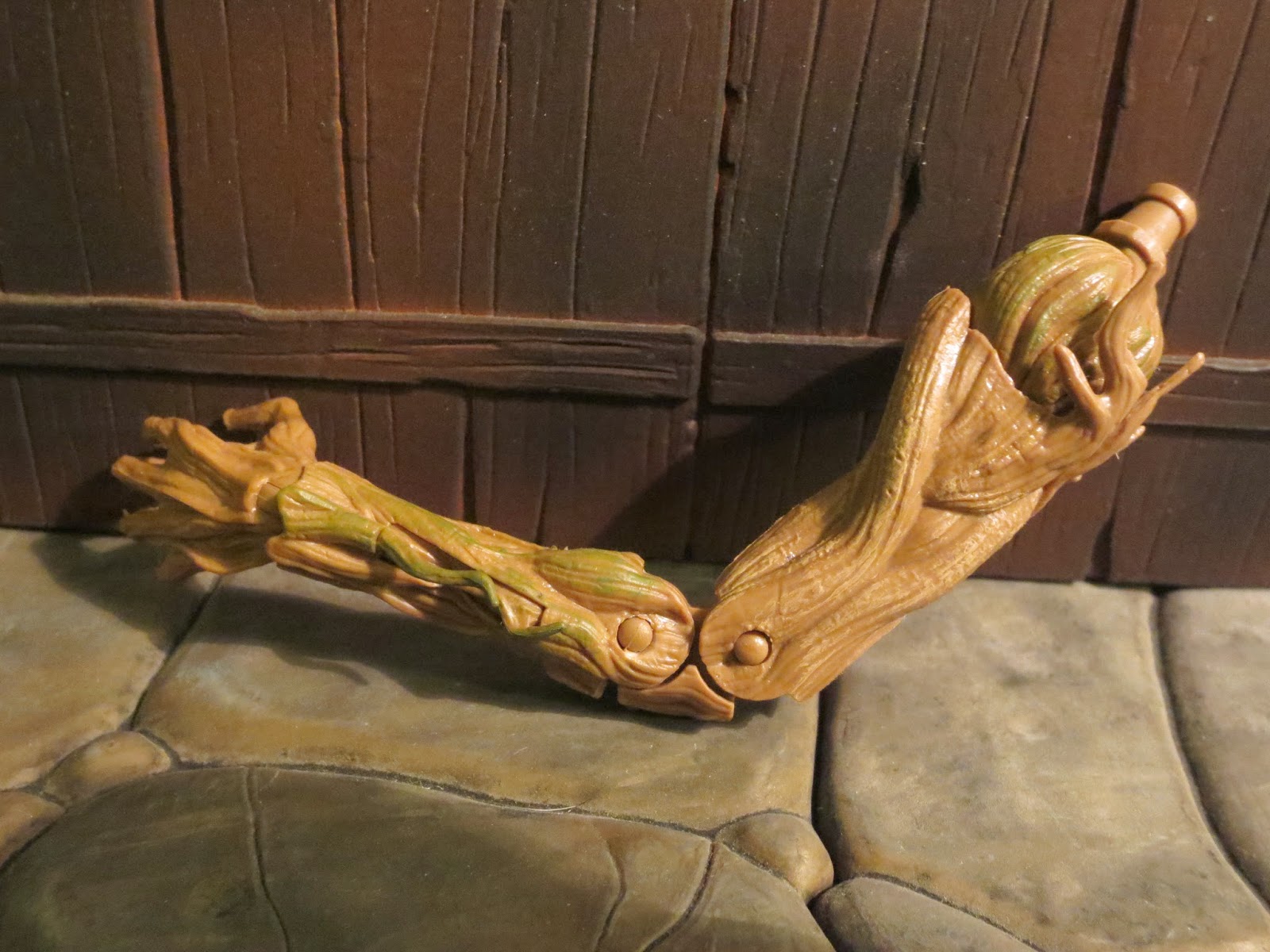 Last, but not least, is Groot's left arm. If I'm able to pick up the rest of the figures in this series, I'll say much more about it then. For right now, this is simply a tree-like left arm with a swivel/hinge wrist, a double hinged elbow, a swivel bicep, and a swivel/hinge shoulder. There were a great many figures from the Amazing Spider Man 2 and Captain America: The Winter Soldier waves that I never even saw at retail, but since the Guardians of the Galaxy series doesn't have any bizarre variants like those waves, things should hopefully be easier to find. I expect Rocket Raccoon to be a pain to find, though. Every figure in this six figure series comes with a Build-a-Figure part, so hopefully this helps cut down on peg warming for these guys (as there are still Spiderman and Captain America figures hanging around). 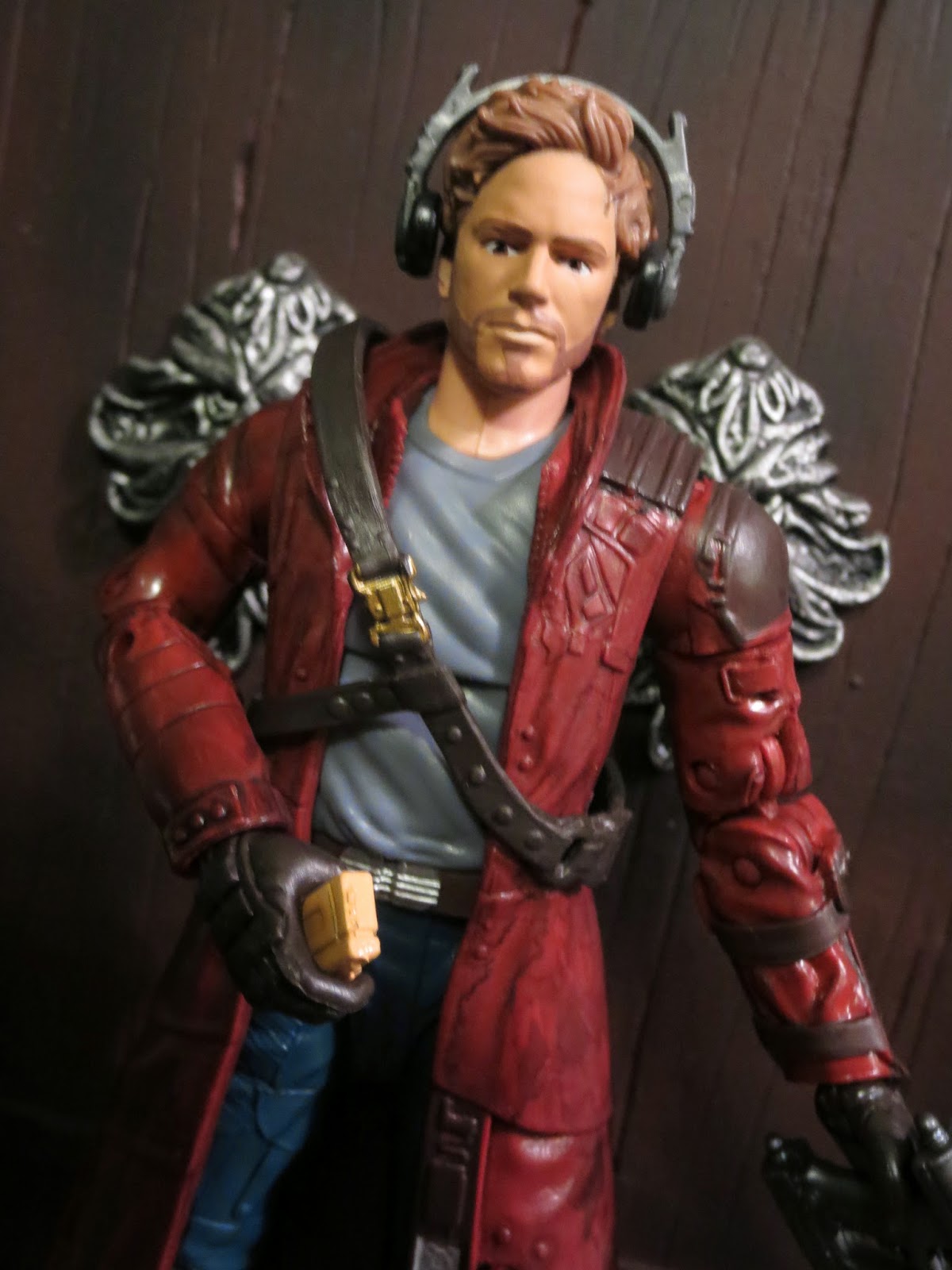 Other than my issues with the wonky double jointed elbows (a problem I have with most recent Marvel Legends figures), I think Star-Lord is an excellent action figure. The sculpting is really solid for a retail figure, the paint work is neat and clean with just enough dramatic flair on the coat to help him stand out, and the amount of accessories really give you plenty of different ways to display your Star-Lord. Honestly, those crazy arms are the only thing standing in the way of an Epic rating for Star-Lord; as he is, I'm giving him a Great and a 1/2. I really think I'm going to try and pick up the rest of the set so I'm hoping Hasbro doesn't experience the same problems it had with the Cap and Spiderman lines earlier this year. I wish they'd chosen to go with Nebula and maybe Ronan the Accuser over a comic styled Nova and another Iron Man, but hopefully if Guardians of the Galaxy does as well as some folks expect, we might see them. As it is, this is a fun figure for your superhero or sci-fi shelf, and he'll look even better surrounded by his partners. 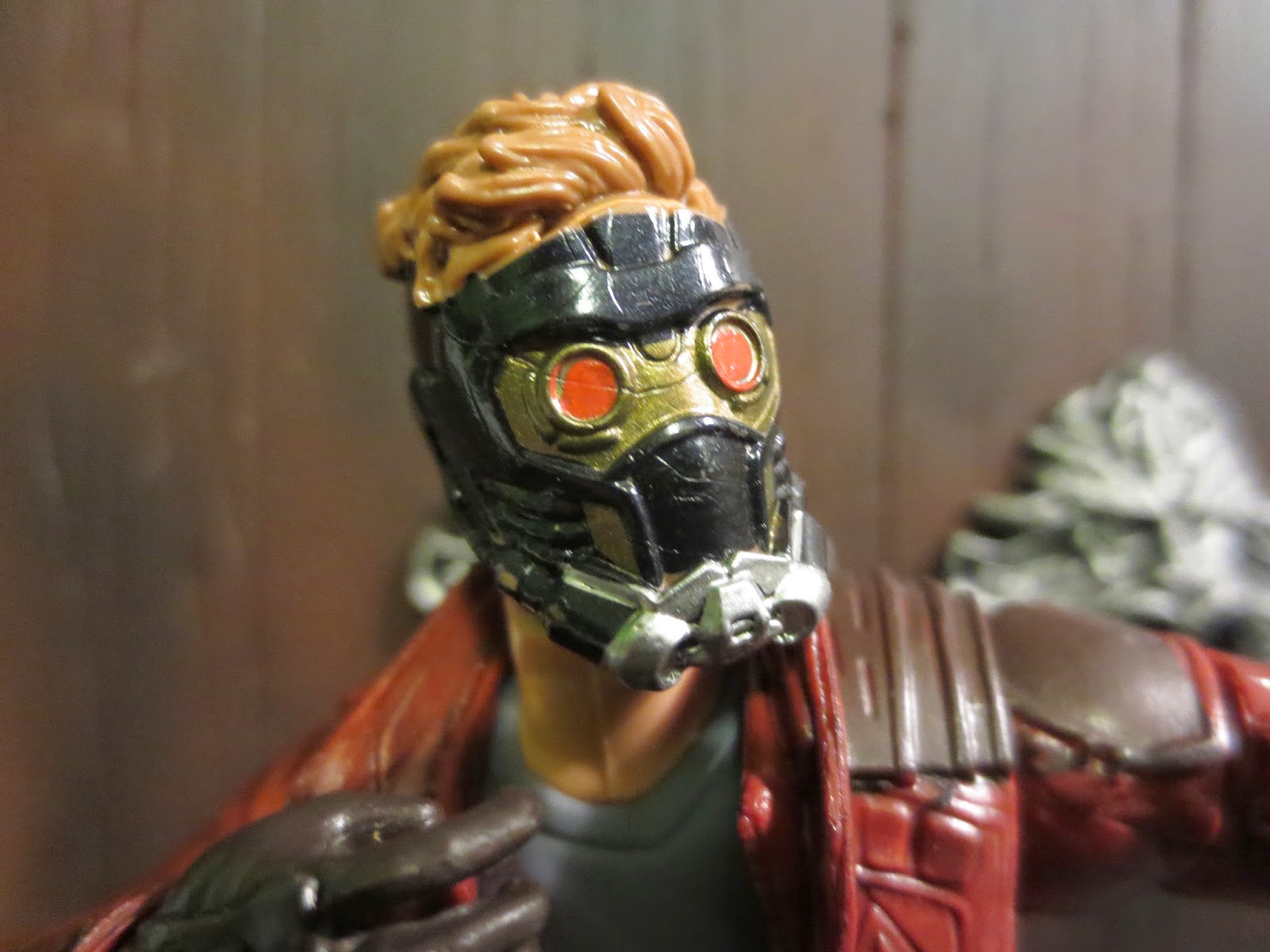