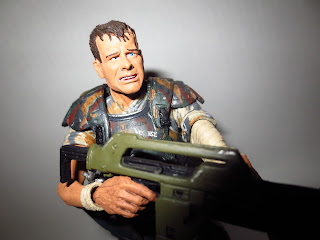 Despite being an R- rated property, there has always been something about the Alien franchise that has made it particularly toy-worthy, and has encouraged toy makers to try and market the film to kids, who always seem to be a receptive audience to a good man versus monster story.  I've talked about my personal experiences with the Kenner toy line (both here and here) that was based off of both the movie Aliens and a never-produced cartoon series; currently we’re seeing the never-produced Kenner line from the original 1979 film being made. Kenner tried again and put out a modest line for 1997’s Alien Resurrection, and companies like Galoob recreated various characters and vehicles in their Micro Machines line.  When action figures started being recognized as not just being for kids anymore, McFarlane Toys and Hot Toys also put out various creatures and characters from the film in a variety of scales and styles, and Mezco even put out some super cute versions of the film’s stars in their early Mezits releases.  Finally, NECA, who seems to truly be working to earn major cred with all fans of 1980’s action, is getting a crack at Aliens.  The first series of figures includes a Warrior Xenomorph, Corporal Hicks, and Private Hudson (played by Bill Paxton), who I’m looking at today.  I’m never sure if I think Bill Paxton is a good actor or not in his early roles, but I do know that he’s an actor whose presence I always enjoy in films. He just has a certain charm about him. He’s also one of the only two actors (along with Lance Henriksen) to have been killed by an alien (Aliens), a Predator (Predator 2), and a Terminator (Terminator). Pretty cool, huh? Anyways, there has been at least one other Hudson figure released, but it was largely a repaint of Apone, and certainly doesn't look much like Bill Paxton, although the figure does look to be in distress.  While this might be the only Bill Paxton figure I ever get to own, perhaps NECA will someday give us figures of Paxton's character as the punk leader from Terminator, Jerry Lambert from Predator 2 (although Danny Glover is the priority, here), and Dane from the criminally underrated Navy Seals (a movie I'm proud to say that, along with Street Fighter and Aliens, made up my entire LaserDisc collection).  Ready to check this figure out? Then join me after the break…. 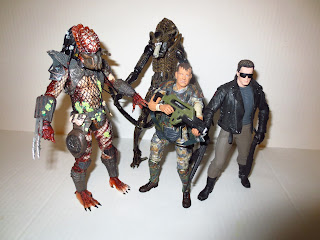 Private William Hudson comes in at 7 1/2 inches, putting him in line with most of the other action superstars that NECA has been putting out.  As always with their movie licenses, NECA strives for realism, and I think it's safe to say they achieved it here.  Seriously, you might mistake this figure for a man! 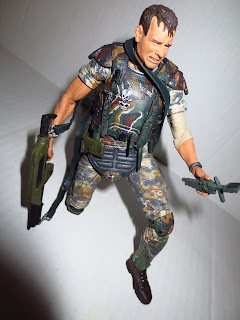 Hudson features many points of articulation to aid him in all of his alien encounters: hinged toes, ball jointed ankles, double hinged knees, swivel thighs, ball jointed hips, ball jointed torso, ball jointed shoulders, swivel biceps, ball jointed elbows, swivel and hinged wrists, and a ball jointed head.  The majority of Hudson's joints are fantastic, and give him an excellent range of motion.  The head and torso ball joints are particularly good.  The only joints that gave me trouble were the elbows and wrists. Because NECA painted on the skin tones, there's a bit of paint in the joints.  It took me a little bit to carefully and safely free up the joints, but now they work pretty well. The wrist joints feel a bit fragile, so be careful.  I'm impressed by how NECA has managed to hide so many of the joints: the elbows are sculpted to cover the joints, the bicep swivels are up underneath the hanging sleeves, and the knee joints are hidden by the knee pads.  Pretty nice work overall, just be a bit careful with the hands and arms when you first get the figure. 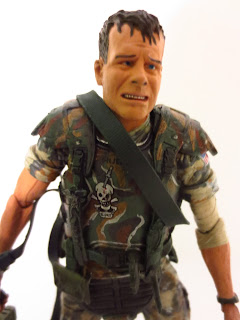 So, I don't think anyone can dispute that the body of the figure is just marvelous in the amount of sculpted detail it shows.  From the various folds and pockets on his BDU's to the leather and laces of his boots, there's nary a detail that NECA hasn't captured.  The armor and web gear are truly works of art. Using softer plastic to render all of these elements as separate pieces from the sculpt.  The body armor features multiple flaps, straps, and snaps, all of which combine to give it a realistic look.  I looked at some pictures of the actual Hudson costume (it was for sale on an auction site) an this thing seems to be perfectly rendered.  It even has some battle damage on the back.  The web gear is covered with useful tools, such as a knife in a sheathe, a grenade of some kind, multiple pouches, a snap to hold the welding device, and the silver eagle that Hudson wears.  OK, so now let's talk about the head sculpt. It's very scene-specific, referencing the scene where Hudson loses it and cries out, "That's it man! Game over, man! Game over!"  His hair is messed up, his eyes are squinting a bit, and he clearly looks distressed.  I personally feel that it's a pretty stellar attempt at capturing the emotion of the character. It's clearly recognizable as Bill Paxton, just with an extreme facial expression.  Some folks hate figures with extreme expressions (such as the blood spitting Rocky) but I feel they can add a lot to a display if done correctly. It sounds like NECA has another version of Hudson on the way, so if you really want a more neutral version of the character, wait around a bit. Still, this is my preferred choice. 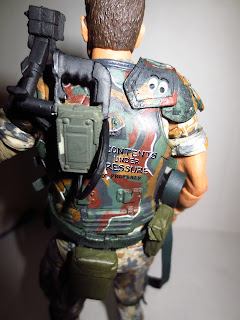 The first thing I noticed about Hudson which is different from other recent NECA movie lines like Rocky, Rambo, and Predator is that he features painted skin rather than having skin molded in a color matching his flesh.  I thought that method worked really well on those lines, and was hoping to see it here, too.  Still, the painted skin looks good. It's done incredibly well. My only problem is that it leads to some problems with the arm joints (which I mentioned above).  This figure features an amazing paint job, however, especially on his outfit and his armor.  The camouflaged elements of his outfit look startlingly real, and the paint work factors in the worn nature of these garments.  The body armor is also incredibly impressive, as not only does it feature realistic detailing, but it also features all of the little graffiti elements that Hudson has adorned his armor with.  On the front of the armor is a simple printed "Hudson," the name 'Louise' with a red ribbon underneath, and a skull with a knife through the skull and the word 'glory' underneath.  On the back there's a little pair of googly eyes on the right shoulder and the words "Contents under pressure; Dispose of properly."  Heck, on his right shoulder you can even see a tiny USMC logo.  The detail is amazing and tells a story in and of itself. 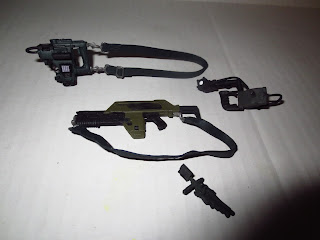 Hudson comes with plenty of accessories.  I tried to do a little research to learn more about some of the more obscure pieces. Hudson includes:
-M41A Pulse Rifle- The standard weapon of the USCMC, that was featured heavily throughout Aliens.  Molded in a nice solid plastic and featuring some intricate paintwork, this weapon is dead on accurate to it's big screen counterpart.  The sling is made of a rubbery material so that you can easily sling it around Hudson.
-TNR Shoulder Lamp- Attaching into the figure's back via a plug on the device, the TNR Shoulder Lamp's bulb is mounted over Hudson's left shoulder. The unit features a small wire that can fit into a small port on the back of Hudson's armor, and a handle so the device can be used handheld if needed.  Again, it's super detailed. Just be careful removing it from the figure.
-ME3 Portable Welder- Look on the left side of Hudson's web gear and you'll find this little piece. It's actually removable and features a little paint app of the visor you would look through when welding. Very cool little extra that is easy to miss.
-Motion Tracker- Exactly like in the film, this motion tracker will let you know that trouble's on the way. Well, it does that through a sticker attached to the "view screen."  Like the M41A Pulse Rifle, it's made out of a solid plastic with plenty of painted details, and features a softer sling so that Hudson can drag it along with him. 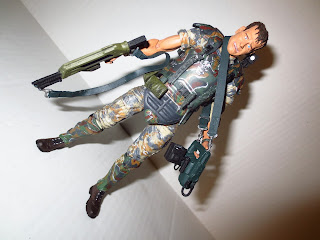 I love all of the accessories that Hudson comes with. NECA once again shows their attention to detail by including plenty of nice, detailed weapons.  They also give us quite a few accessories with Hudson, which is great.  I feel like some other companies would try to nickel and dime collectors on the included accessories, but NECA truly gave us a good value. 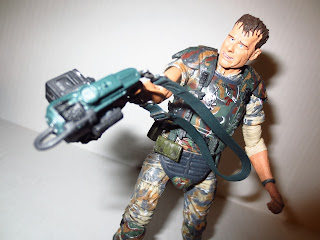 Holy hand grenades! NECA is on a roll! We've gotten figures from Rocky, Predator, Rambo, and now we're getting space marines from Aliens.  When the only complaint I have about a figure is that the paint on his arms stuck a little, that's a pretty minor nit to pick. Hudson features some of the best paint and sculpting on an action figure I've seen. And those accessories. Wow!  I'm really a huge fan of this figure and cannot recommend it enough. I hope that we get more of the team some day, or at least Apone, Drake, Vasquez, Bishop, and Ripley. Snag this guy now, man, anytime, anywhere. You'll be glad you did. 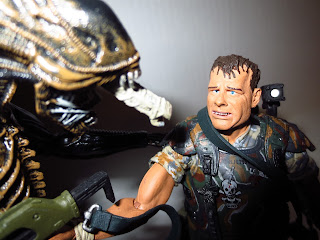