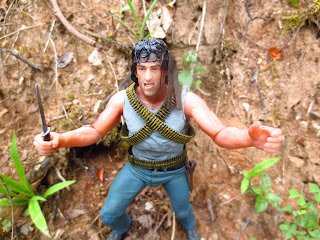 Once again, NECA is releasing an action figure of a pop culture icon and 1980's action hero that is incredibly faithful to the source material. This time it's John J. Rambo as portrayed by Sylvester Stallone in the 1982 film First Blood.  While Rambo has become so iconic that even his name is featured in the Oxford dictionary as a term for an aggressive man who pays no attention to rules or protocols, the film First Blood (and the novel by David Morrell which it's based on) is actually more of a tragic film. Dealing with the fact that he's now the last remaining member of his unit, Vietnam veteran and homeless drifter John J. Rambo just wants to walk into the town of Hope. Sheriff Will Teasle doesn't want any drifters or troublemakers in his town, and proceeds to eventually arrest an uncooperative Rambo.  When the local law enforcement begins to harass and torment the former soldier, Rambo begins having flashbacks to his time in a North Vietnamese prison camp. He violently makes his escape (although he intentionally doesn't kill anyone) and takes off into the nearby mountains, where he is pursued by local law enforcement and eventually the national guard.  They've given Rambo a fight he didn't want, but one he will finish if need be.  This figure portrays Rambo as seen in the excellent movie poster art from Drew Struzan, and as he appears in the film's climax when he takes an M-60 machine gun into the center of Hope for a final showdown.  Join me after the break, and I'll give you a review you won't believe! 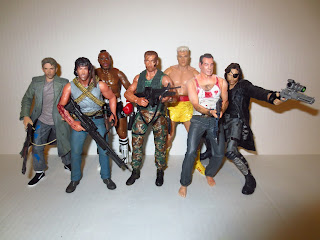 The best thing about all of NECA's movie based lines is that they fit together so well. They're all very realistic and in scale with each other. Rambo stands at 6 3/4 inches, which puts him in scale with other figures like Dutch from Predator, Robocop, and the Rocky figures.  Rambo and Rocky are actually the same height, which is great since Stallone is not the tallest guy (Rambo is only supposed to be 5'10).  The fact that I can now have a shelf of all of these 80's action icons in the same scale and style truly thrills the kid in me. 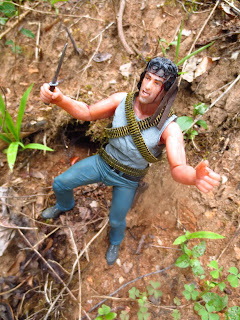 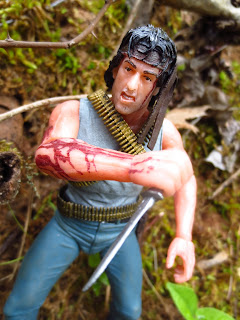 There's no doubt as to who this is. One look at the face, the tattered makeshift bandanna, and the unkempt hair, and you know this is Stallone as Rambo. The face, eyes, and lips are all definitely Stallone, although I would argue that with his thinner face, he looks closer to Stallone in Rambo: First Blood Part II and Rambo III than the younger First Blood version. Still, it's a heck of a sculpt.  Rambo's outfit is plain because of what he wears (jeans and a tank top), but not because of NECA's sculpting.  The jeans have a denim like texture to them, and all of the seams, pockets, and appropriate folds are present. Same goes for the tank top. Rambo's arms are appropriately muscular with a few visible veins, and actually, I believe these upper and lower arms might be reused from one of NECA's Rocky figures (they look nearly identical to the "Bloody Spit" Rocky from Rocky IV).  Additional details are the three "floating" ammo belts that Rambo is carrying. They're separate pieces wrapped around the torso, but they're not removable.  The sheathe for Rambo's hunting knife is also present on his left hip.  Look closely and you can even see the pouch for the rectangular sharpening stone. The knife will easily slide in and out of the sheathe, too. 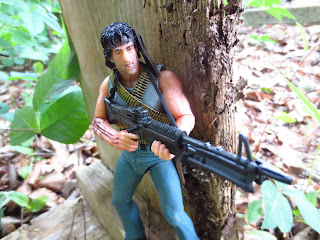 Here's the only category where I have anything negative to say.  First, the paintwork on the majority of the figure is exceptional--it's clean and well applied, whether we're talking about Rambo's boots, representing the fading that happens on denim jeans over time, or giving his tank top a nice weathered and worn look to it.  The biggest issue I have is with Rambo's skin tone.  NECA has been doing some excellent work in creating very realistic skin tones on their characters (just look at their Rocky and Predator lines) and while they succeed with Rambo's arms, his face looks a little pale.  It's not terrible by any stretch of the imagination, but it is the only weakness that I really care about on an overall stellar figure.  The rest of the paint details, such as the blood on Rambo's left arm and the stubble on his face, are really well applied. 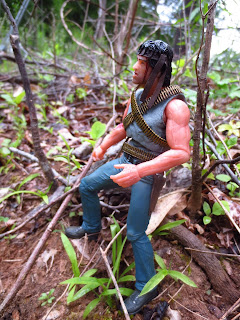 What would Rambo be without his weapons? Still a killing machine, but perhaps just a slightly less efficient one. Rambo comes with three accessories: his hunting knife, an additional hand designed to hold the hunting knife, and the M-60 machine gun he steels from the National Guard truck near the end of the film.  The swappable hands was a good idea, as the M-60 and the knife are such different sizes that he couldn't hold both convincingly with the same hand.  I found the hand to be a relatively easy swap, although using a hair dryer or hot water briefly might make it easier and safer in the long run.  The hunting knife is Rambo's primary weapon, and has become almost synonymous with the character.  Check out this articleon Rambo's knife from the first film. Overall, I think NECA did a great job translating such a small accessory from film to figure.  The M-60 is done nicely as well, although I wish the strap were a bit longer.  An M-60 only weighs around 23 pounds, so it makes sense that Rambo could tote this bad boy around with ease.  Oh, and it's capable of firing 600 rounds per minute. Looking at various pictures of the gun from both the film and other sources, it looks like NECA translated this well. While you may not be able to get Rambo in every firing position you want, you should be pretty successful in getting most poses. 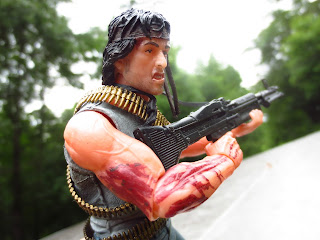 Not only do I love this figure, but I want more. NECA has a"Survival Rambo" coming out later this year, but I hope we also see figures from the other three movies in the series, as well as a jacket-clad Rambo with a duffel bag from the beginning of First Blood.  He's such a cool character, and NECA has done such a great job that I'm really looking forward to an expansive collection. I collected the Rambo and the Forces of Freedomtoys as a kid, so it'd be cool if NECA began releasing some homages to that line in the future, much in the same way they've released homages to Kenner variants in the Robocop and Predator lines. While the face skin tone doesn't perfectly match the rest of the body, this is still a really fantastic figure. I snagged mine from Big Bad Toy Store, although he's currently sold out. It's definitely worth your hard earned scratch to have this drifter and troublemaker on your toy shelf. I'll confirm him Great and a 1/2. 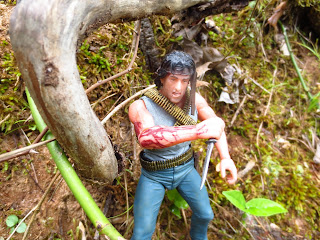