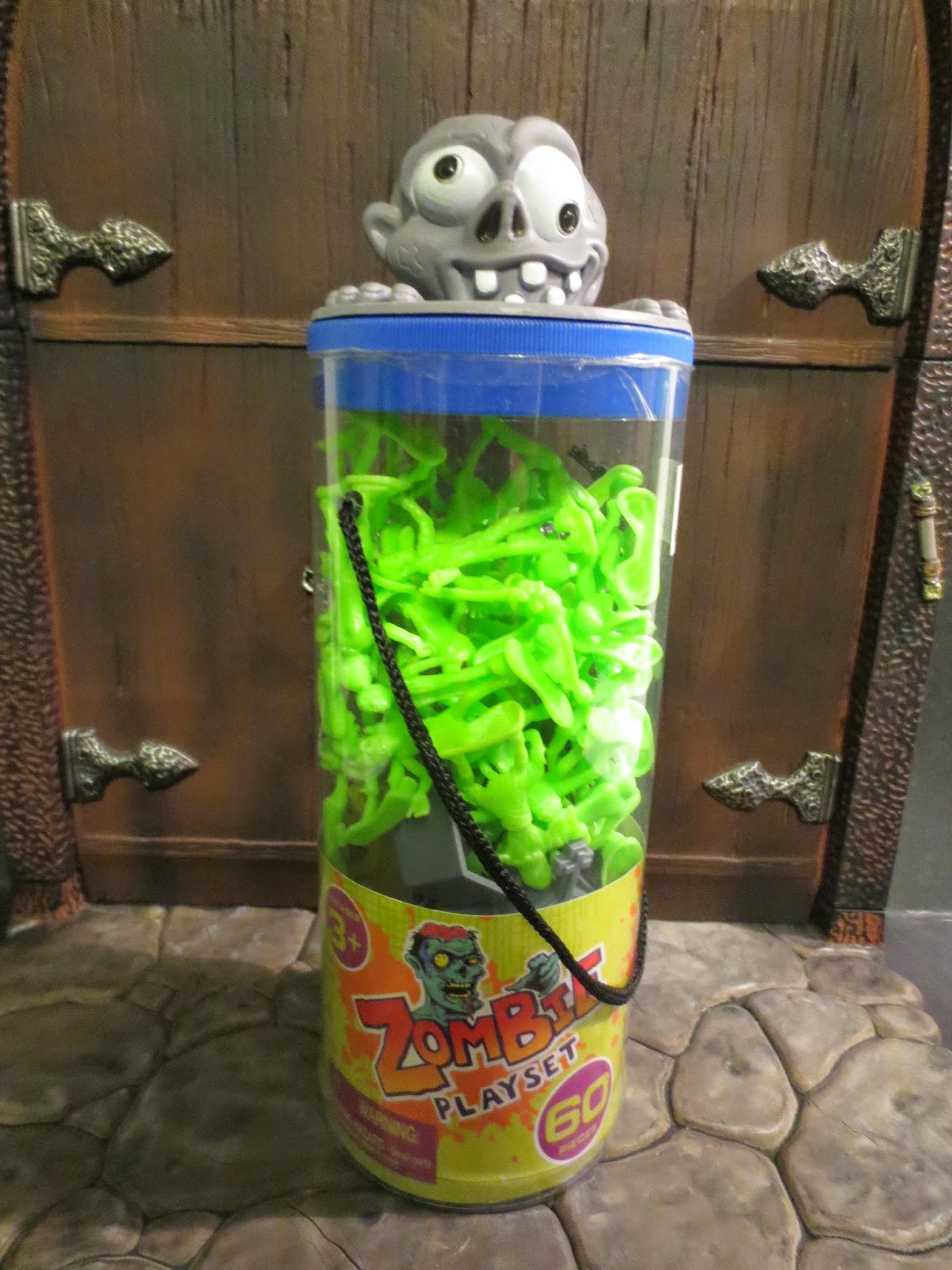 I can't tell you how many tubs, bags, or tubes of plastic zombie minifigures I've bought over the past few years. Having loved zombies ever since I was pretty young (and believe me, there wasn't an abundance of zombie stuff back in the late 80s and early 90s like there is today) I would have flipped out if given the opportunity to own any of these sets. Anyways, this tube of figures was another recent gift from my mom. She knows that I like minifigures, use little plastic army guys as geocaching swag, and will review pretty much anything that shows up at my house. So once again, as I'm talking about these little plastic minifigures just pretend that you're reading the instruction manual for an old NES game. You know, one that gives elaborate descriptions and character to simple pixelized enemies. Let's pretend that these zombies are from some never produced NES game that's kind of like an earlier version of the classic Zombies Ate My Neighbors. Sound good? You better believe it does!... 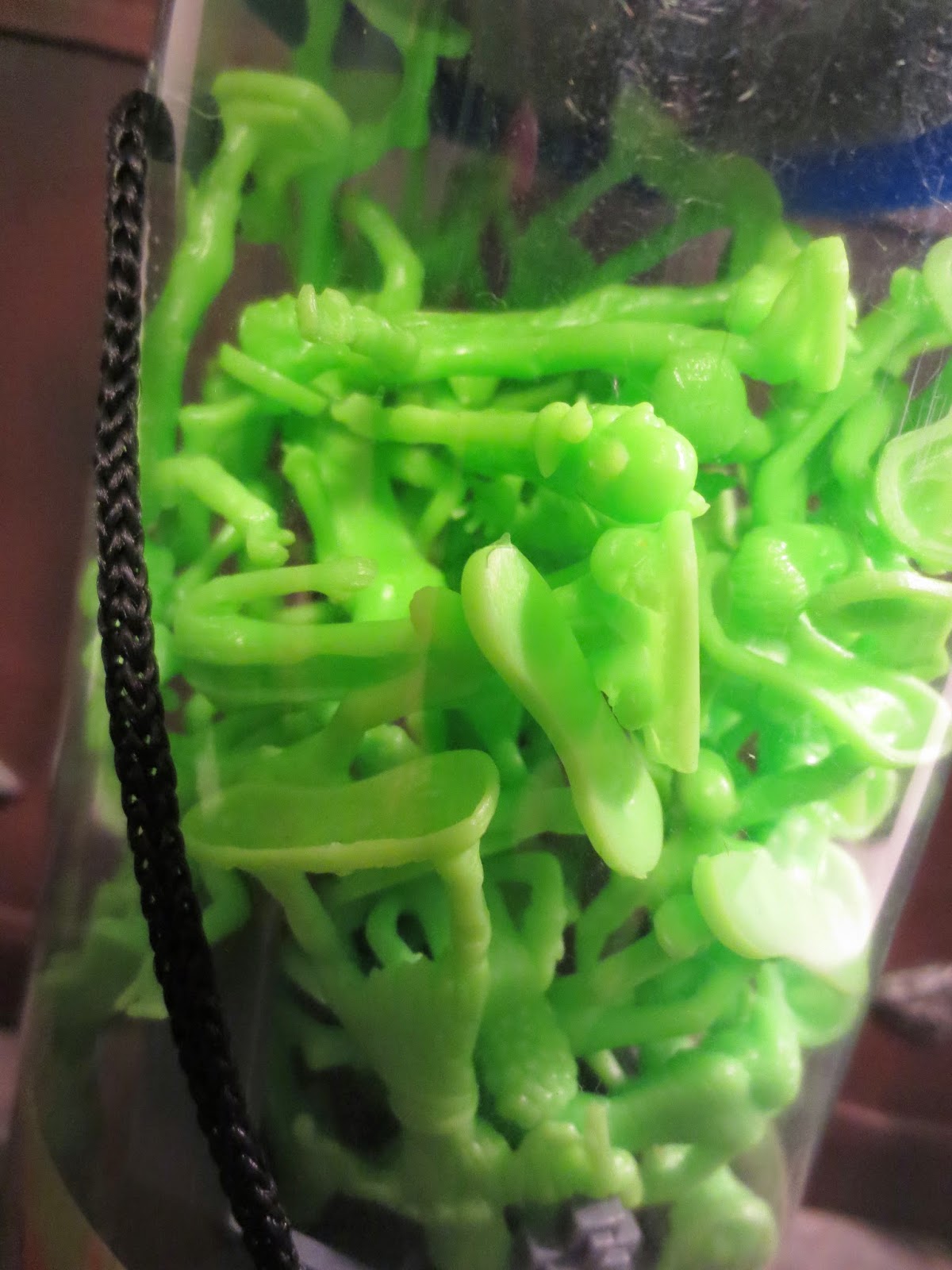 The Facts:
Height: Around 1 7/8ths inches 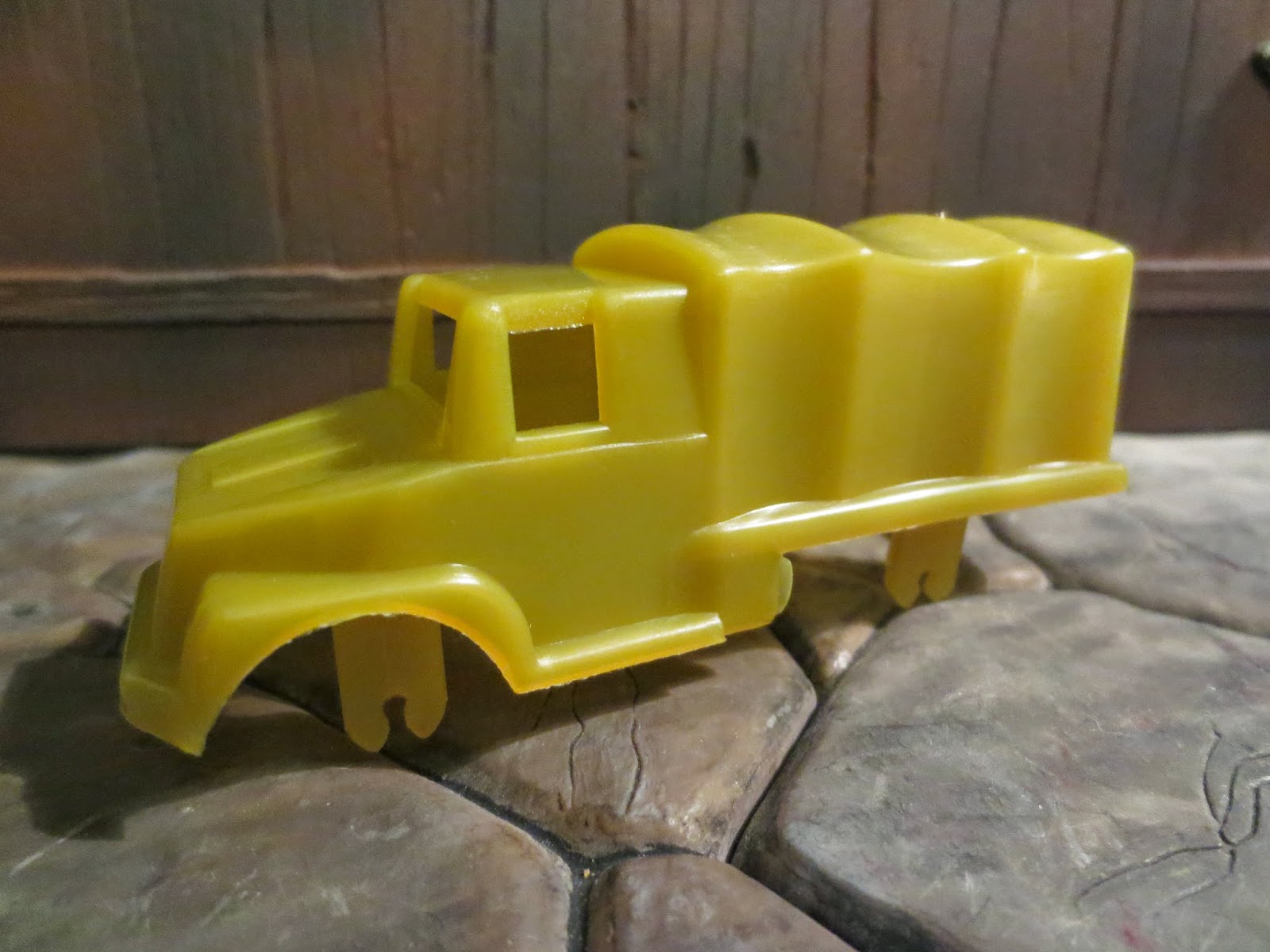 (Note: Like the bombers in the Defender Military Set, these trucks have no wheels. They've got the grips for the axles but no wheels. I guess they're supposed to be ruined cargo trucks or something.) 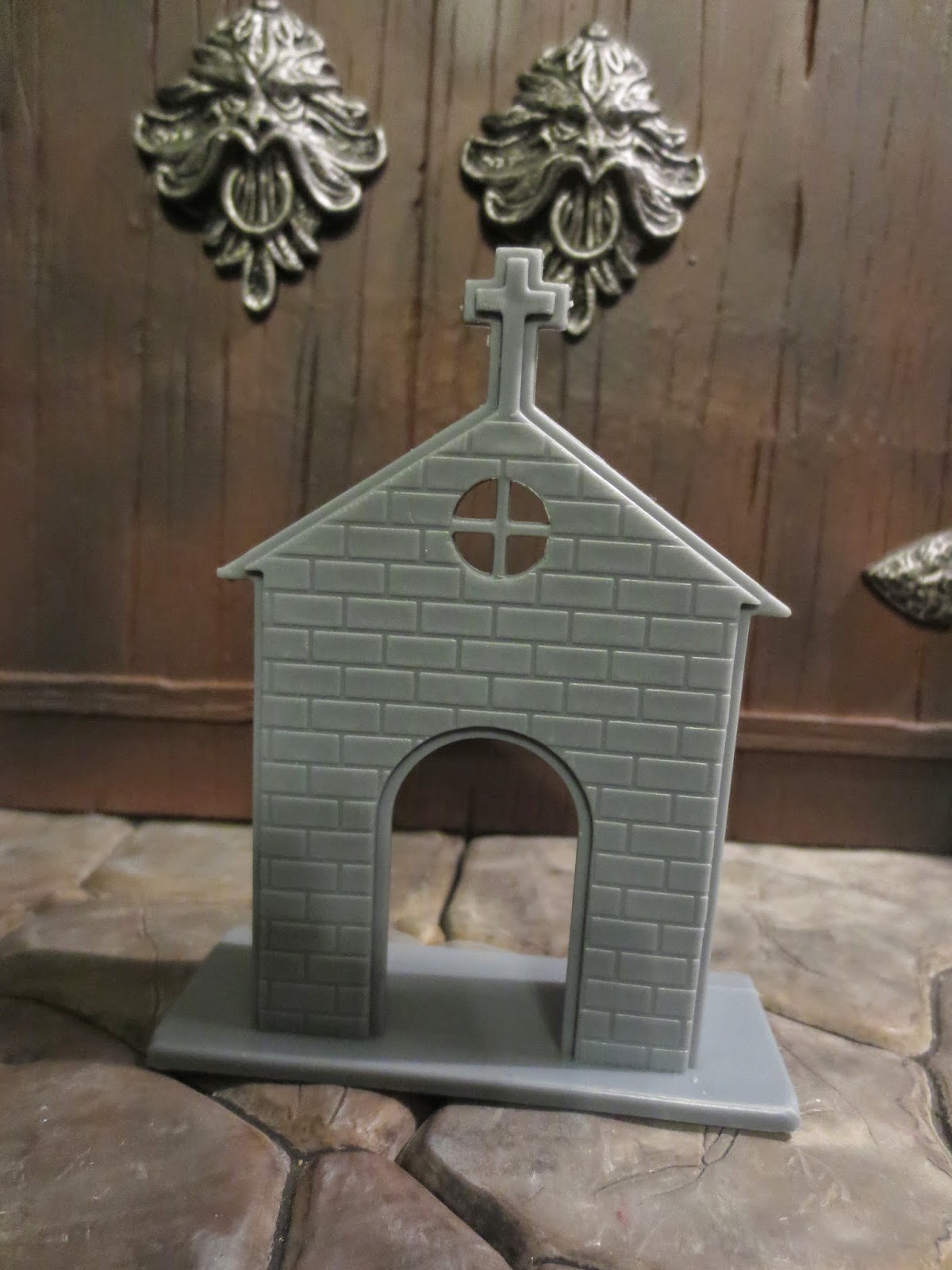 Mausoleums: These decrepit crypts are filled with zombies! They will continue to spawn zombies until you destroy them. Hint: Sometimes it is better to flee!

(Note: This thing is awesome and will surely get used in photos and Dungeons and Dragons games.) 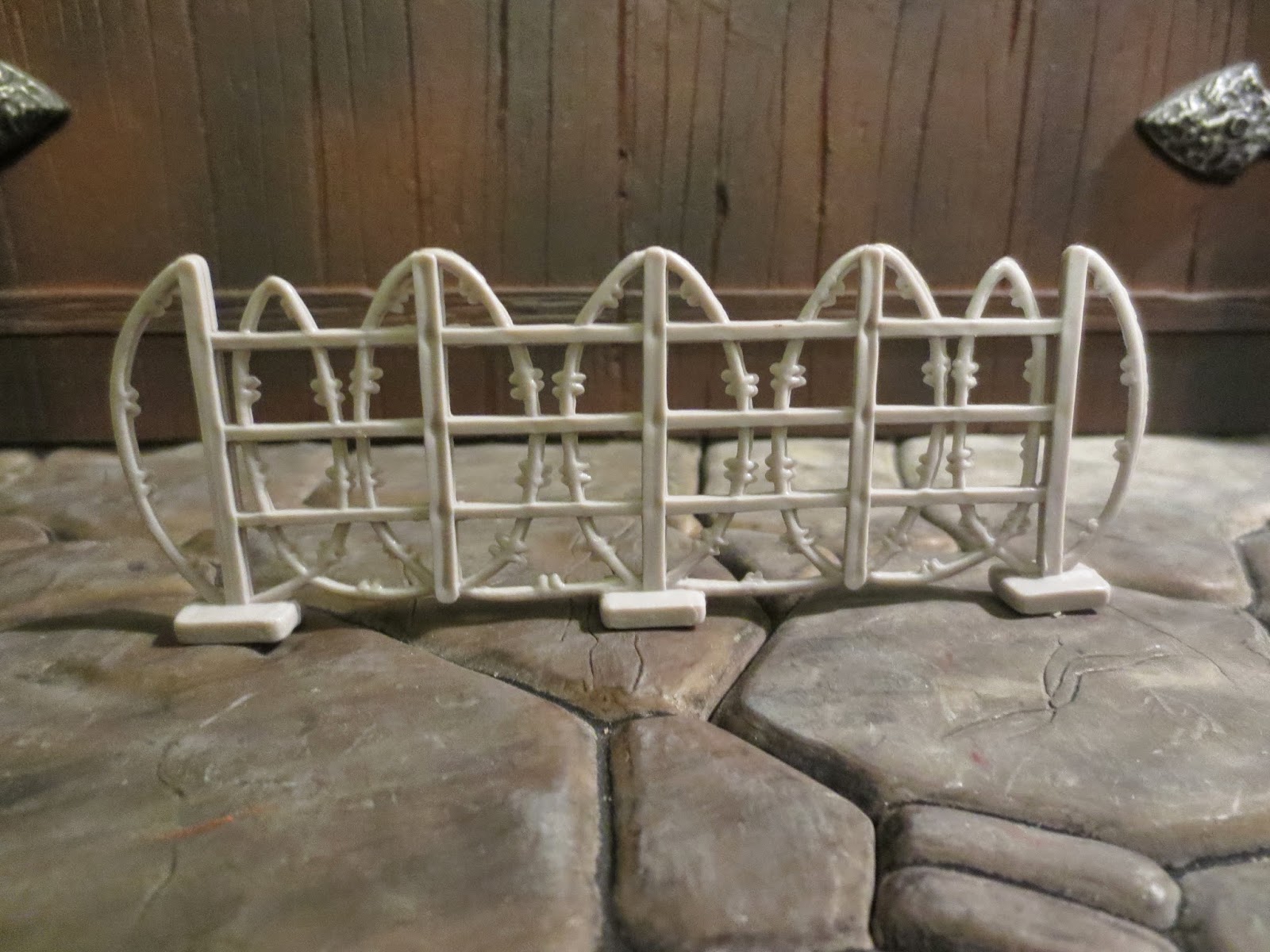 Barbed Wire Fence: These fences were placed to help control the zombie menace! Covered in barbed wire, zombies are reluctant to cross them. Use them to your advantage! Just watch out: They can cut you, too 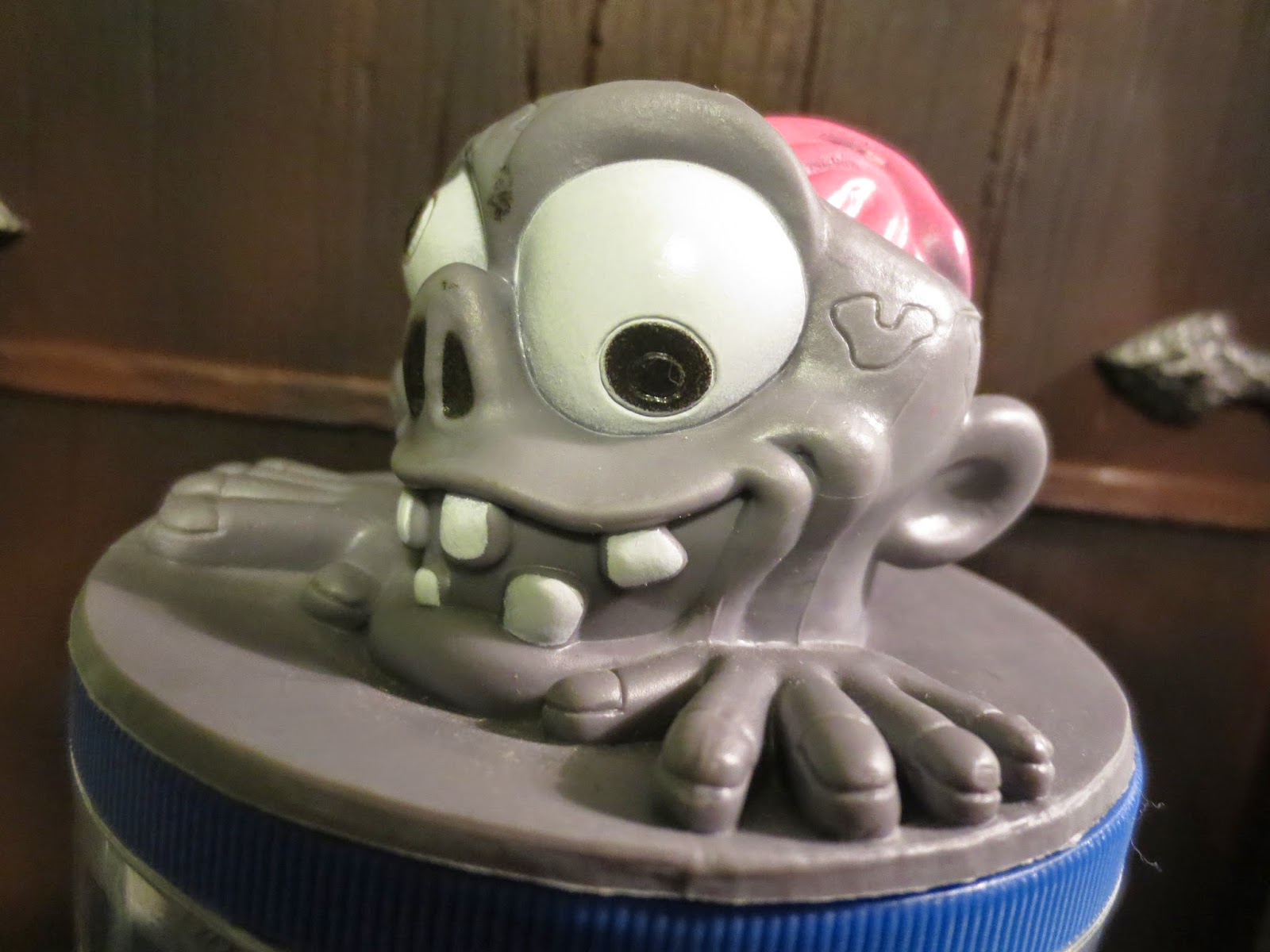 (This guy is attached to the lid of the tube and is really part of the packaging, but he's pretty slick.) 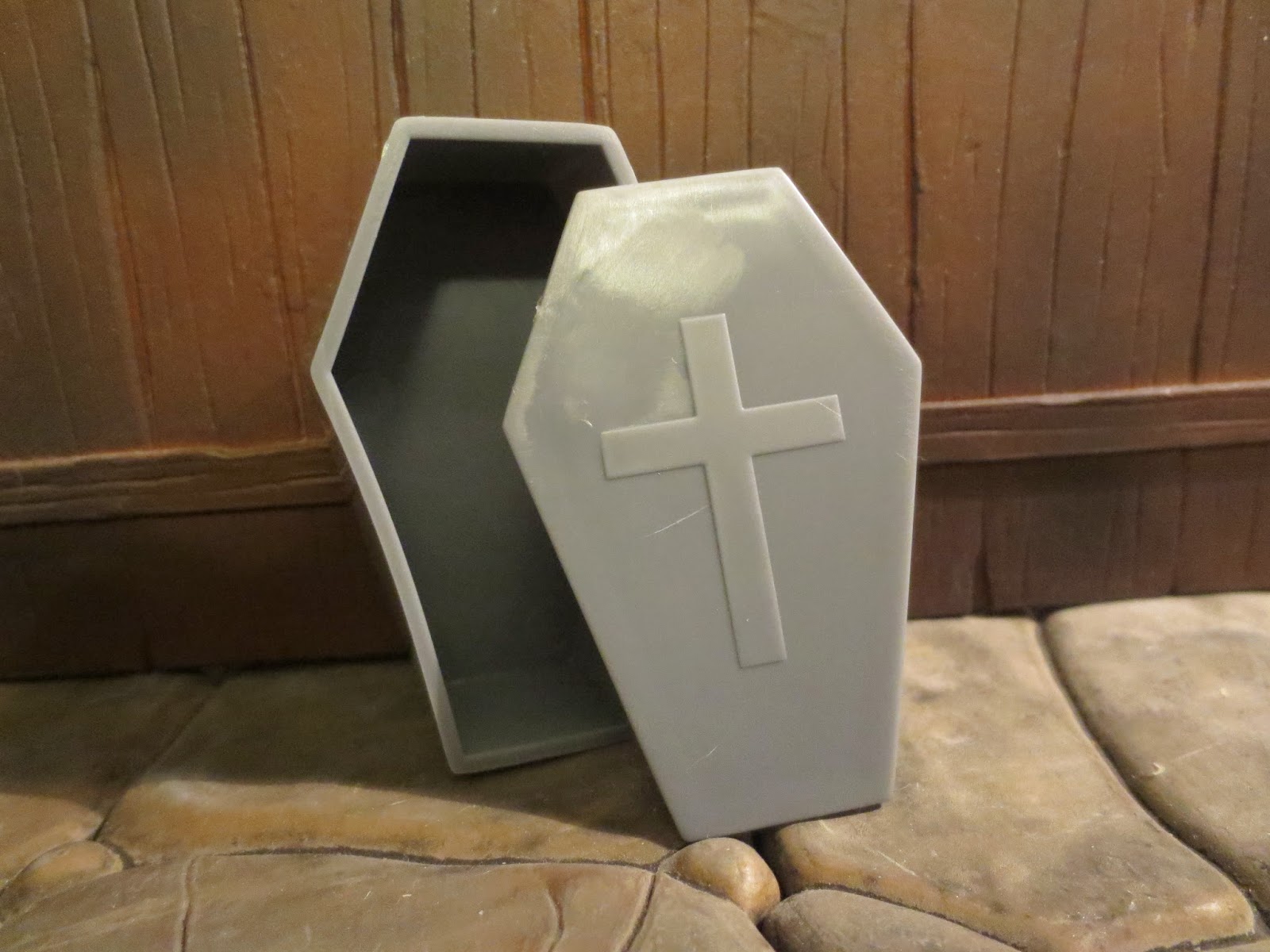 Caskets: Caskets can be broken open in order to find power-ups. Look out, though: You might find a zombie minion inside, too! 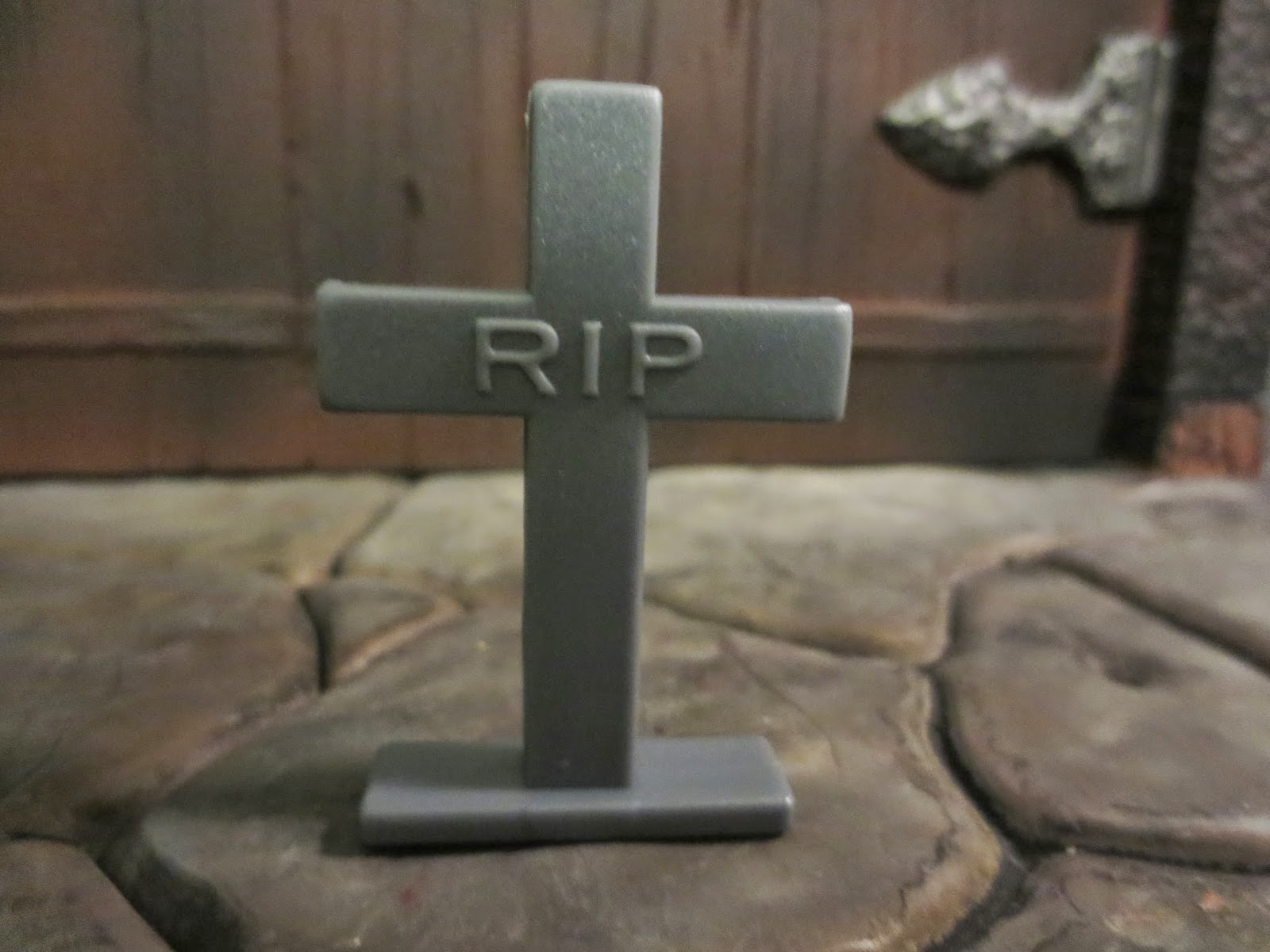 Cross Tombstone: The holy aura of this tombstone allows you to heal all of your energy! Also serves as a restart point mid-level. 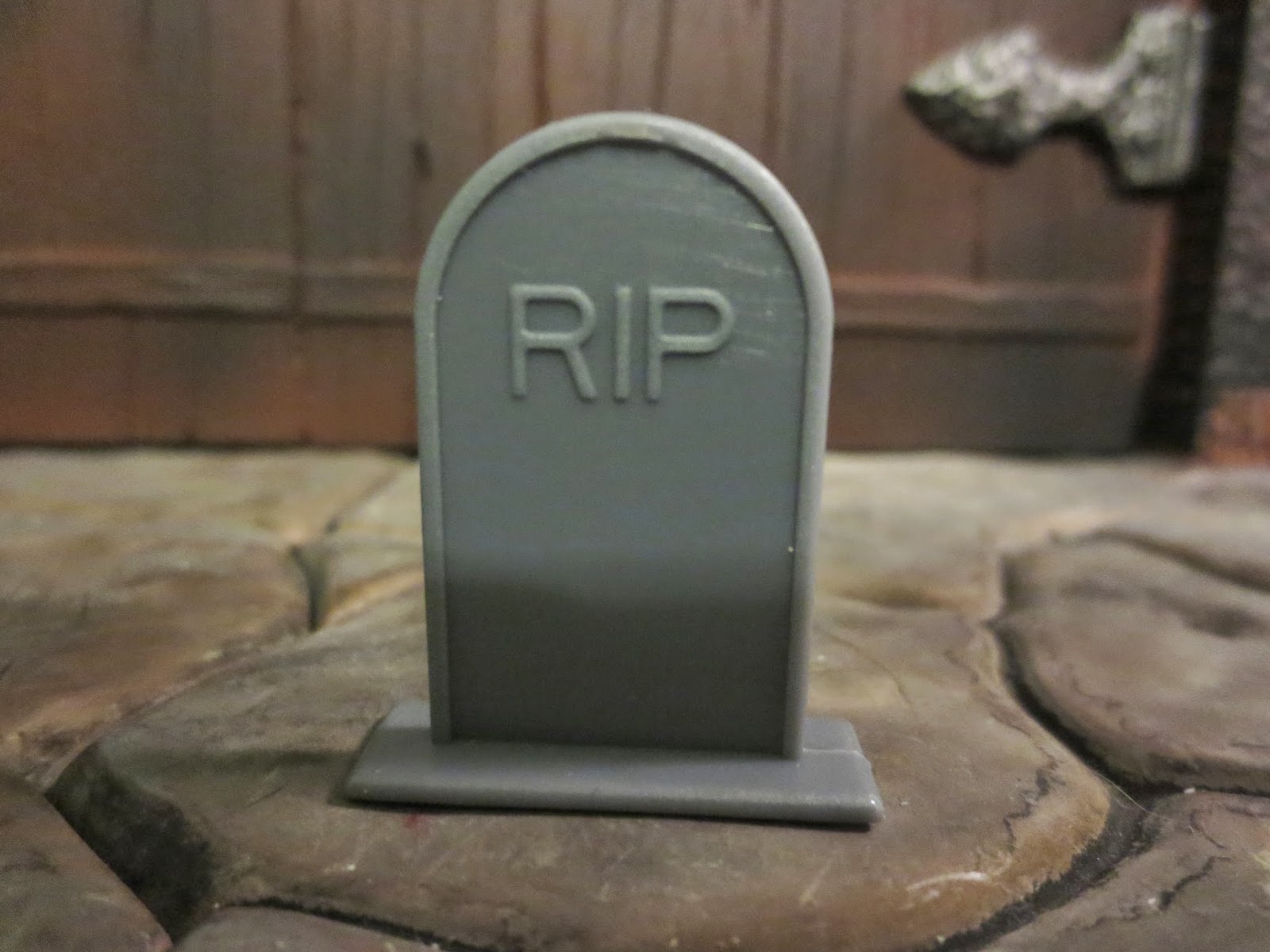 Tombstone: Destroy a tombstone for 100 points! An extra life is awarded every 10,000 points so bust away! 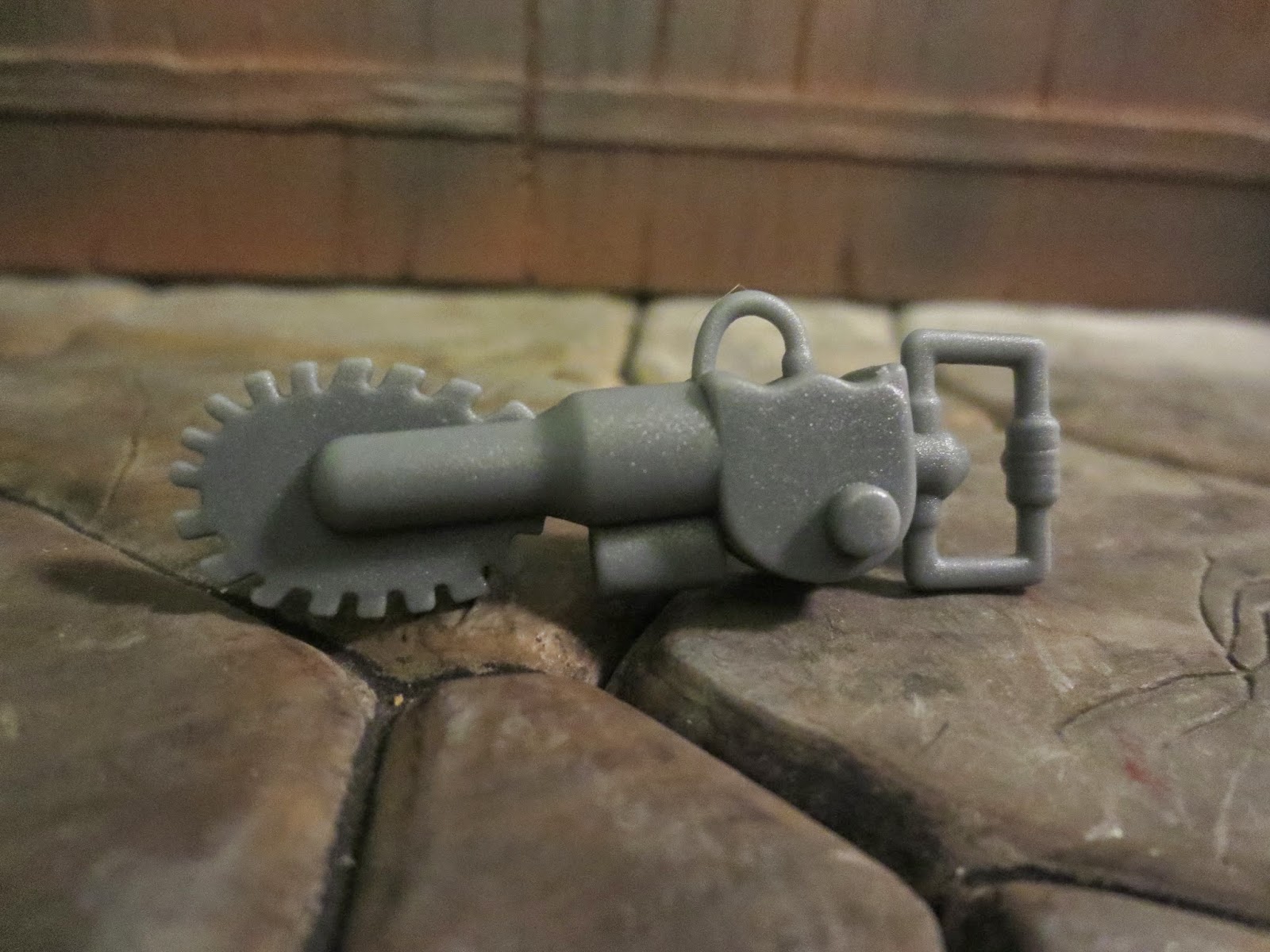 Chainsaw: More powerful than your standard pistol, the chainsaw lets you cut through zombie minions with ease. Watch out, though! It can run out of fuel if used too much!

(By the way, this thing is probably more in scale with a Minimate or a Lego minifigure than these zombies.) 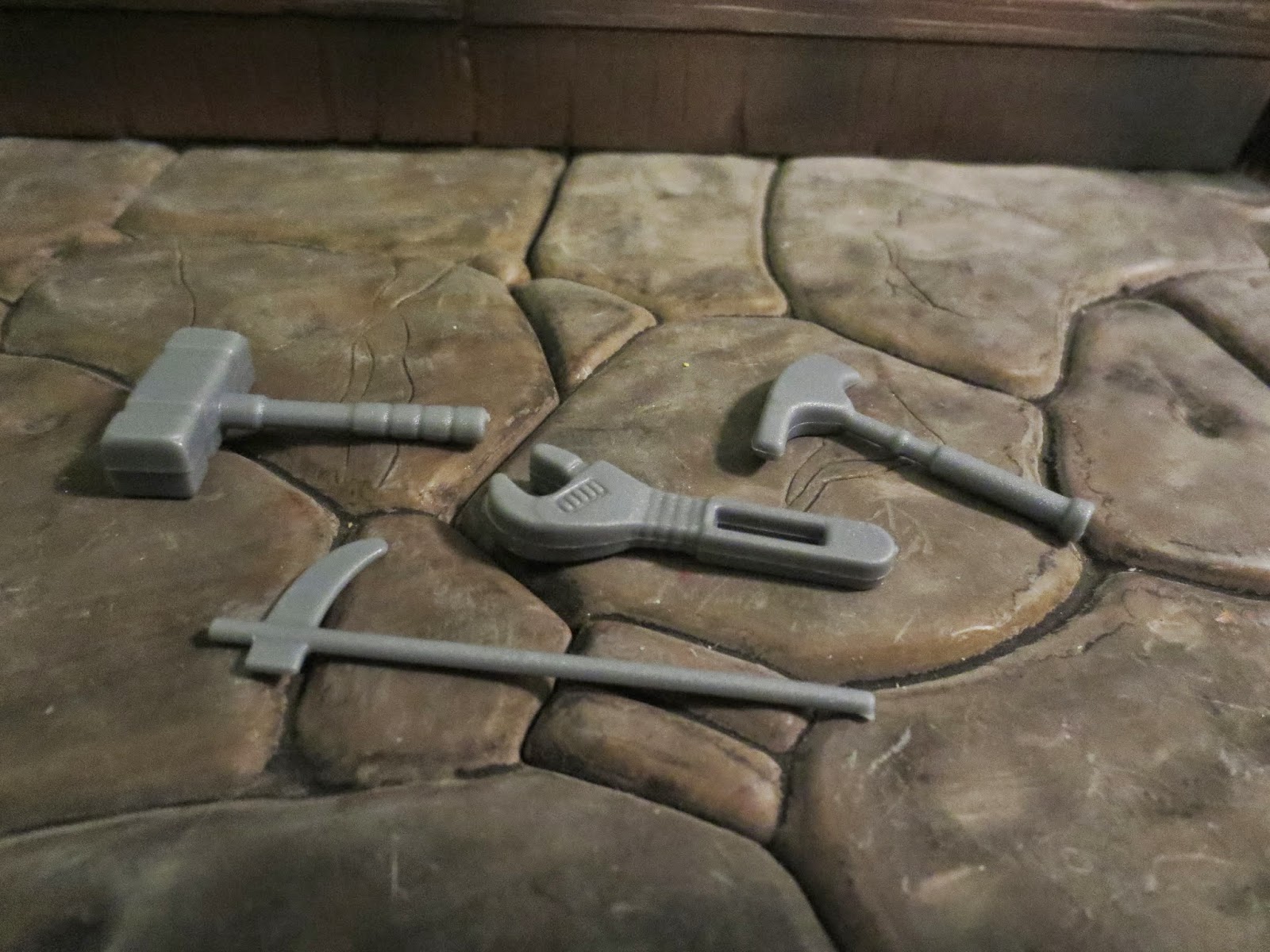 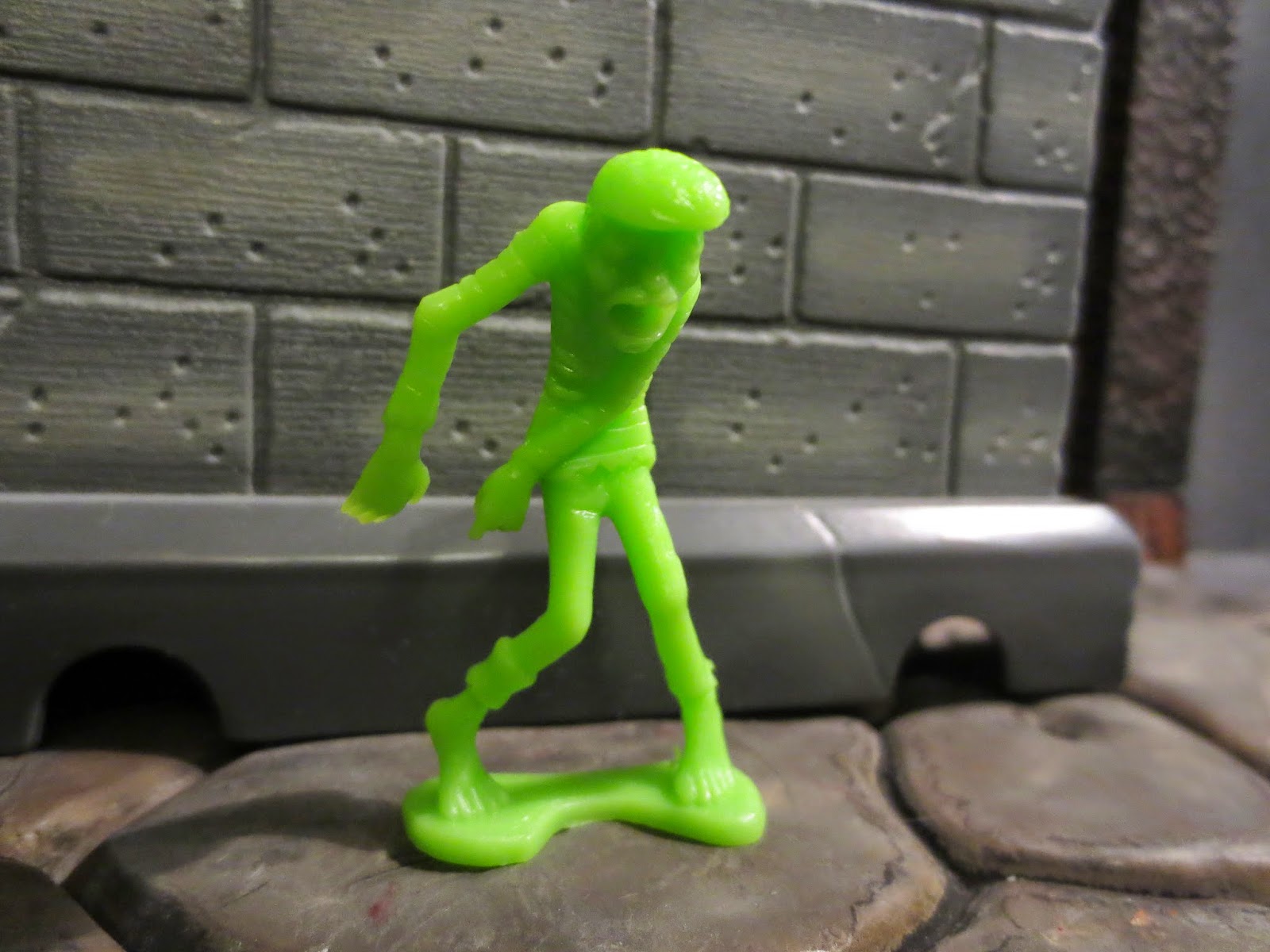 The Shuffler: With his wicked pompadour and his hip bandages, this undead dancer has all the wrong moves! He moves quickly and dances across the screen chasing his prey! Don't get caught! 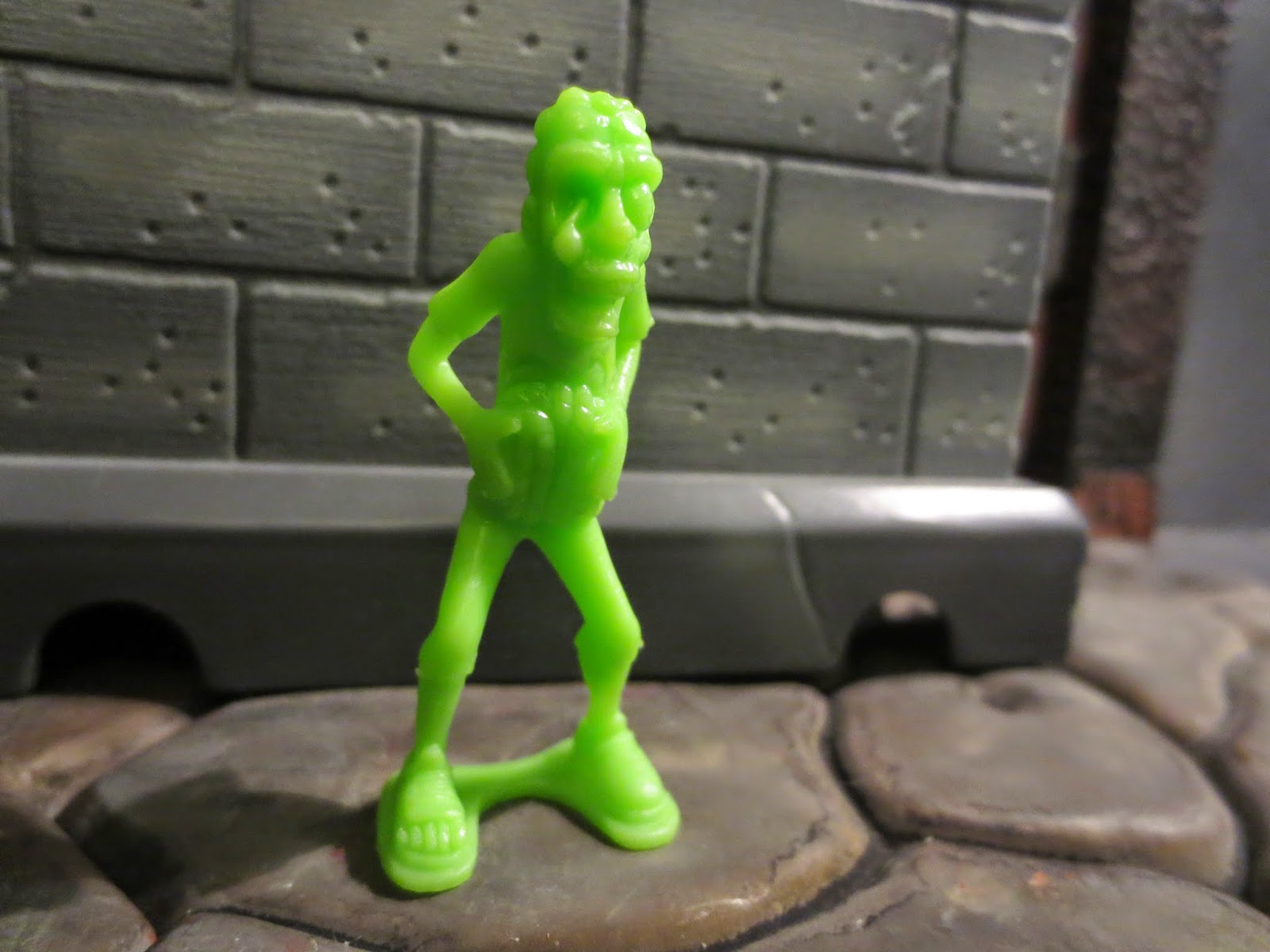 Gut-Bomb Gus: Whatever this zombie minion ate isn't agreeing with him! Gut-Bomb Gus waits in one place until he spots his prey; then he chases after them and explodes! Take him out from a distance or trap him on a barbed wire fence! 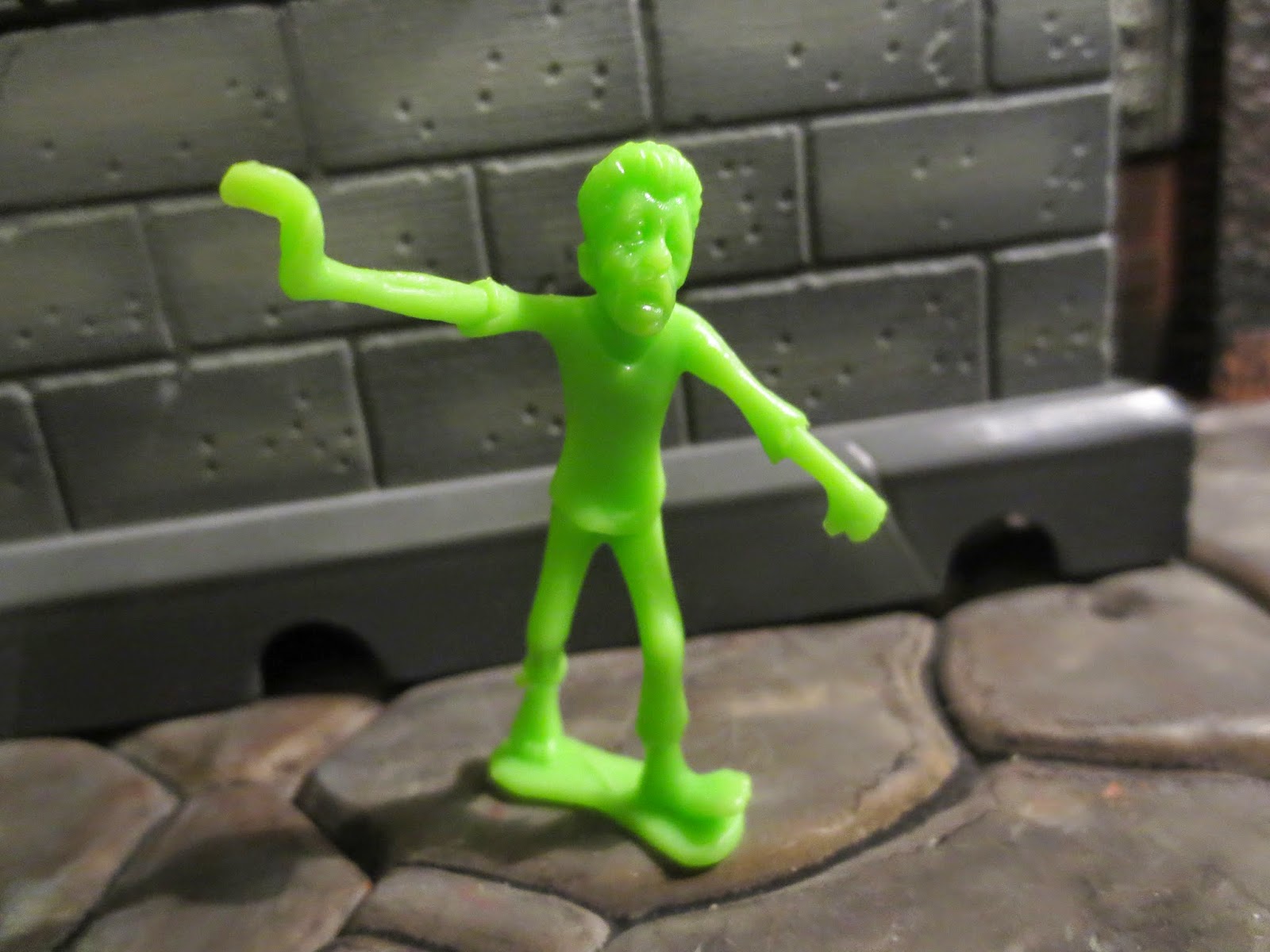 Stiff: Stiff moves slowly and reaches out for his prey. One Stiff isn't much of a problem but multiples might be! Don't let them add up! 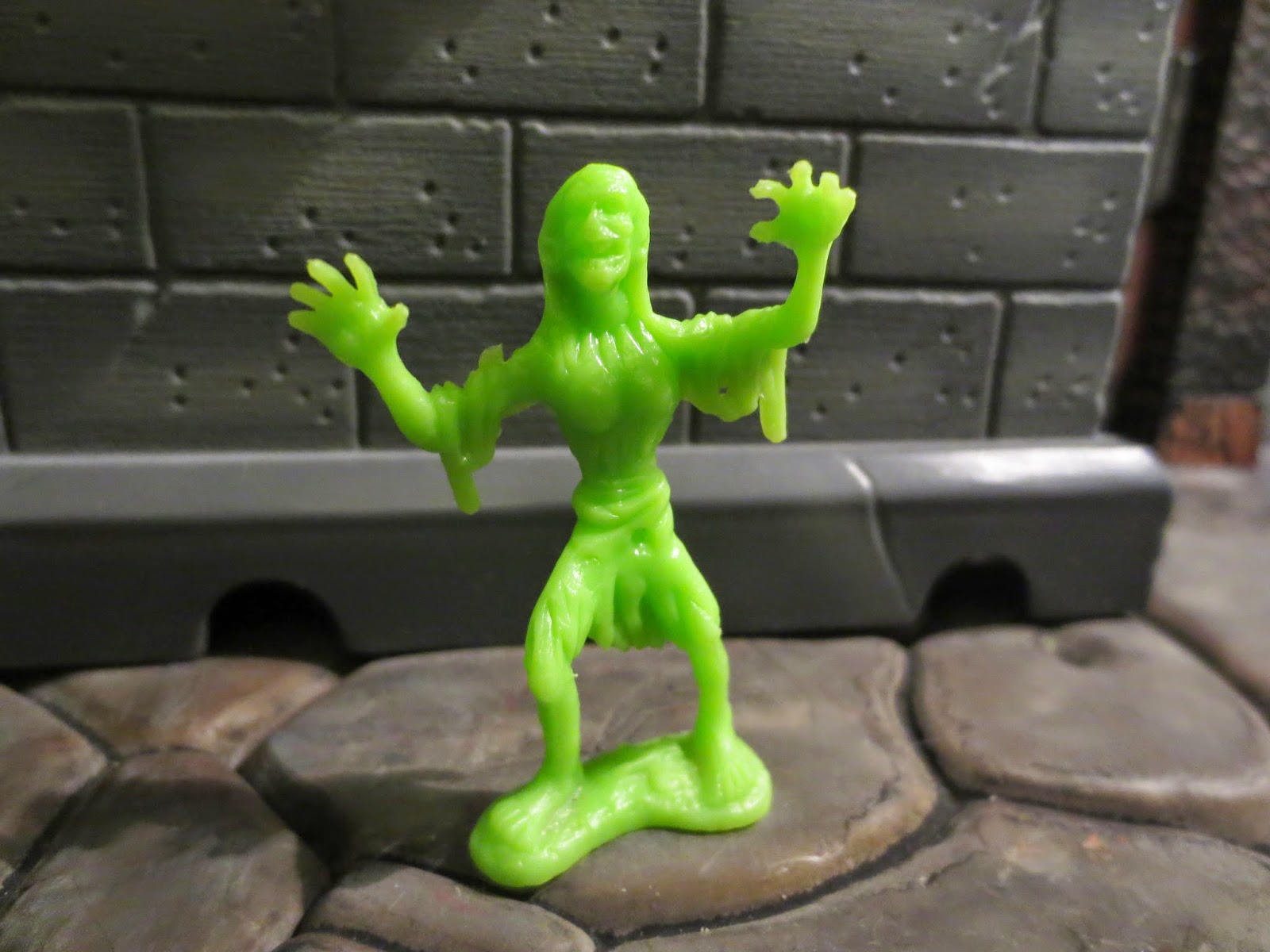 Wet Scream: These formerly lovely ladies pop out of bodies of water and puddles to chase unsuspecting victims! Be on your guard anytime you have to be near water (yes, even swimming pools!). 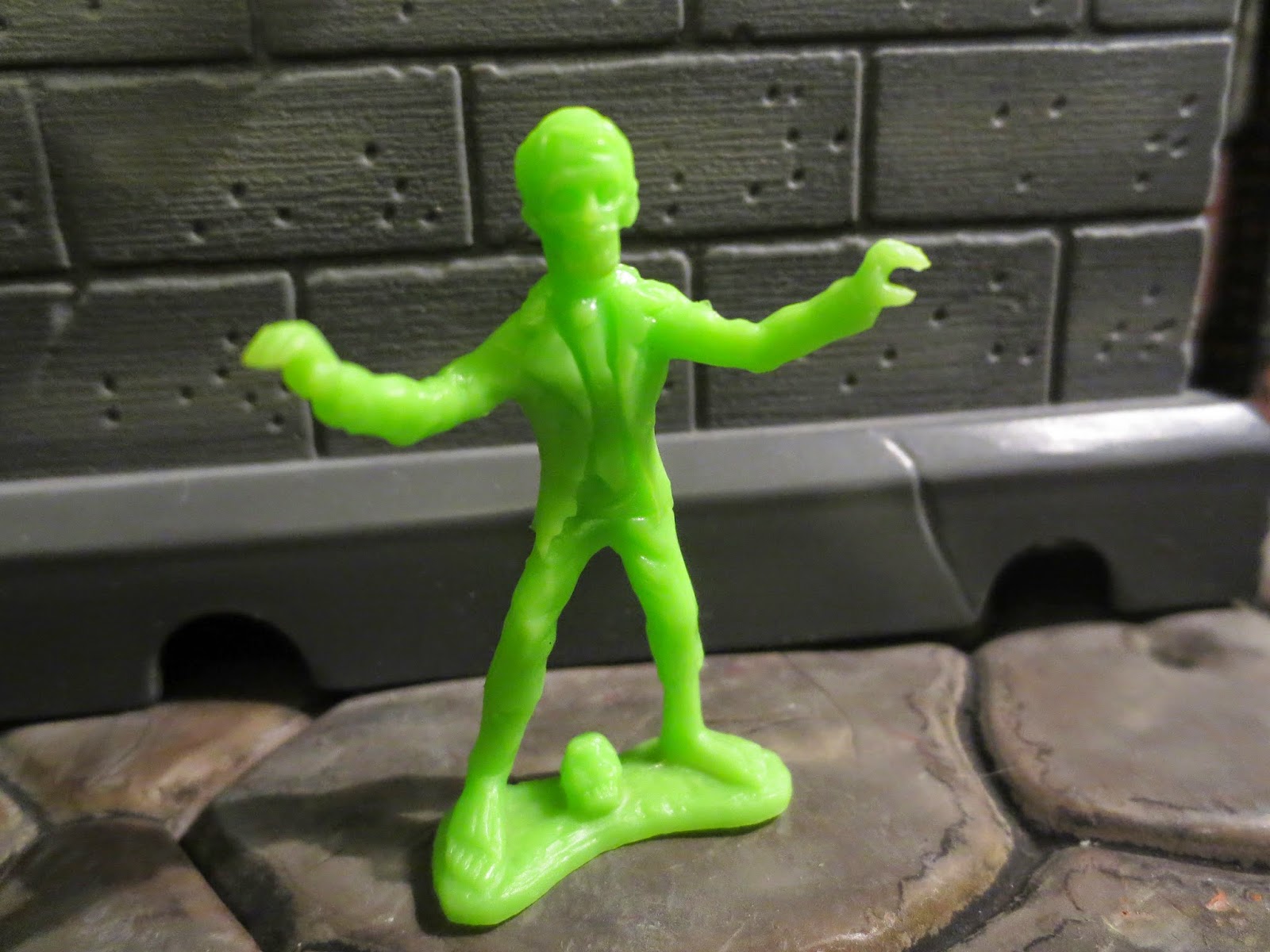 Working Stiff: Working Stiffs act just like regular Stiffs except they have better fashion sense and a 401k. As with Stiff, they can cause trouble in larger groups! 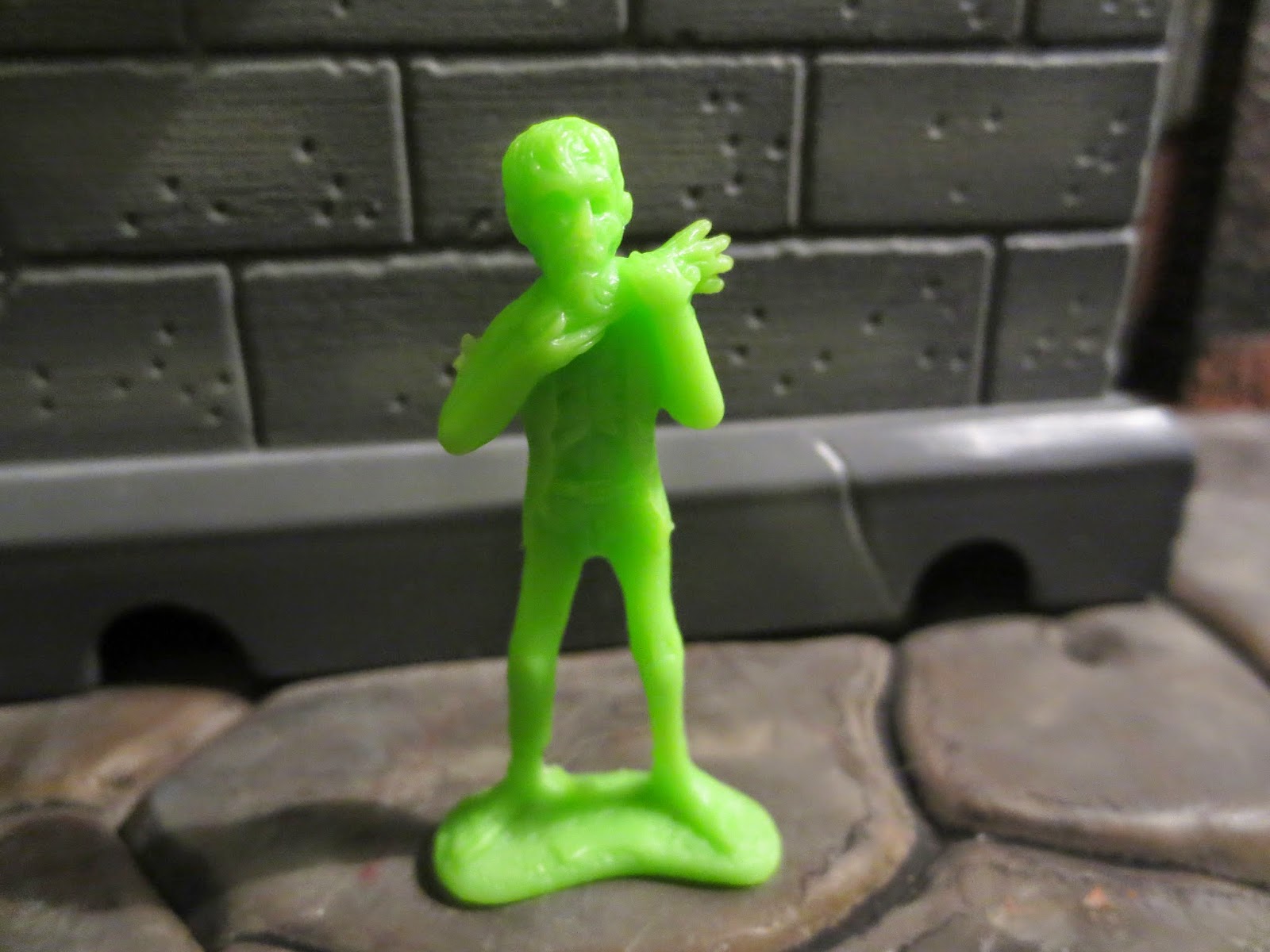 Hungry Harry: Hungry Harry will eat anything! Plants, zombies, and even people! He's incredibly fast but will stop near any dead body he finds. Run past the bodies of other zombies you've already eliminated to slow him down! 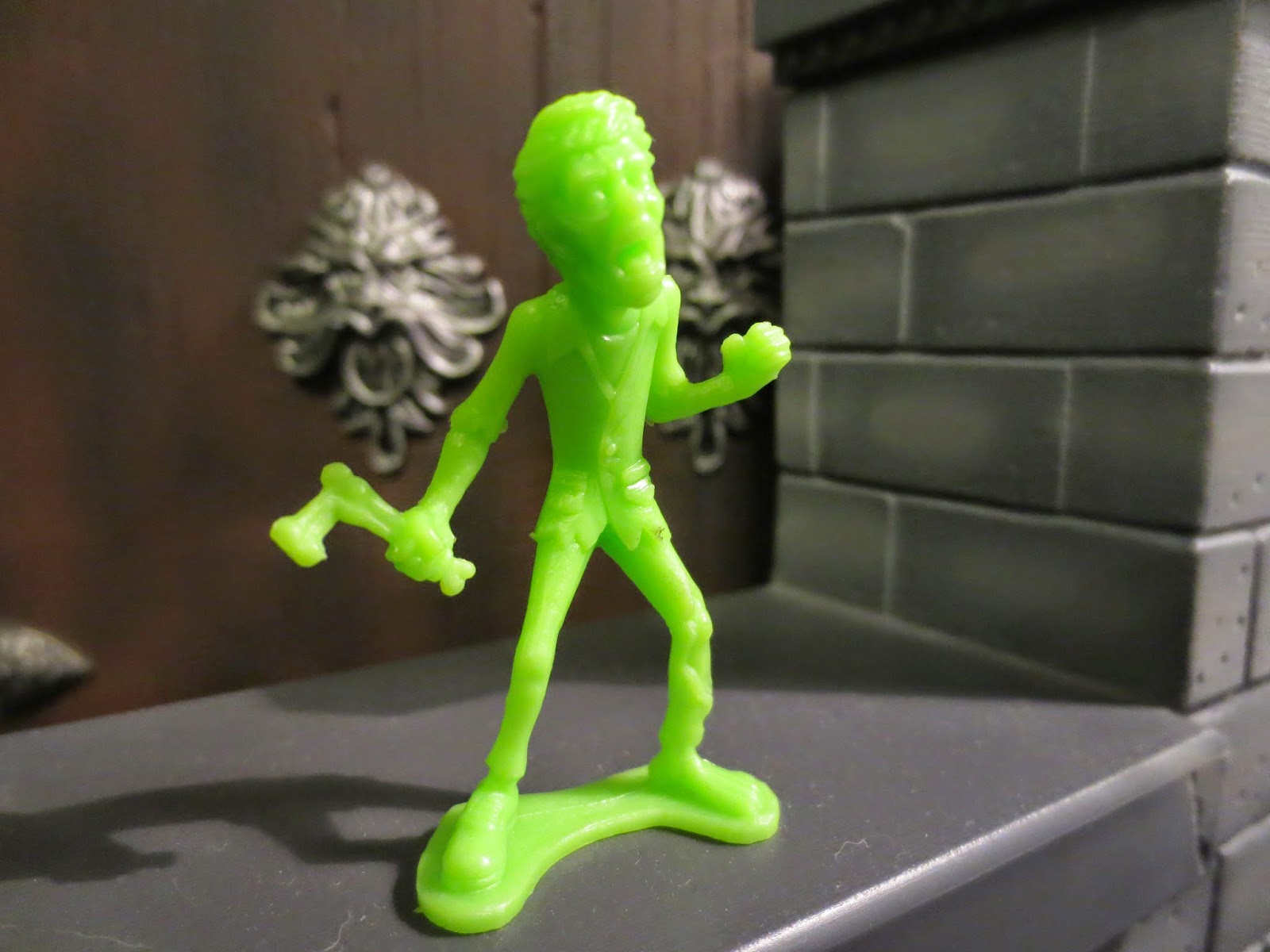 Bone-a-rang: Bone-a-rangs are unique from their other zombie brethren in that they've learned to make simple tools! Bone-a-rangs are equipped with seriously sick bone boomerangs which they throw at their victims. Keep your distance or attack them from behind! 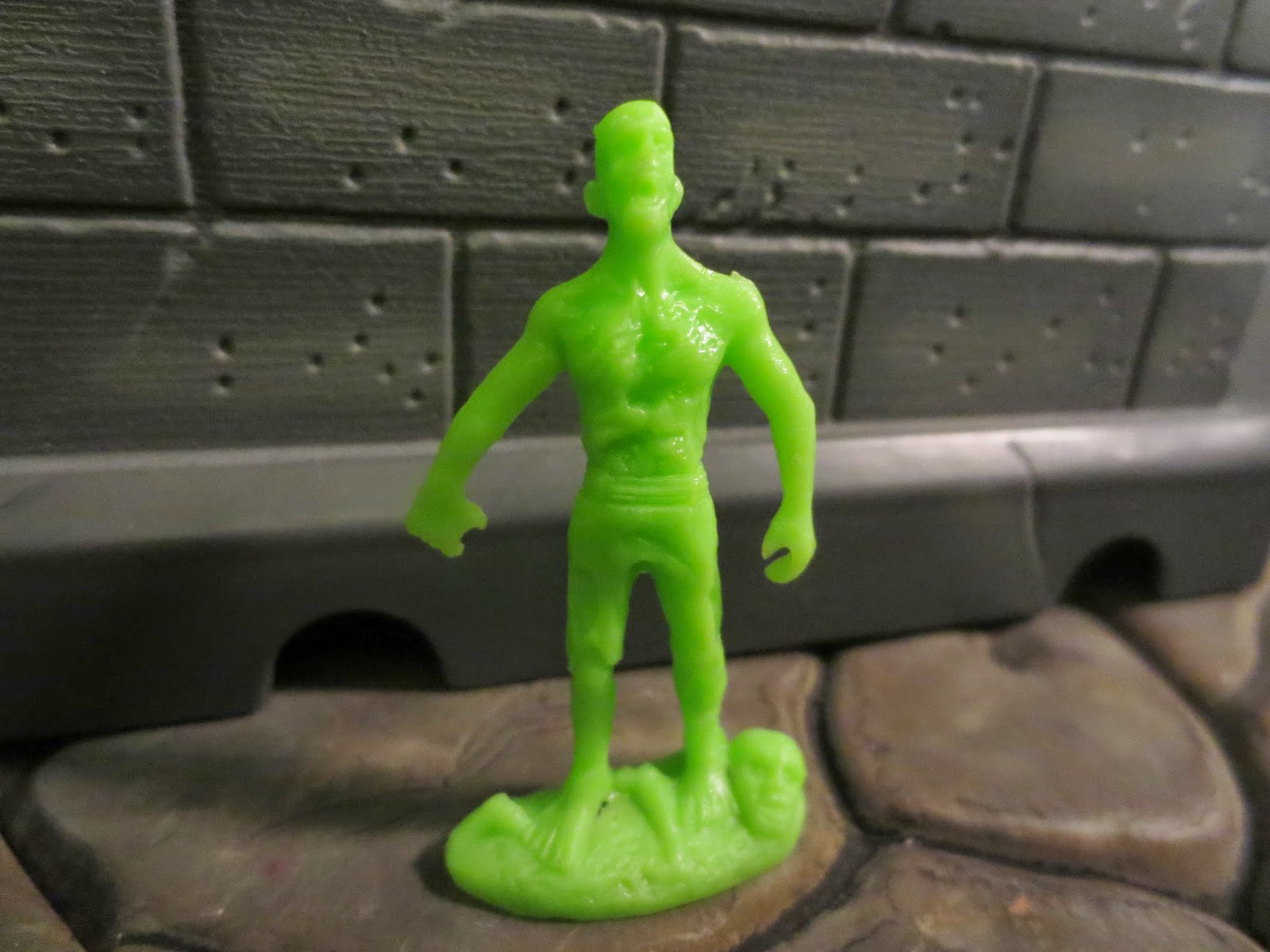 Marine Corpse: These former soldiers once fought for truth and justice; now they're fighting for brains! These zombies are slow but extremely tough and can absorb a ton of damage! Watch out for them hiding out in Cargo Trucks! 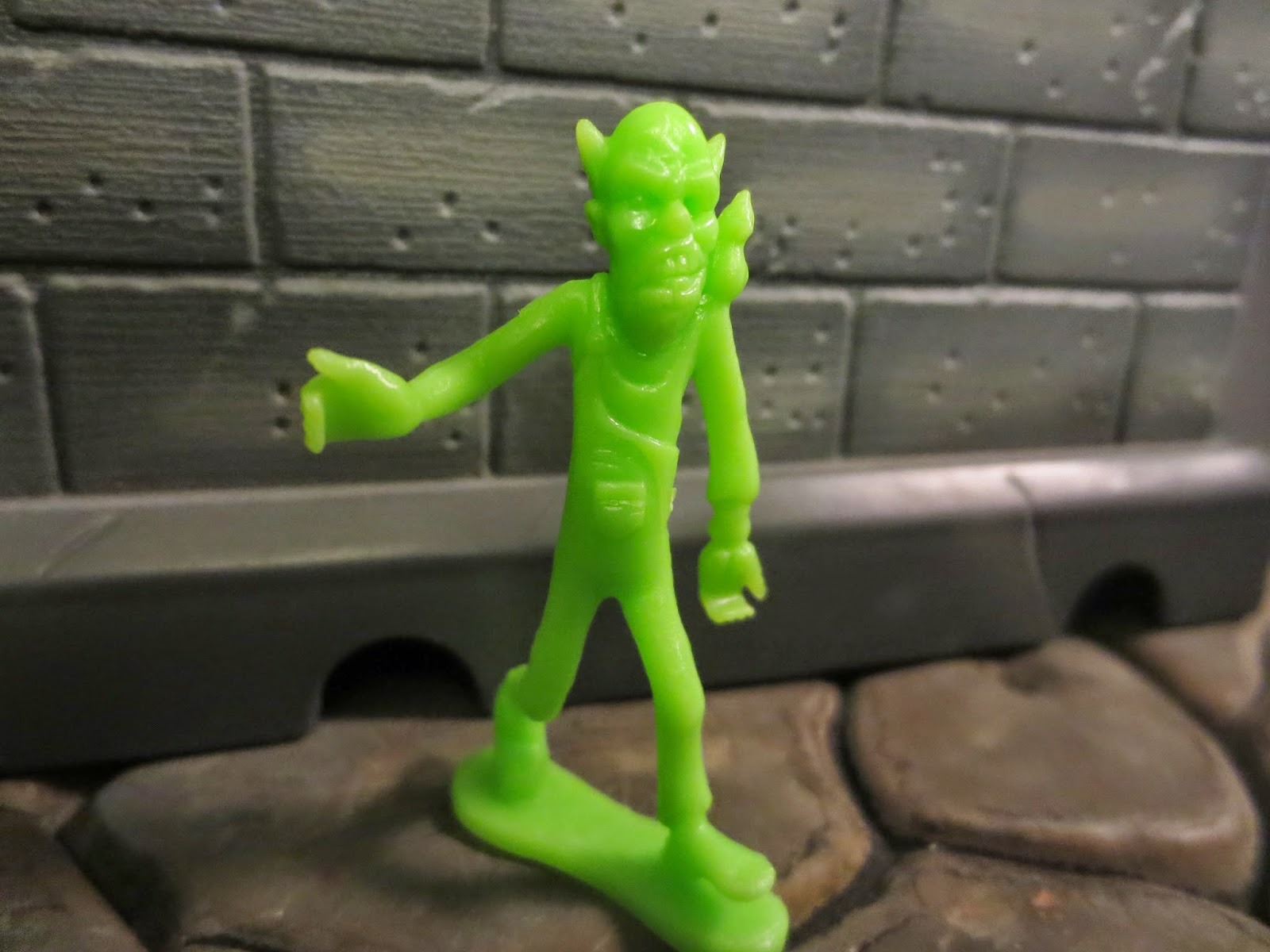 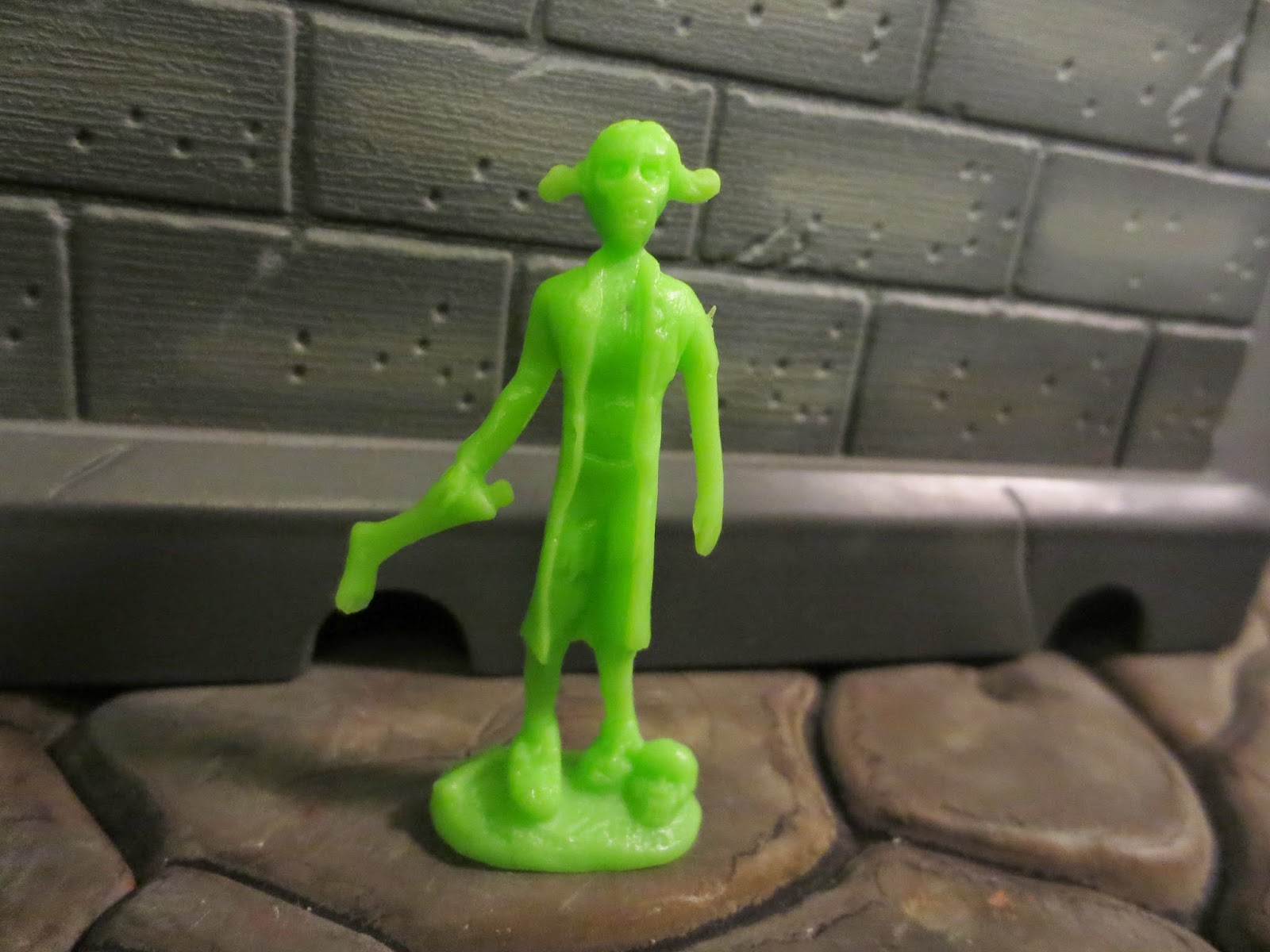 Re-Dead: Re-Dead is a zombie that has already been killed once! Rather than die, the weapon lodged in its brain has made it unpredictable. Re-Deads will walk slow most of the time but will erratically run in random directions. Put them down for good! 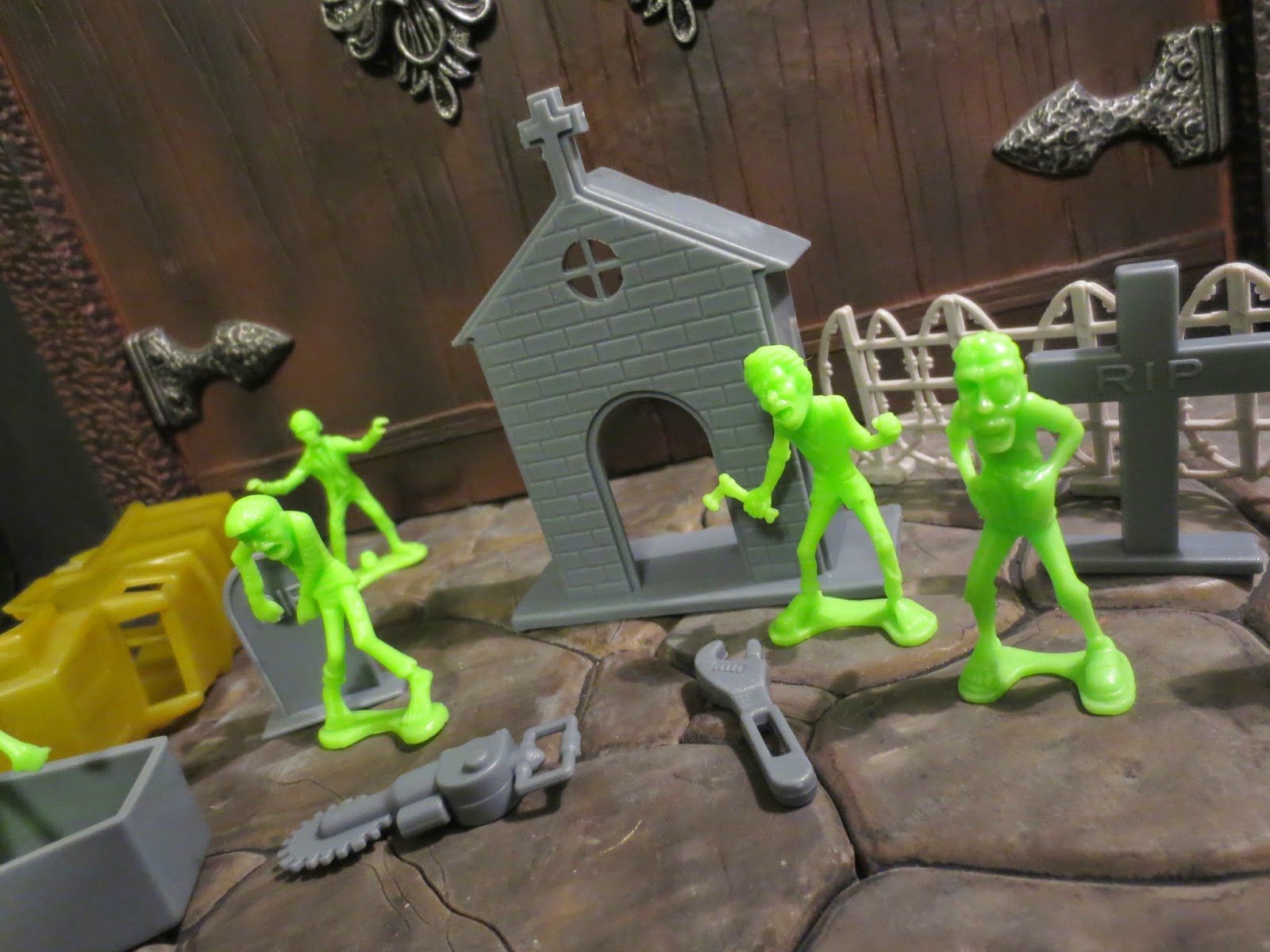 This is actually a pretty cool zombie set of figures. The cemetery pieces are pretty spectacular (I totally want to use the gravestones and mausoleum for D&D) and the little weapons are an interesting addition. The zombies range from fairly serious looking zombies to overly caricatured walkers. Still, it's a nice variety and you can't go wrong here for $6 bucks. I'm giving this set a Great due to all of the cool little extras and the 10 unique zombie sculpts.