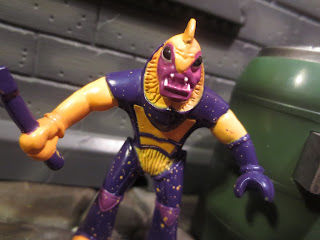 I'm always excited to add another Trash Bag Bunch figure to my collection and today I'm showing off Sewerot, one of the Trashors. These came out in 1991 and I actually owned a fair number of them as a kid. This is one I never had, though, so there's a really cool, special kind of nostalgia that comes with adding a figure like this to my childhood collection. Since the Trash Bag Bunch only had the thinnest of premises, I've kind of been writing some biographical elements for these guys. Looking at Sewerot, I'm thinking that these are army builder styled troops, commanded by the evil Trasher! Let's take a closer look at them after the break... 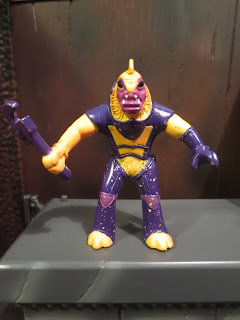 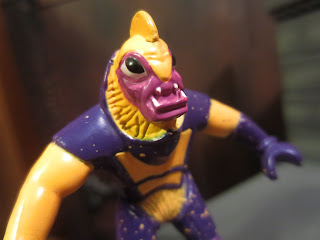 * I love the headsculpt of the Sewerot. Doesn't he kind of look like Abe Sapien from Hellboy? This guy came out about three years before Abe Sapien, so he's clearly not based on Abe Sapein, though; Was Mike Mignola a fan of the Trash Bag Bunch? Who knows? This is a great looking minifigure, though. 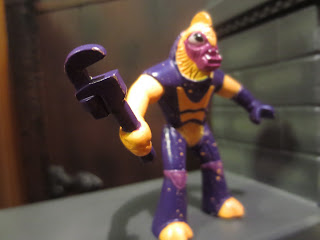 * The Sewerot is posed in a pretty normal, neutral pose, which actually works really well for an army builder. I also like that he's toting a pipewrench. That just seems like a nasty weapon, don't you think? 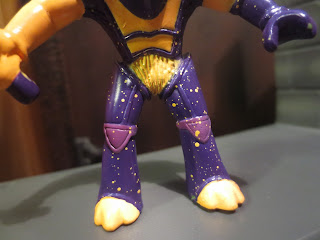 * I wasn't that big of a fan of the neon speckling on Dr. Sheen, but I'm loving the spray effect on Sewerot. I'm also loving the loud and proud purple and yellow color scheme. There are actually a few different shades of purple and yellow here, so that just adds to the fairly complex paintwork for a minifigure that's over 25 years old. 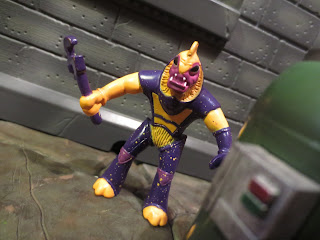 I like this guy way more than I thought I would. When I've always seen him on cardbacks or online pictures, I thought he seemed kind of boring. In person, though, he's pretty cool. A nice simple pose, impressive sculpt, and a really eye catching paintjob make Sewerot a Great minifigure. I now only need 6 of these guys to complete my set, which is one of my goals for 2017! Wish me luck! 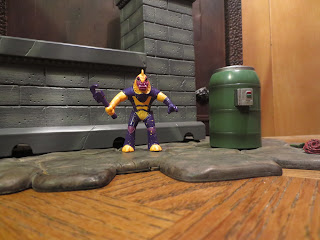 First: To the right is a picture my little one took all by herself. Not bad, right? Pretty good job for a 3 year old.