Collectible Review: Neutrino Wand from Ghostbusters by Mattel (with video! 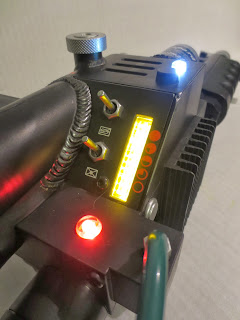 Ghostbusters and Raiders of the Lost Ark constantly battle for the title of my absolute favorite movie of all time. If you ask me one day of the week, I'll tell you that my favorite movie is Ghostbusters. Ask me the next day and I'll tell you I preferRaiders of the Lost Ark.  I have loved Ghostbusters ever since I saw it as a kid (even though parts of it terrified me). I've sat in a real Ecto-1 (it was signed by Bill Murray, Harold Ramis, Ernie Hudson, and Dan Aykroyd). I've watched the commentary track for the film (something I rarely do). I randomly insert Ghostbusters lines into regular conversation. I guess I have about every mark of Ghostbusters fandom there is except for being a prop expert. Yes, while I know all of the tools the guys use and some of the little nitty gritty details, there are entire websites where Ghostheads sit around and study, compare, and build Ghostbusters props. While I'd love to get to that point someday, that's not me. Today, as I'm reviewing Mattel's Ghostbusters Neutrino Wand from their Epic Creations line, I'm not able to give you specific measurements and comparisons. I will give you my opinions as a toy collector and a lifelong Ghostbusters fan. Deal? If that works for you, then join me after the break.... 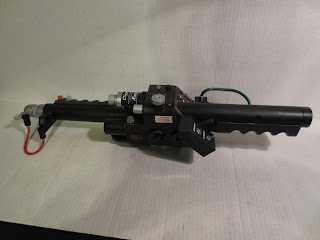 This isn't my first rodeo with one of Mattel's Ghostbusters prop replicas from their Epic Creations brand. I own the PKE Meter and reviewed the Ecto Goggles on the site earlier this year, so I had a good idea what to expect. The general idea here is to create fairly screen accurate collectible items. I don't think the term prop replica really works here as accuracy doesn't seem to be the primary concern. That's not to say that this collectible is inaccurate, but it's not exact nor does it use mixed materials to match the onscreen source material (it's mostly plastic). 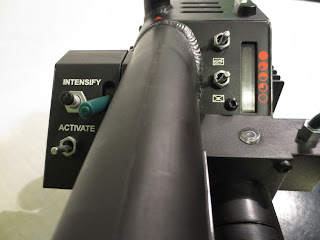 The Neutrino Wand here is based on the primary weapon the Ghostbusters use. It's normally depicted as being attached to their Proton Packs and is sometimes referred to as the Particle Thrower, Positron Collider, Proton Gun, Neutrona Wand, or Proton Blaster. I'm not sure where the term Neutrino Wand came from specifically, as I wasn't able to find any references to the term prior to Mattel announcing this release. I hope it's obvious, but I'll reiterate that the Proton Pack itself is not included. While there were some noncommittal statements made about releasing a Proton Pack at one point, I just don't think it's going to happen. The wand does have a metal bracket on it to attach it to a hypothetical Proton Pack release or a homemade Proton Pack, as well as a hole in the handle to attach a cord. The weapon is presented in a 1:1 scale, so you could use it for play, display, or cosplay. You could also use it if you were putting on a Ghostbusters stage play. Or if you wanted to do some live action Ghostbusters roleplay. There's a lot of play to be had here is what I guess I'm trying to say. 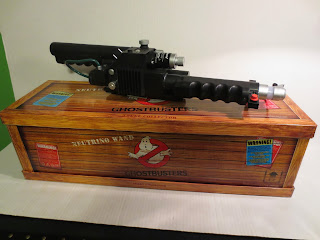 Rarely do I talk about packaging, but 1. This thing is pretty expensive and 2. It's got some really cool packaging. Inside the large white mailer box the wand is shipped in is the main package which resembles a wooden storage container. It's made out of cardboard, but it's a very sturdy, waxy cardboard that's quite colorful. The lid lifts off and the wand rests safely inside a plastic tray and is held in place by sturdy Styrofoam. I don't typically even keep boxes, but the box is so inspired that I'm definitely using it to store my wand. 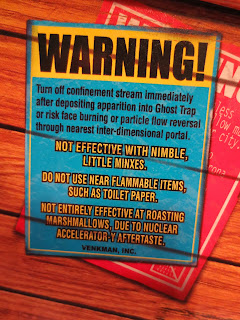 It's covered with warning labels that feature great Ghostbusters in-jokes such as, "Clear away all tables, tablecloths, dishes, and flower vases before use." and "Warning: Not Effective With Nimble Minxes." It's just fun and really does add a bit of value to the product. Inside is a small manual that walks you through how to use the product. 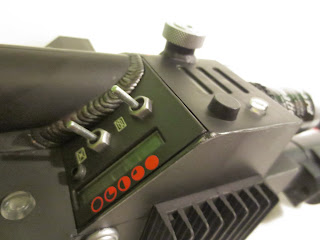 So, let's get to the Particle Thrower Neutrino Wand itself, shall we? It is a battery operated device and requires 3 AA batteries (sold separately, of course) in-order to work. The device features lights, sounds, and an extending barrel that flashes to simulate a proton stream. Here's how it works: First you flip on the power switch. This makes a power up noise and causes a red LED light by the handle to turn on. Second you flip on the "Proton Indicator" which turns on an orange LED near the barrel and a white LED on top of the unit. The "Proton Indicator" panel also lights up and shows you the strength of the proton stream. Third, flip the generator switch. This makes the distinctive charge up sound (and also whining cooling down sound when turned off) and causes the white LED to flash as well as the vent lights to ignite. Fourth, push the barrel extension level: the tip of the wand's barrel extends out a few inches and the weapon is now ready to fire! Hold down the "Intensify Button" and the wand vibrates and the tip flashes in a multitude of colors. You can even change the intensity and colors by turning a nob on top. While features like this definitely make the wand seem closer to a high end toy than an actual prop replica, it's still really cool and well done. Check out my Youtube video of this product in action here!  I can't deny the fact that I've walked around my house pretending to bust some ghosts with it. I also can't deny that the first thing I did was turn on the three switches while saying "Doe, Ray, Egon!" Make sure that you put fresh batteries in the Neutrino Wand before using it, though; I didn't initially and found the features to be greatly diminished. There's supposed to be a special feature that happens when you cross the streams with another model, but I don't own a second wand nor do I know anyone that has one, so I can't comment much on it. 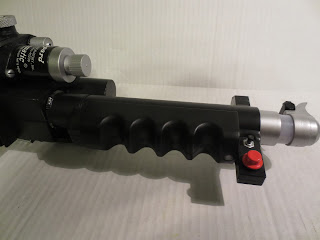 The wand is surprisingly lighter than I thought it would be. It doesn't feel inflatable or cheap or anything, but I expected a bit more heft to it. One thing that's interesting, particularly if you've never held a prop wand of any kind in your hands, is that it is a bit awkward in your hands. I initially wanted to hold it like a rifle or one of the vintage toys, but that doesn't quite work. Anyways, you'll get a feeling for it after awhile. The sculpt is pretty nice on the item with a fair amount of detail. There are lots of screws, bolts, and welded parts sculpted on. I kind of wish it actually used more real screws and bits. From a short distance, though, I'm not sure you'd be able to tell that some of the knobs and such aren't actually metal. You might even initially think that the main body is metal as it has a paint job that makes it look like parts of the painted black body are wearing away to expose the shiny metal underneath. 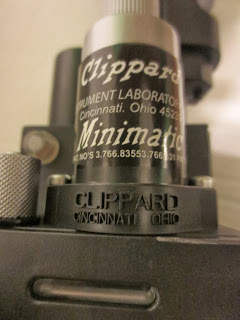 There's some nice fine detail work such as a schematic of some sort and a "Danger" warning on the left side of the wand, a minimatic cylinder from Clippard Instrument Laboratories in Cincinatti, Ohio (evidently a real supplier of parts- I found them online). The official name is the Clippard Modular Valve R-701 and you can still buy them to make your own Ghostbusters prop particle thrower. I mentioned it above, but the bottom of the wand does have a metal bracket that looks like it has been designed so that you can store it on a Proton Pack. Who knows if Mattel will ever release one, so perhaps fans will have to find a way to implement this into their homemade Proton Packs. 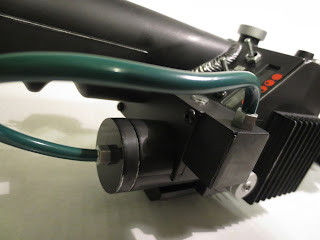 I don't talk about the price of toys and collectible items often since they can vary quite a bit and change pretty frequently, but since Mattel is only offering this through theirMattycollector.com website, I feel justified in mentioning the asking price of $130 clams. I have to say that I think that seems a bit expensive for what is essentially a plastic toy gun with lights and sounds. If you called this a prop replica to someone who actually collected prop replicas, I think they'd probably laugh at you. You know what, though? I love this thing. Love it, love it, love it. Ghostbusters was one of the first things I really remember loving as a kid. Heck, I think being a Ghostbuster was the first career I ever verbalized that I wanted to pursue. I vividly remember my parents buying me the Kenner GhostZapper, a toy gun that functioned like a projector with little film reels depicting various Ghostbuster ghosts and specters. While I loved the gun, I was so terrified by the Gozer and Skull faces on the film reels that I made my parents cut those frames out. Yes, I had the GhostZapper, the Proton Pack set with the yellow foam stream, the Slime Blower, and plenty of other weapons, but this is the toy I guess I always really wanted. It's a bit expensive, but at the same time it's a toy that you wish you could somehow send to your younger self as it's everything you hoped and dreamed for as a kid. 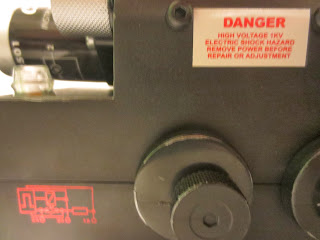 So, how does it really stack up? The size seems right and it feels sturdy. Not as heavy as I'd like, but it doesn't feel cheaply made or overly fragile. I don't think you'd want to drop it, though, but regular use shouldn't give you any difficulties. The sculpt is nice. It's a bit soft in places, but from about two or three feet, you might not realize you're looking at a toy. That's thanks in part to the excellent paint work. I really like the lights and sounds. The PKE Meter and Ghost Trap both were great in this category while the Ecto Goggles were a pretty big miss. Overall,  I'm giving this a Great. It's not as nice as it could be, but it's still pretty cool. It's definitely a fun item to pull out to show off to guests and I do plan on trying to implement it into a Ghostbusters costume for either Charlotte Heroes Con next year or for Halloween. I will say that while browsing a number of Ghostbusters fan sites, I am completely in awe of the Proton Packs and wands that fans have created. Some are simple while others are very, very complex and nearly identical to their on screen counterparts. I don't think that this is a substitute for the work of those devoted and industrious Ghostheads in any way, but for fans like myself who don't trust themselves to build or weld something, this is a great alternative. 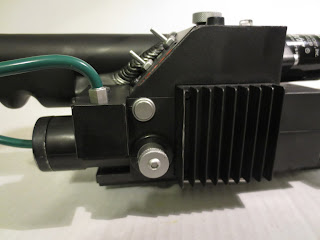