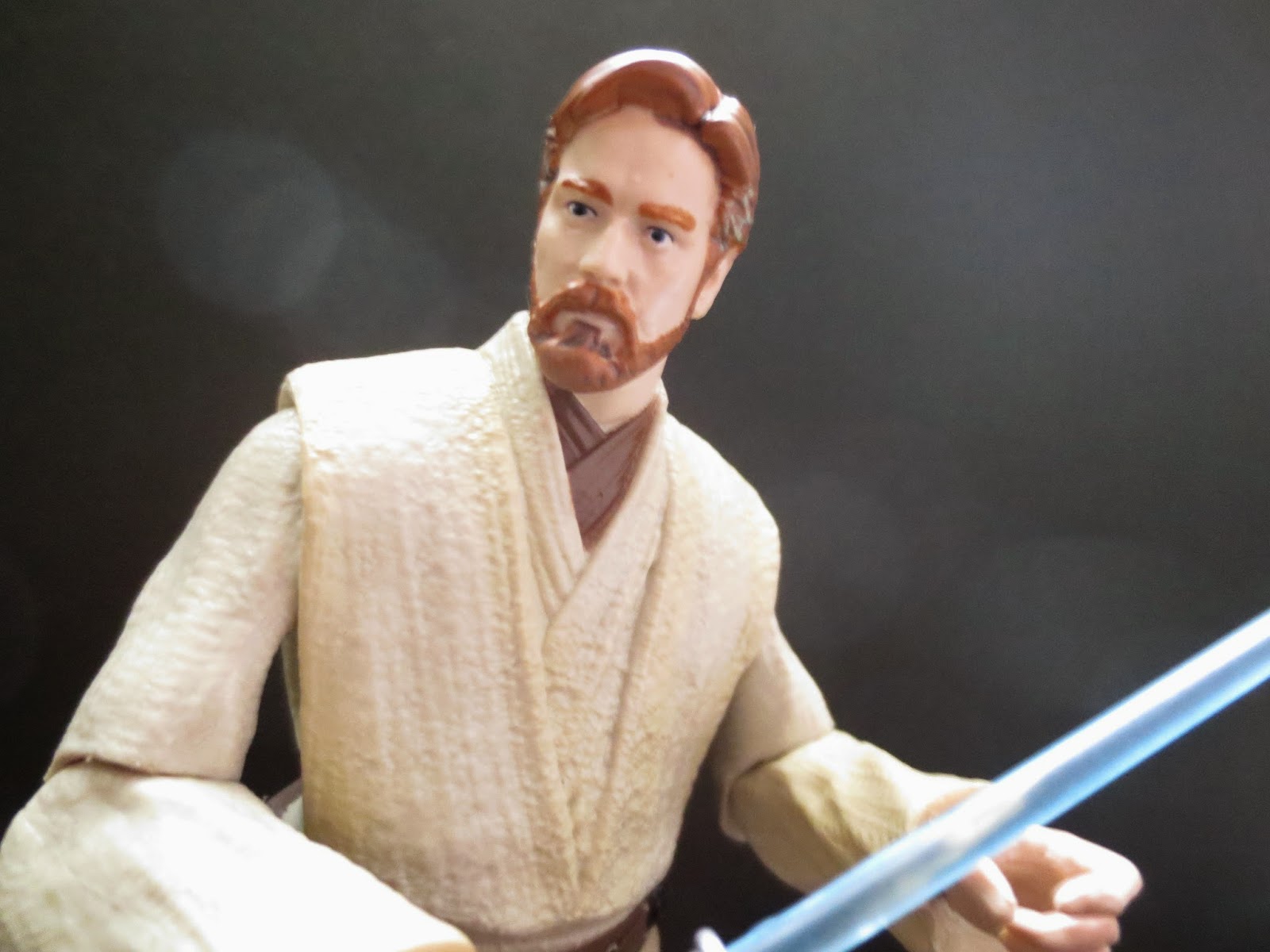 Ewan McGregor as Obi-Wan Kenobi was quite possibly the best casting in the Star Wars prequels. In The Phantom Menace he was excellent as a young Jedi padawan on the verge of becoming a Jedi Knight. Say what you want about Attack of the Clones, but by that film McGregor really put his stamp on the role while still capturing the playfulness, patience, and secretiveness that Sir Alec Guinness used to make Obi-Wan such an intriguing, mysterious character. By Revenge of the Sith I felt that Gregor was somehow actually channeling the late Guinness; I imagine that kids in future generations watching the films chronologically might not realize that Obi-Wan was actually played by two different actors! All of that being said, I think that this Revenge of the Sith version of Obi-Wan Kenobi's inclusion in Star Wars Black is completely justified. While I've seen some collectors try to argue that Star Wars Black should only be characters from the original films, I like the mixture of prequel and original trilogy characters. Since reviewing Star Wars Black series 2 back in October and November, however, my thoughts on the line have changed a bit due to Hasbro's weird new case packs and the definite lack of accessories included with most releases. I'll try to touch on these during the review, though. Ready for a look at Ob-Wan Kenobi, the renowned Jedi Knight from the planet Stewjon? Then join me after the break... 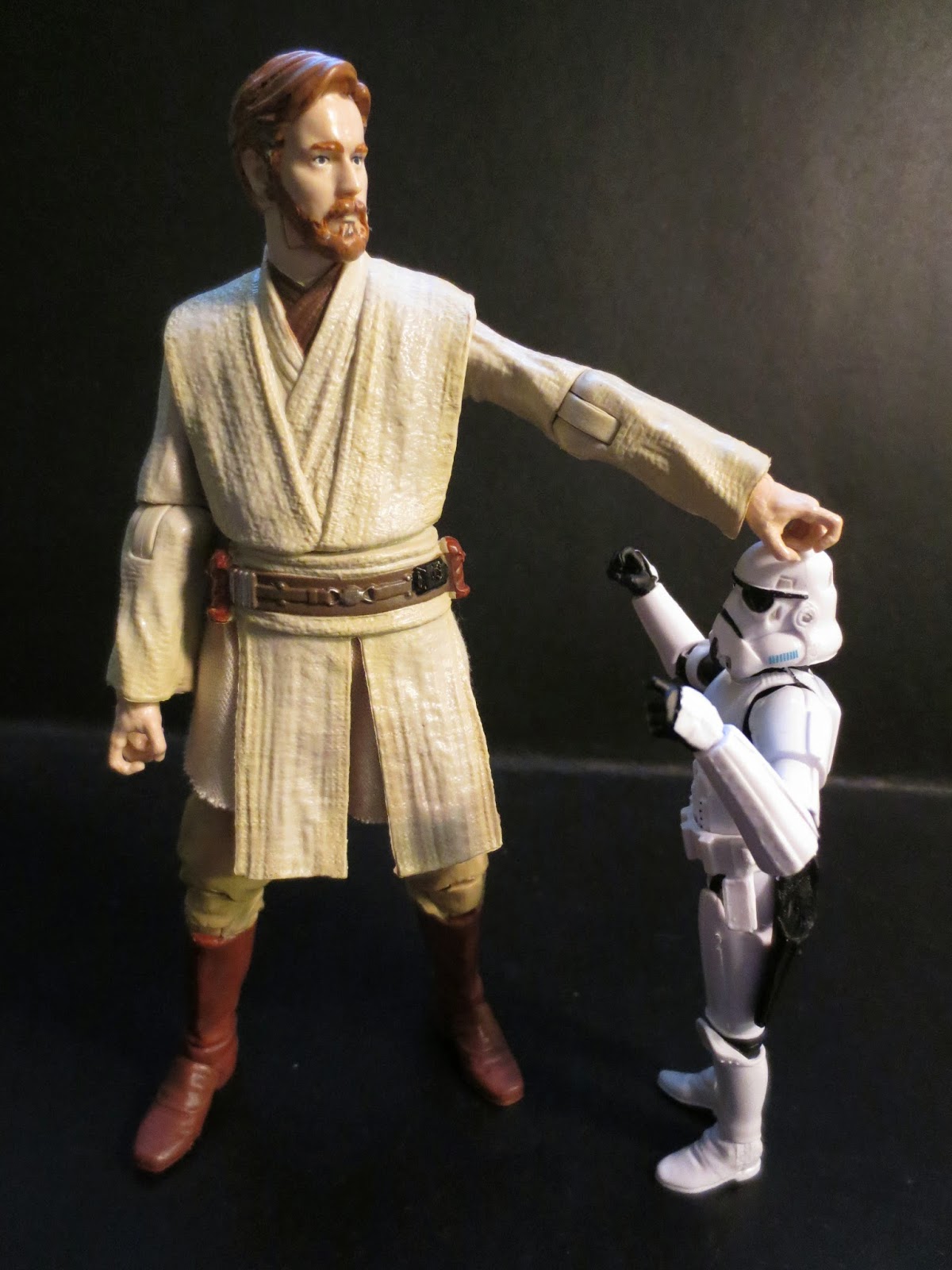 Ewan McGregor stands right around 5'10", so since this line is in a 6 inch scale the figure's height of just a hair under 6 inches makes sense considering Obi-Wan is wearing boots and has some fairly thick hair. Like most of the other Star Wars Black figures (well, at least the humans) Obi-Wan doesn't look photo realistic like a NECA figure. The style really is like a larger version of the traditional 1/18th scale figures. Hasbro has been pretty consistent with this style, so it works. 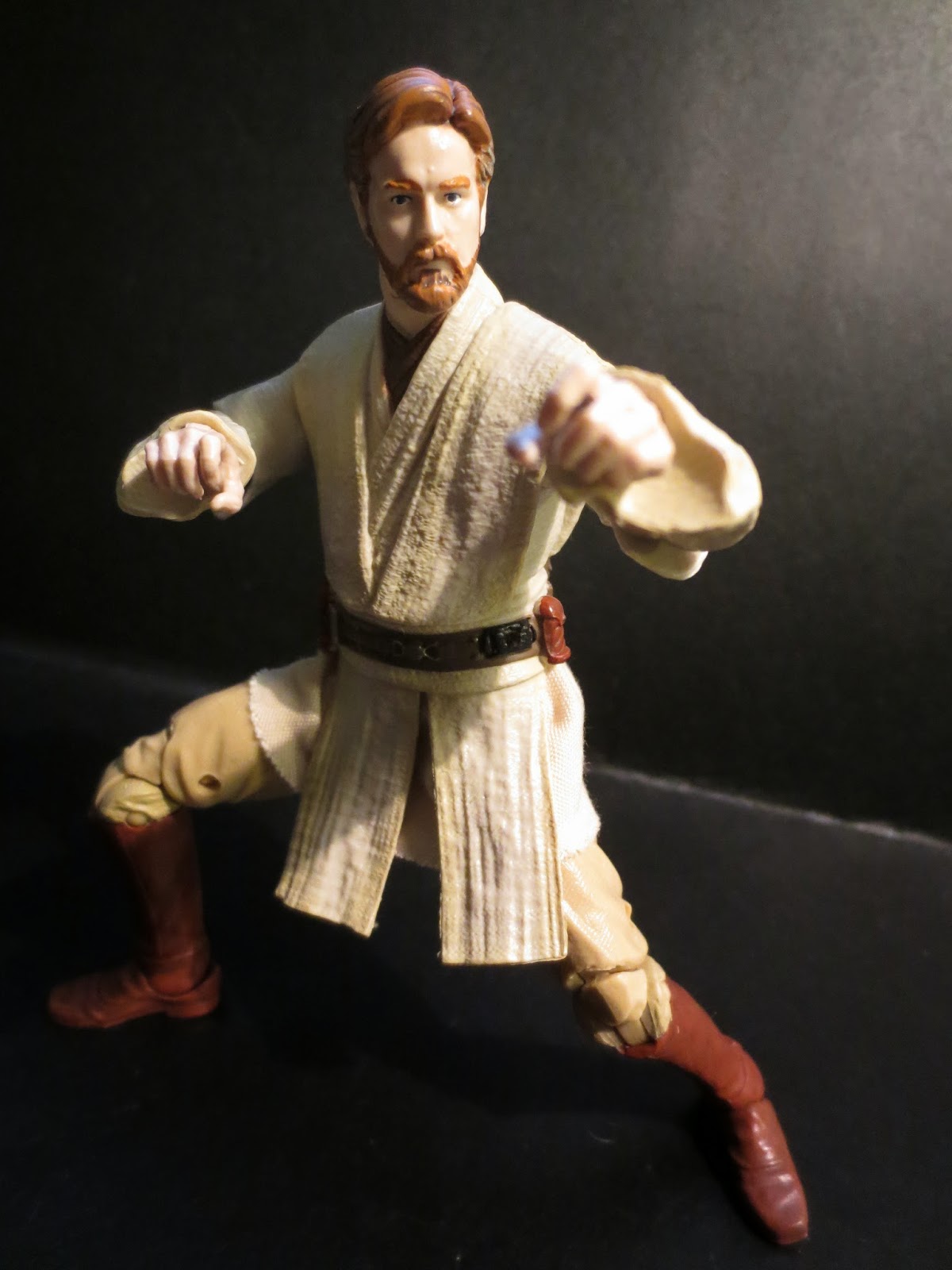 Since the majority of the Star Wars Black figures are completely new sculpts, the articulation tends to vary a bit from figure to figure. Obi-Wan features the following points of articulation: swivel/hinge ankles, double hinged knees, swivel hips, ball jointed hips, a ball jointed abdomen, swivel/hinge shoulders, swivel/hinge elbows, swivel/hinge wrists, a hinged neck, and a ball jointed head. I didn't have any quality control issues as every joint feels nice and sturdy. What I do have problems with is the limited arm articulation. There is no way you're going to get many two handed lightsaber poses, something I feel is pretty important for a Jedi figure. The balljoint on the head is pretty tight as well, which allows for pretty limited movement. The legs work great and have a nice range of movement, though. The use of cloth for parts of the bottom of Obi-Wan's tunic helps to keep things pretty fluid for his lower body movement. 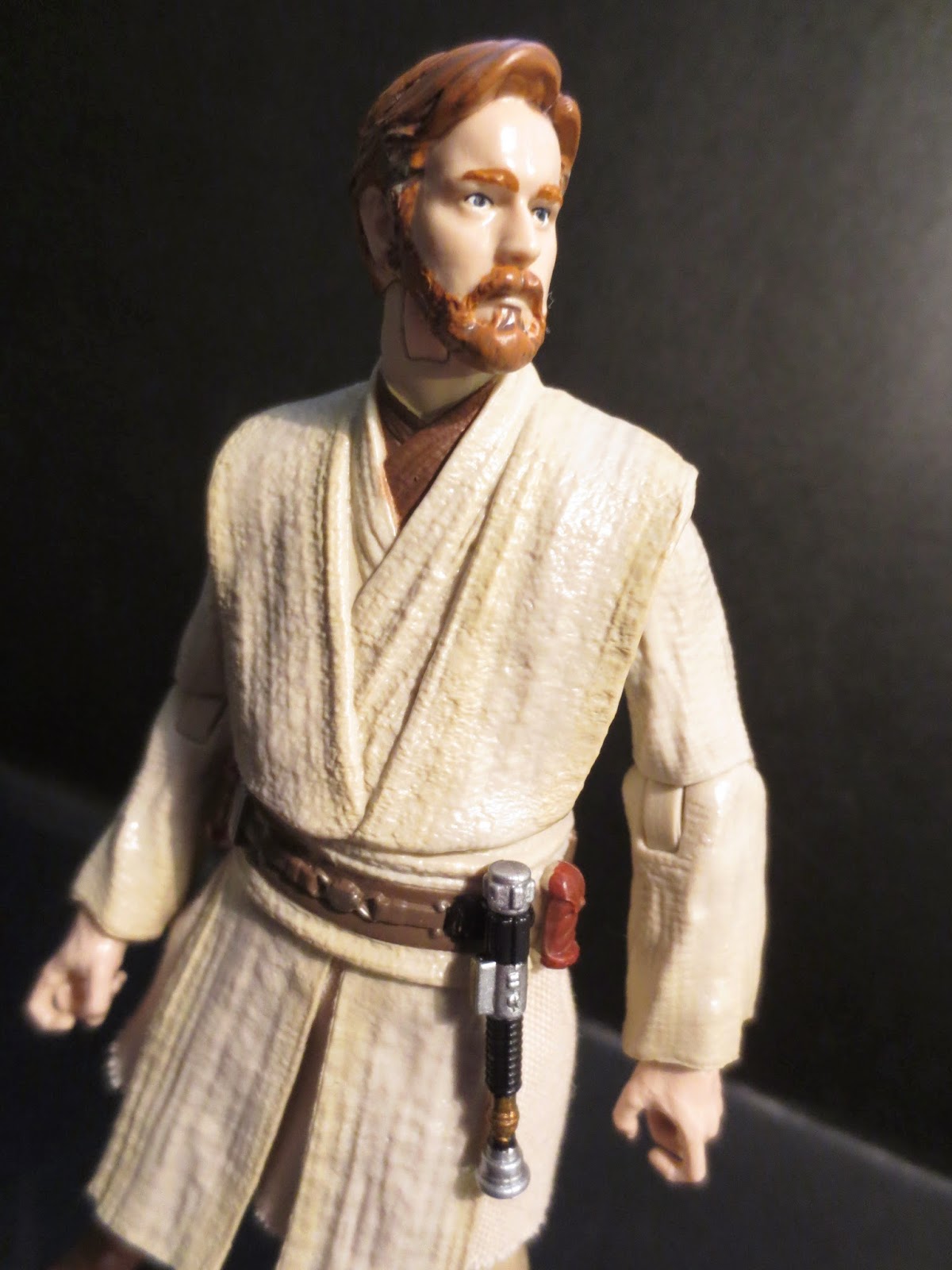 Where to start in talking about the sculpt? I guess I'm going to throw all the Sabacc cards on the table and simply say that I find this figure to be pretty uneven. Everything from the waist down looks good while the arms, torso, and head are quite a bit weaker. Let's start with those weak points and then move on to better things. First, I'm not crazy about the headsculpt. It's not terrible but it just seems so lifeless and generic. I don't think it's as bad as Slave Leia, but it's close. It's kind of that weird thing where it looks like Obi-Wan Kenobi, but it doesn't look like Ewan McGregor as Obi-Wan Kenobi. It also seems a bit undersized. The arms are also kind of odd as they're sculpted in such a way as to make the sleeves look billowy and flowing, but they end up looking disproportionate to the main tunic. The tunic does a nice job of hiding the mid-torso joint, but it sticks out and makes Obi-Wan look like he has a bit of a gut. The belt looks great, though, with lots of cool little details and pouches on it. I mentioned it in the articulation, but to preserve both the hip articulation and the flowing nature of the bottom of the tunic, there is a fabric piece used. Mixed together with two rubbery pieces this actually looks pretty good. There's nothing wrong with the legs: the pants have a unique texture and the boots look pretty solid. 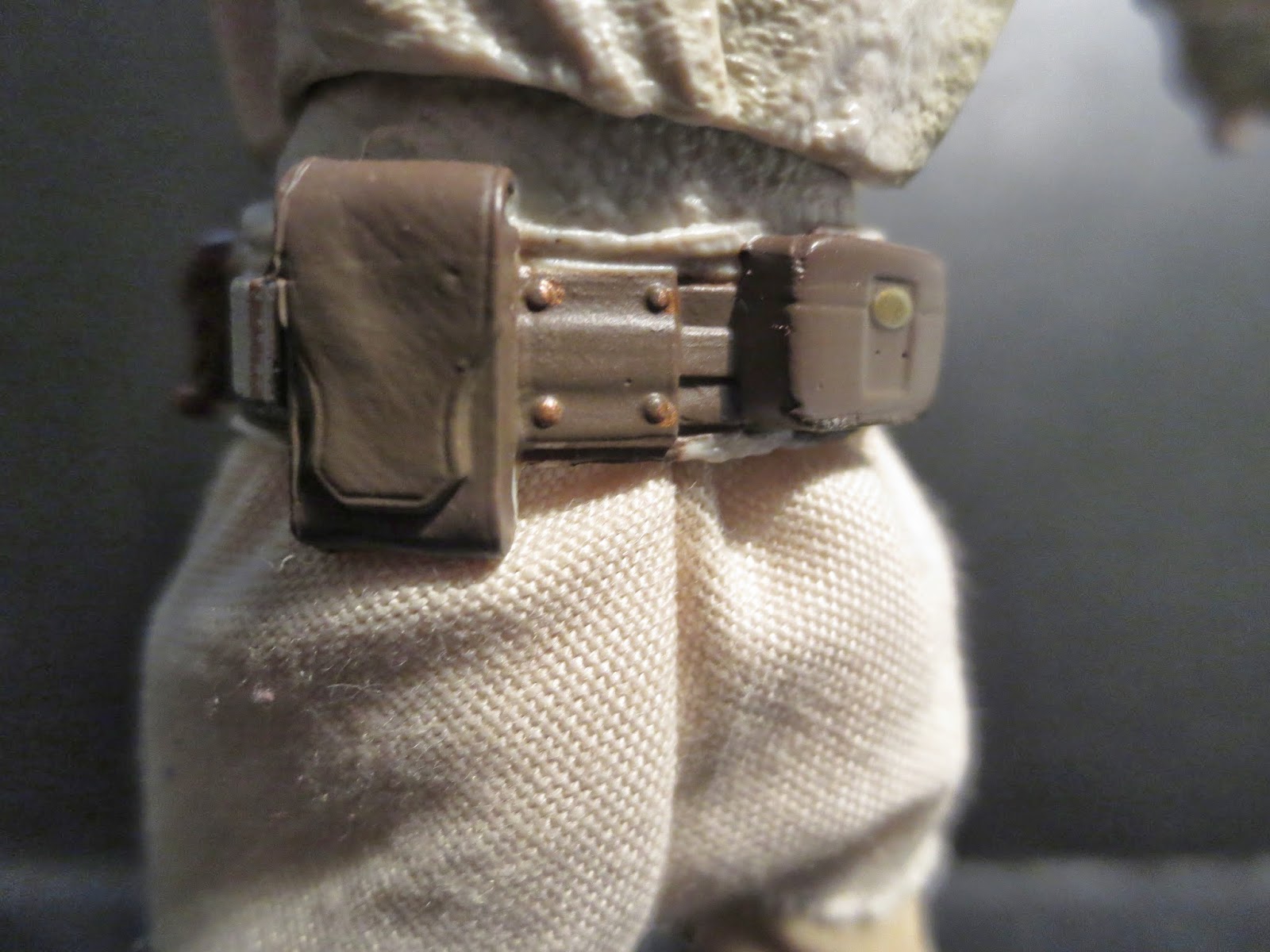 There's nothing wrong with the paintwork. It's not groundbreaking but it accurately matches Obi-Wan's outfit from Revenge of the Sith. Like many Jedi outfits we get lots of tans and browns. I particularly like the way that Hasbro used a darker paint over brown to give Obi-Wan's boots a leatherlike appearance. His hair and beard is pretty neat and I do like the attempt to add some age to the character by inserting a mixture of grayish highlights to his temples and a wash to his hair and beard. The smaller, technical details always seem to be where these figures shine, as is apparent by Obi-Wan's belt. All of the little pouches and capsules are painted and really bring the figure some much needed detail. 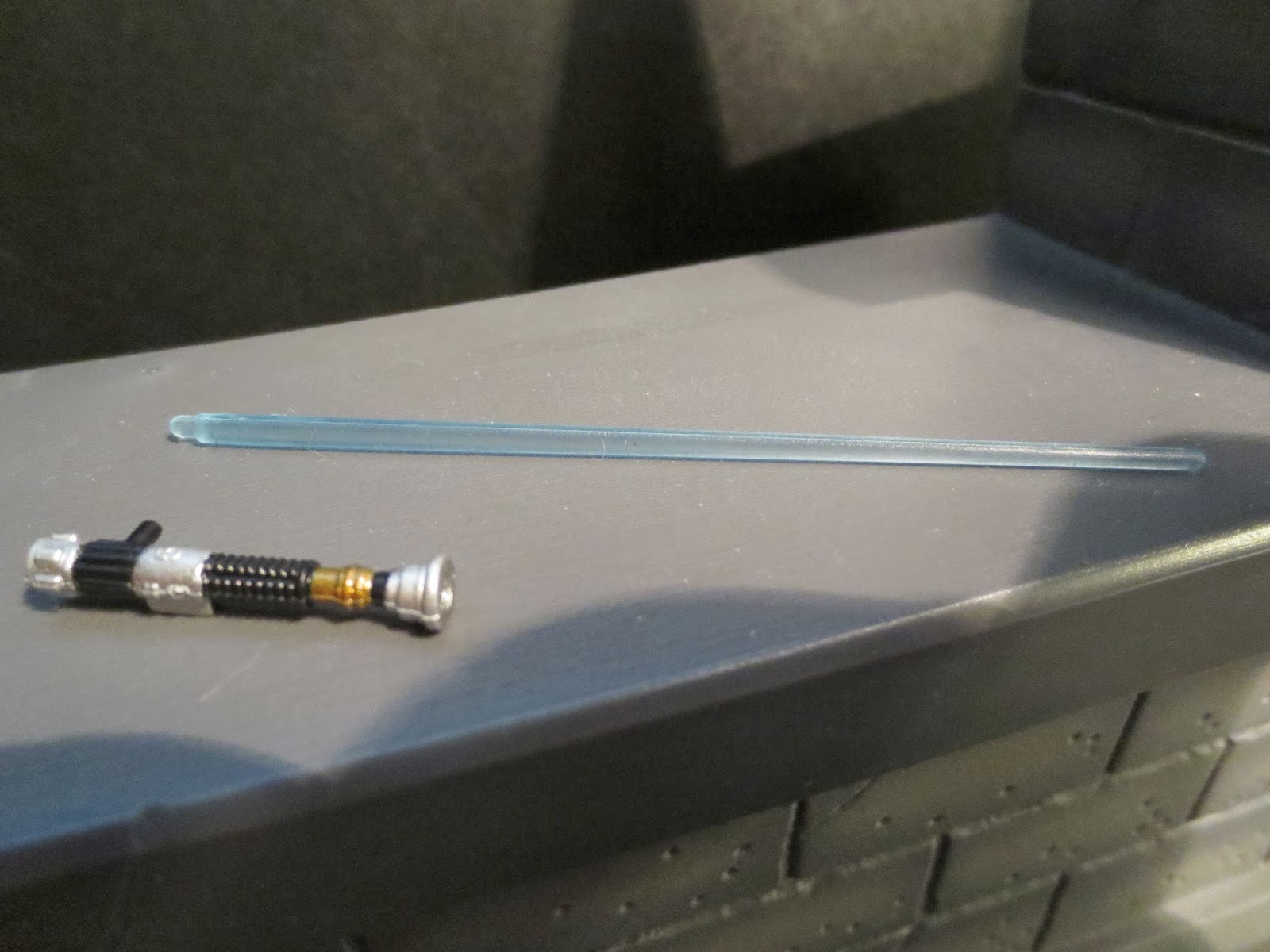 Here is where I'm actually most disappointed by this figure: he only comes with his lightsaber. When we first started hearing about Star Wars Black and seeing pictures of these figures, they seemed to be definitive versions of each character. Darth Maul is pretty much the definitive Darth Maul from Episode 1. He comes with his lightsaber (that splits in two), his binoculars, and his cloak with an additional portrait. The same pretty much goes for every figure released so far; they come with nearly everything they need. Obi-Wan is woefully under equipped and I think the biggest mistake Hasbro made was not giving him a cloak. I'd be OK with a cloth cloak, but a rubber cloak (like Maul's) with an attached alternate portrait seems like a mandatory accessory for this character. This figure just feels incomplete without it. I like the lightsaber (the blade is removable and the hilt plugs into Obi-Wan's belt) but it just isn't enough. 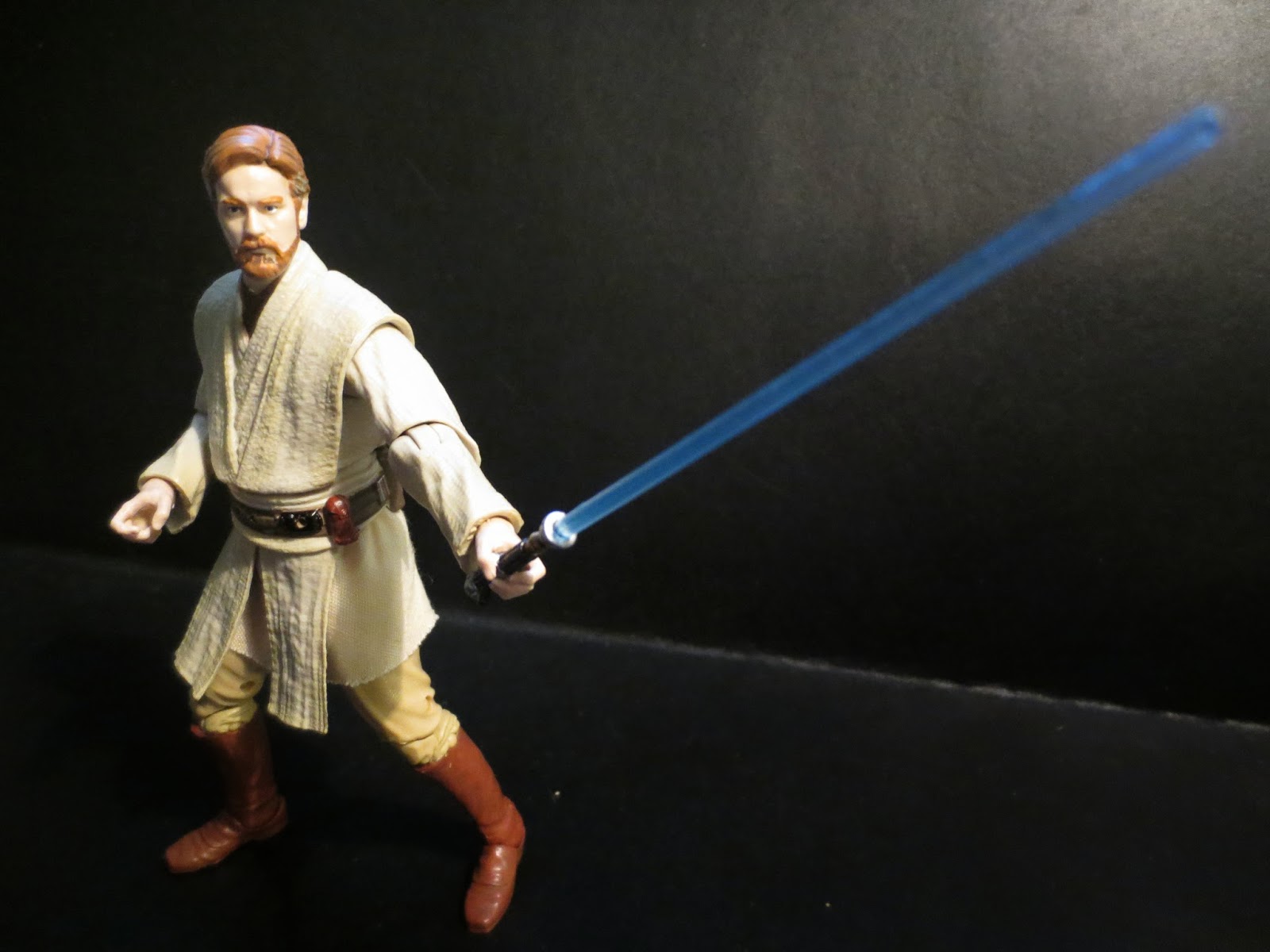 I find Obi-Wan to be a disappointing figure. He's a great character and was a figure full of potential, but I can't help but feel like Hasbro is really cutting corners on these guys. If that's how Hasbro is going to manage this line going forward, I think I might just get out of being a completist on this line now. I mean, Obi-Wan without his cloak? It looks like the series four Anakin figure will have the same problem. I still like the solid feel of these figures and overall I like the paintwork and presentation here, but the sculpt is a bit weak and the lack of accessories just kills this guy for me. Overall, I'm giving Obi-Wan here an Eh and a 1/2. There's nothing about this guy that just screams to me that he's a necessary purchase or that he compares with the figures we received not more than 6 months ago. And that's a darn shame. 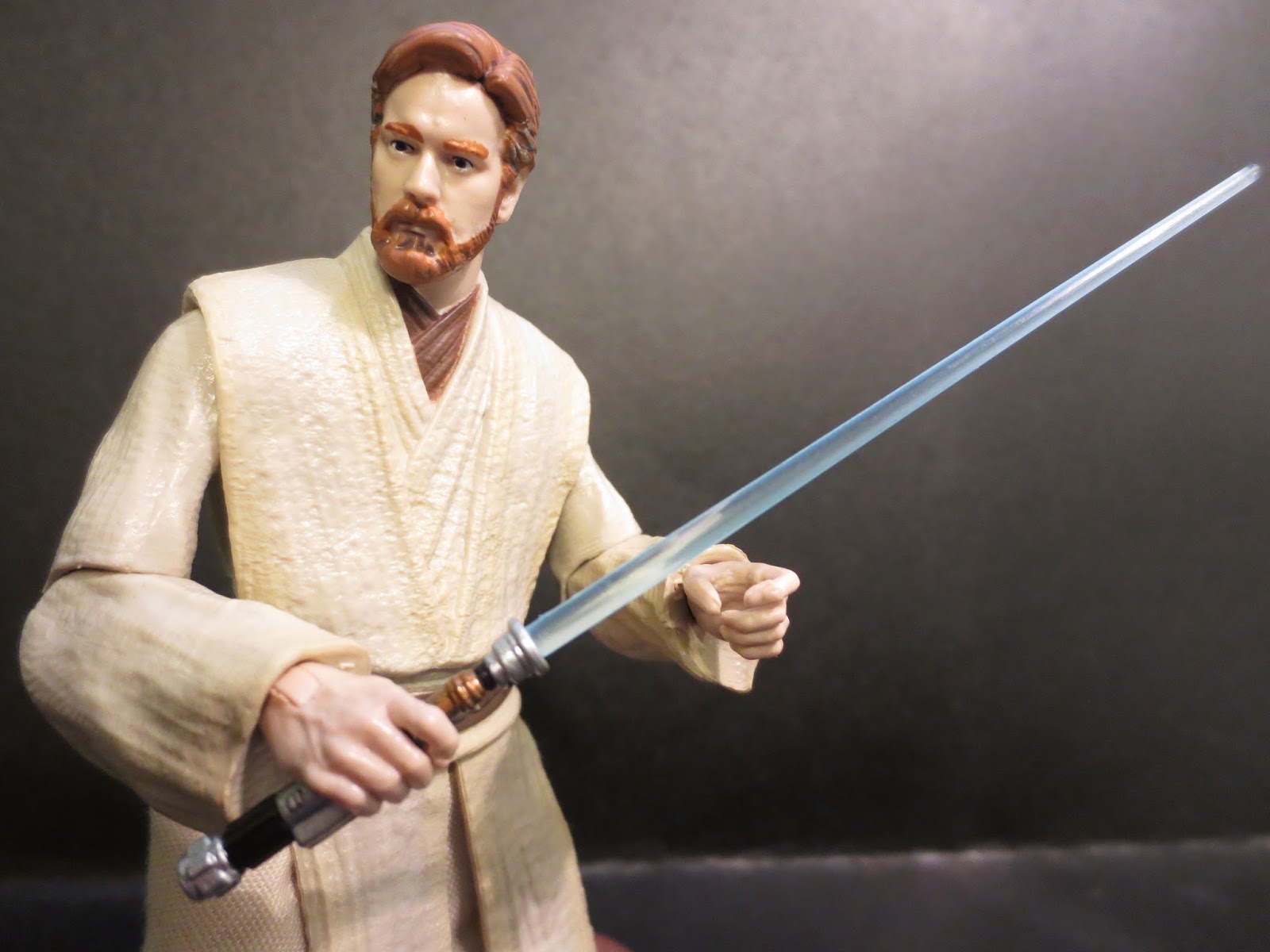