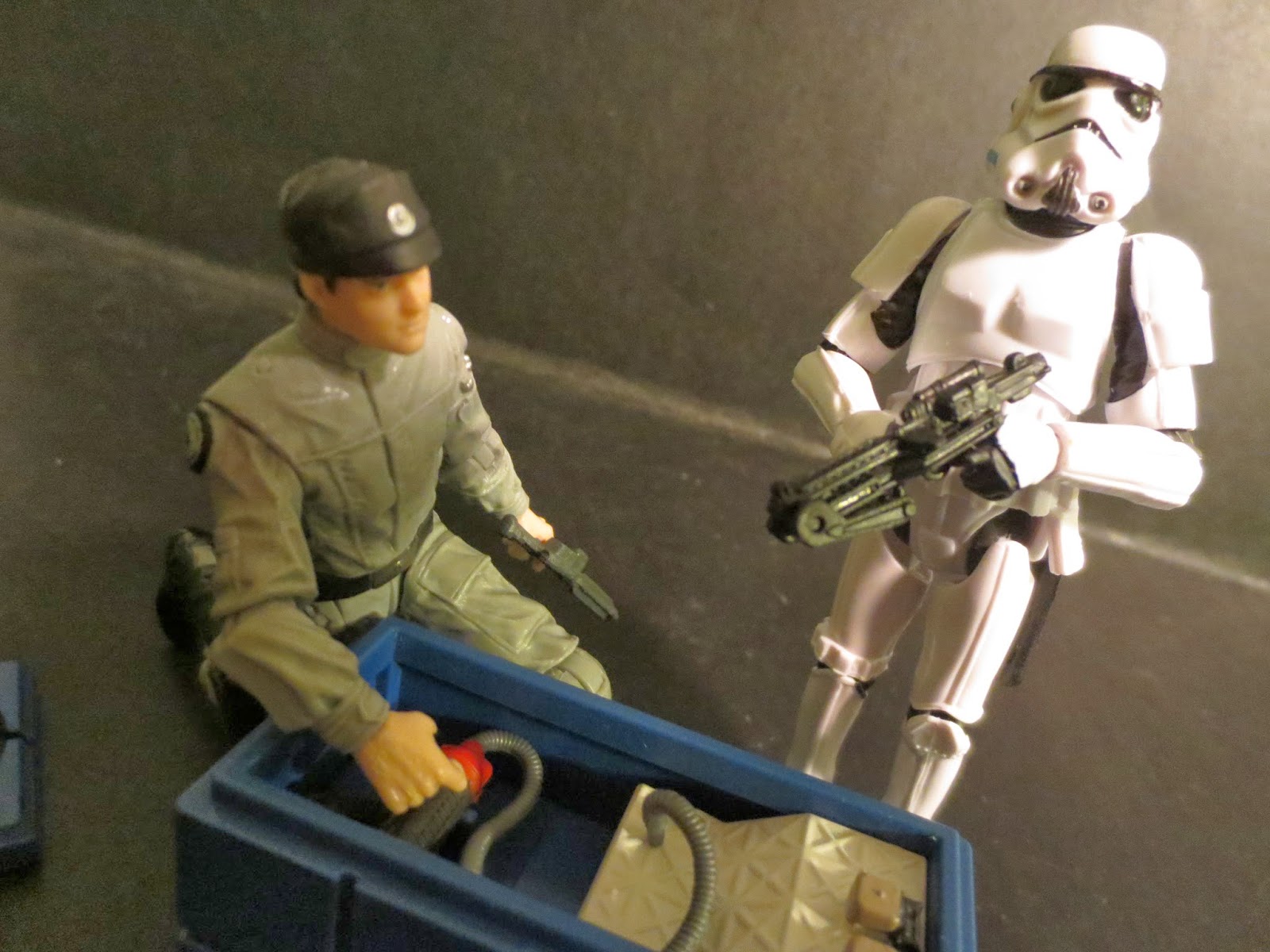 I absolutely loved the Star Wars Vintage Collection figures that Hasbro released a few years ago. They were a perfect combination of awesome, well accessorized Star Wars figures in very nostalgic, vintage styled packaging. While that line sort of just disappeared (with later releases harder to find than Bigfoot), K-Mart has continued to offer some excellent Vintage Collection exclusives. Around Christmas I found both of the exclusives I was looking for: the Death Star Scanning Crew and the Imperial Scanning Crew. While both sets are designed to complement one another, today I'm specifically looking at the Imperial Scanning Crew. Based on the scene in Episode IV: A New Hope where the Millennium Falcon gets captured by the Death Star's tractor beam and the Empire sends a scanning crew into the ship to search for Han Solo and company, the Imperial Scanning Crew offers one of the two Imperial Technicians and one of the Stormtrooper's that stands guard outside of the ship, Stormtrooper TK-421. While I was excited to get this set because of the scanning crew (it's been one of those sets that has been floating around for a long time without a scheduled release), it was the fact that this set actually came with a Stormtrooper named TK-421 that send me into complete nerd nirvana. That is just such a cool detail! Ready to take a look at these two loyal Imperial troopers? Then join me after the break... 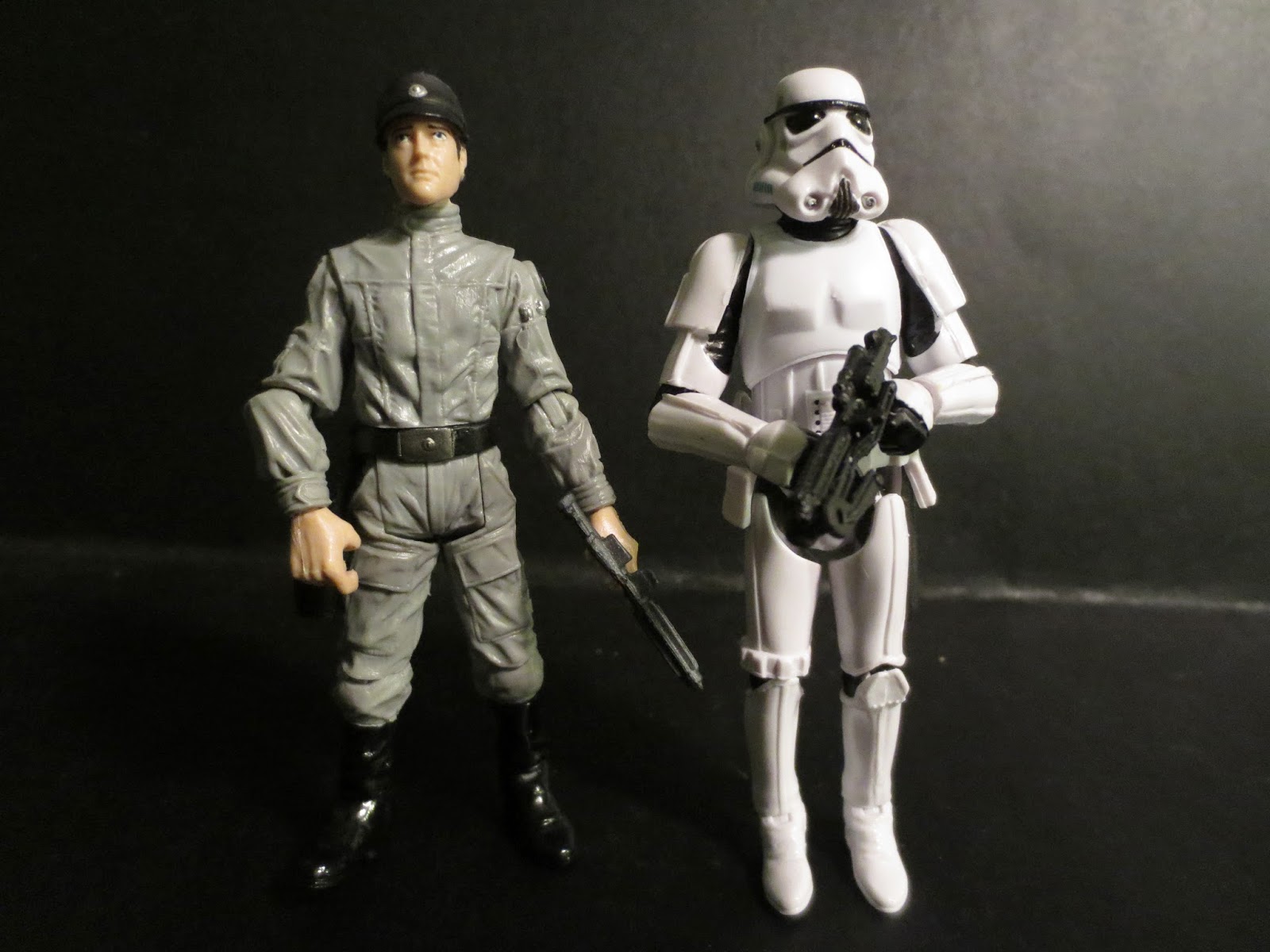 Unlike some of the mid-90's and early 2000's Star Wars figures, these guys really are 3 3/4 inches tall. The Imperial Technician is right on the money while TK-421 is a little taller (more like 3 7/8ths). Neither of these guys are completely new figures and instead are based on older figures. The Imperial Technician is based on the Imperial Scanning Crew figure from 2009's The Legacy Collection while TK-421 is based on the body from the Shadow Stormtrooper from 2006's The Saga Collection. Both of these guys come in a very cool vintage inspired box. It isn't a window box, however, as both figures and the top half of the scanning box are floating around in the box in plastic bags. 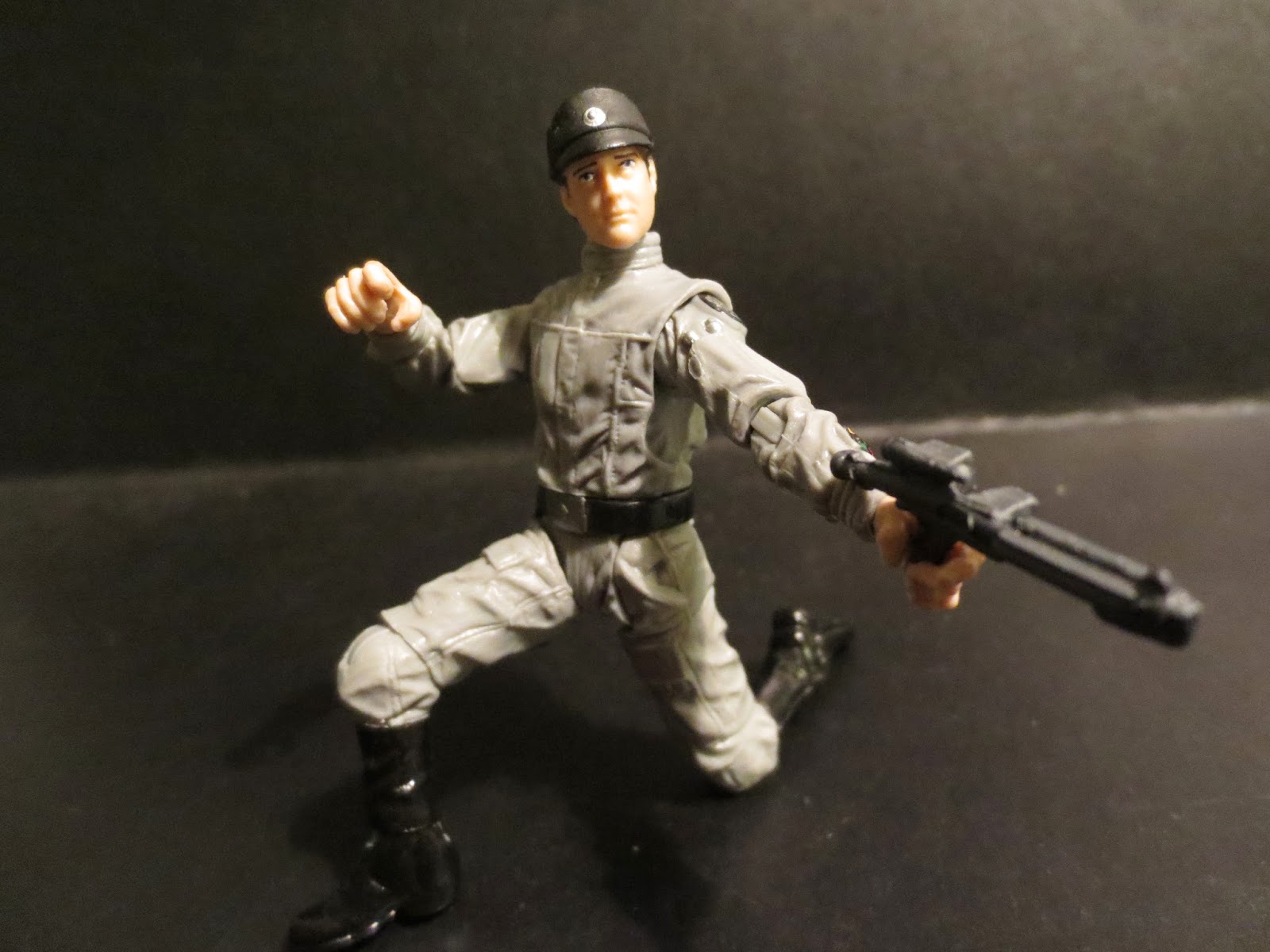 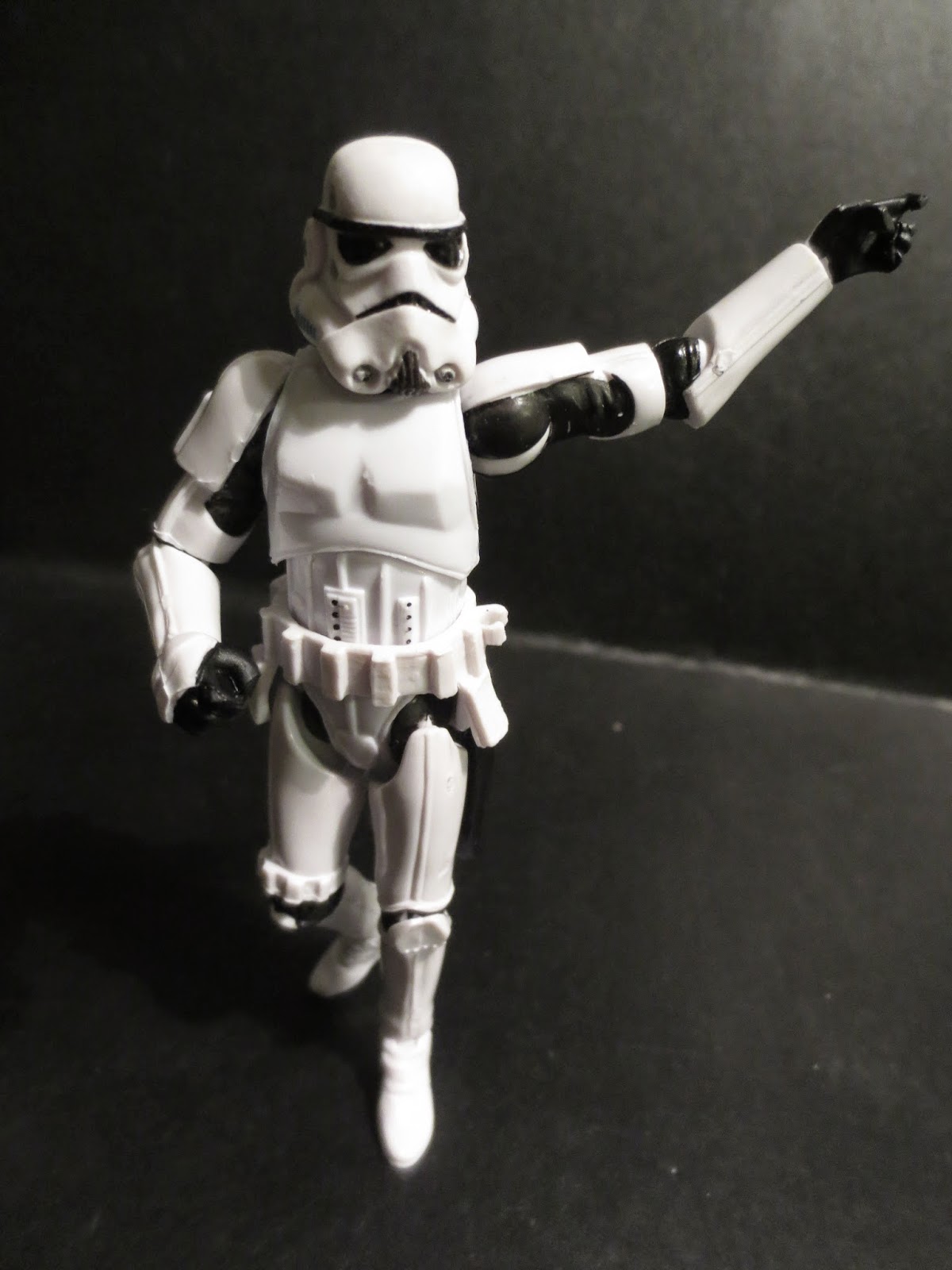 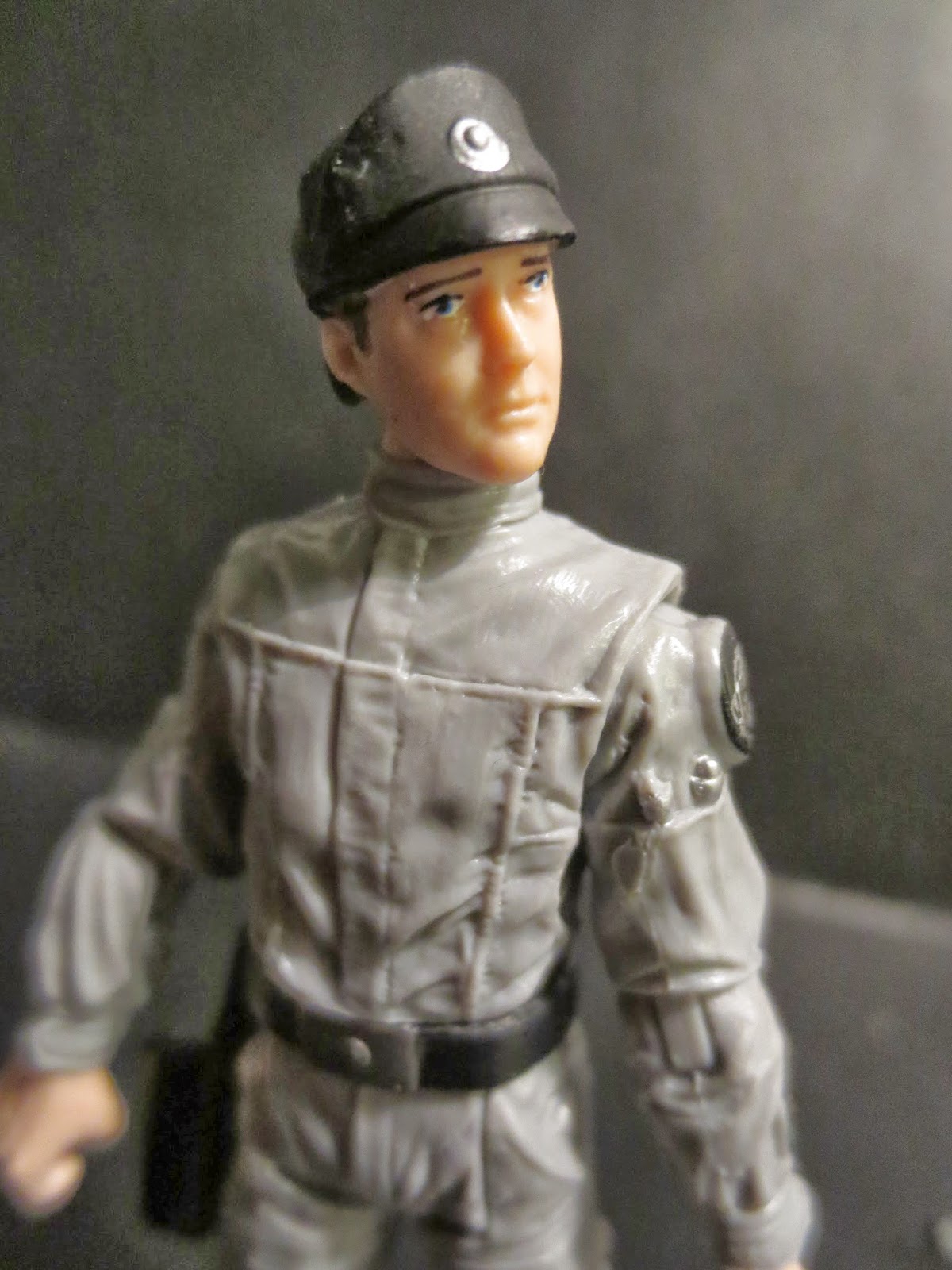 The Imperial Technician has a pretty simple costume, but that doesn't mean that Hasbro didn't bring their A-game when sculpting it. His gray jumpsuit looks fantastic (some people suggest the film outfits were repurposed old racing suits). It's covered with pockets and seams and has some wonderfully realistic wrinkles and creases in it. Sometimes you don't see sculpting this impressive in figures twice this size. There are even tools in his left shoulder pocket and a minute little com-link on his left wrist. The head sculpt looks a fair bit like one of the two technicians from the film and wears the distinctive black Imperial cap. The only detail that seems to be not screen accurate is that this guy has a holster on his right hip. Of course, it's tough to tell if he is or isn't wearing one on screen but honestly, this is a detail I'll definitely overlook. I like my toys armed. 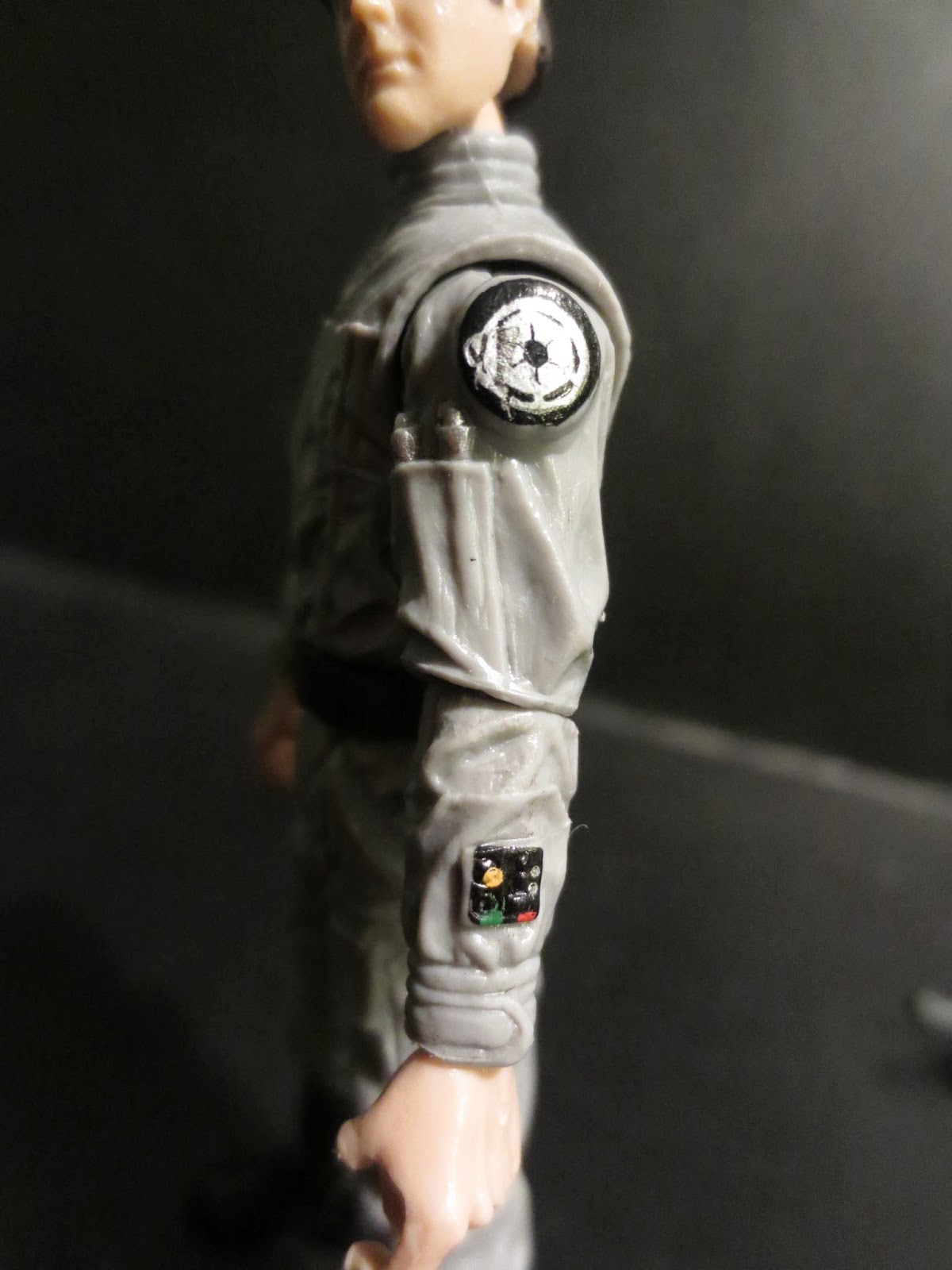 The paint is OK overall, but there are a few problems that I'll mention. First, the hinge on his ankles is not painted or molded in black like his boots, but is instead the same gray as his outfit. This is one of those minor things that just doesn't look good. The second flaw is the Imperial insignia on the shoulders. These look to be really nicely detailed, but the paint seems to be very smudged on both sides (although the left is worse than the right). Still, there are some nice elements such as the silver paint applications on his miniature tools and the work on the communicator. It's incredibly tiny but looks very screen accurate with five different colors on a square that's only about 1/4 of a millimeter wide. 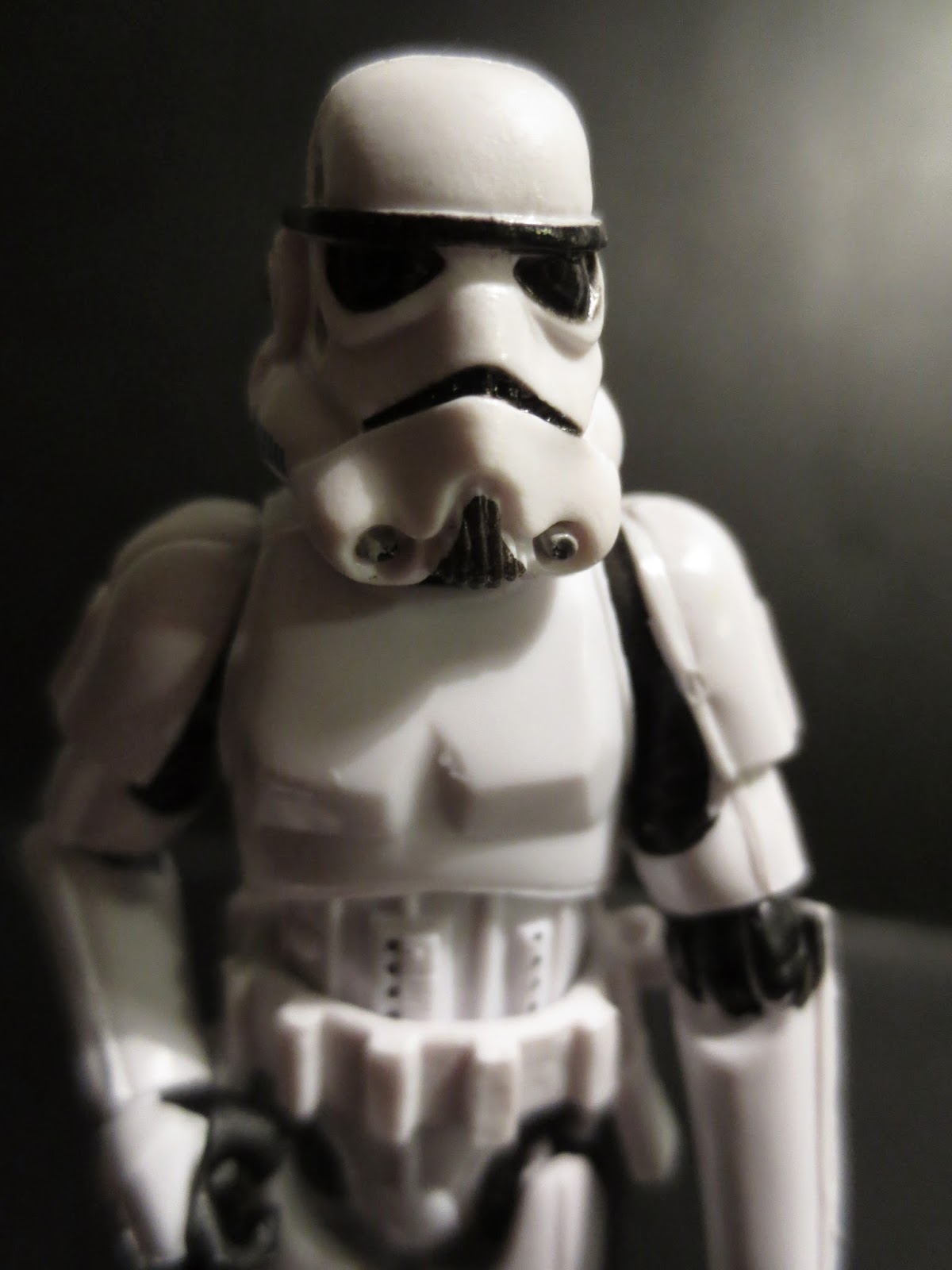 I'm not going to go through every detail of TK-421's armor but it seems to be pretty accurate for an older mold. The shape of the helmet might be off a bit but it isn't a deal-breaker or anything. The detail on the armor plates and the visible bodysuit underneath looks fantastic, but it's really the new utility belt that's the draw here. The grappling hook unit is visible on the rear right and the holster is hanging on the rear left hip. There's also a tiny clip. What's that for? TK-421 here comes with a removable C-1 personal comlink. That is an incredibly cool accessory and I'll cover it a bit more when I get down to accessories. 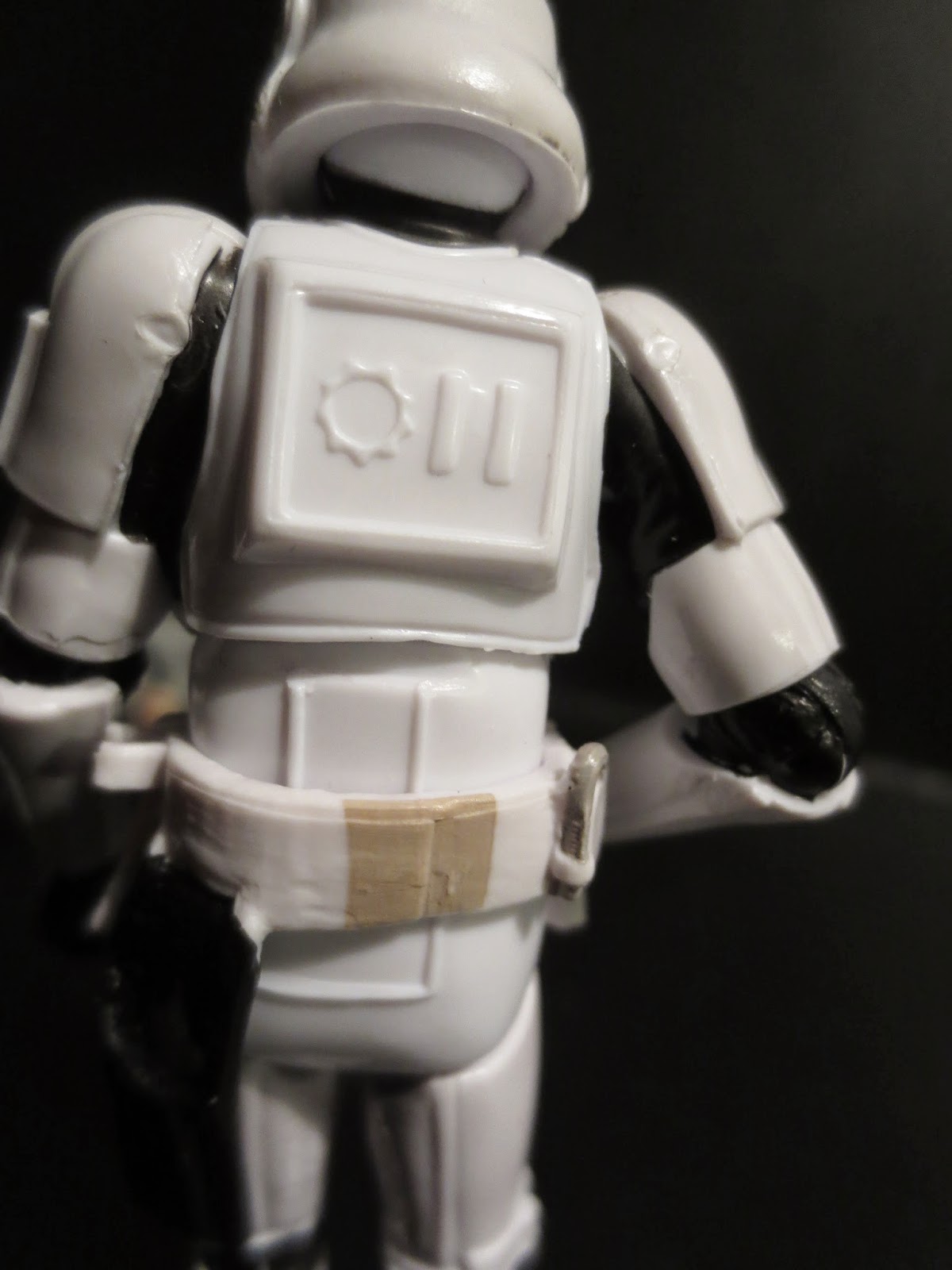 The paint looks good with decent separation between the black padding and the white armor, although I must point out that there are some inexplicable black smudges on various parts of the armor. There are also some paint issues in the hinges where the black paint seems to easily flake away, exposing the white plastic underneath. 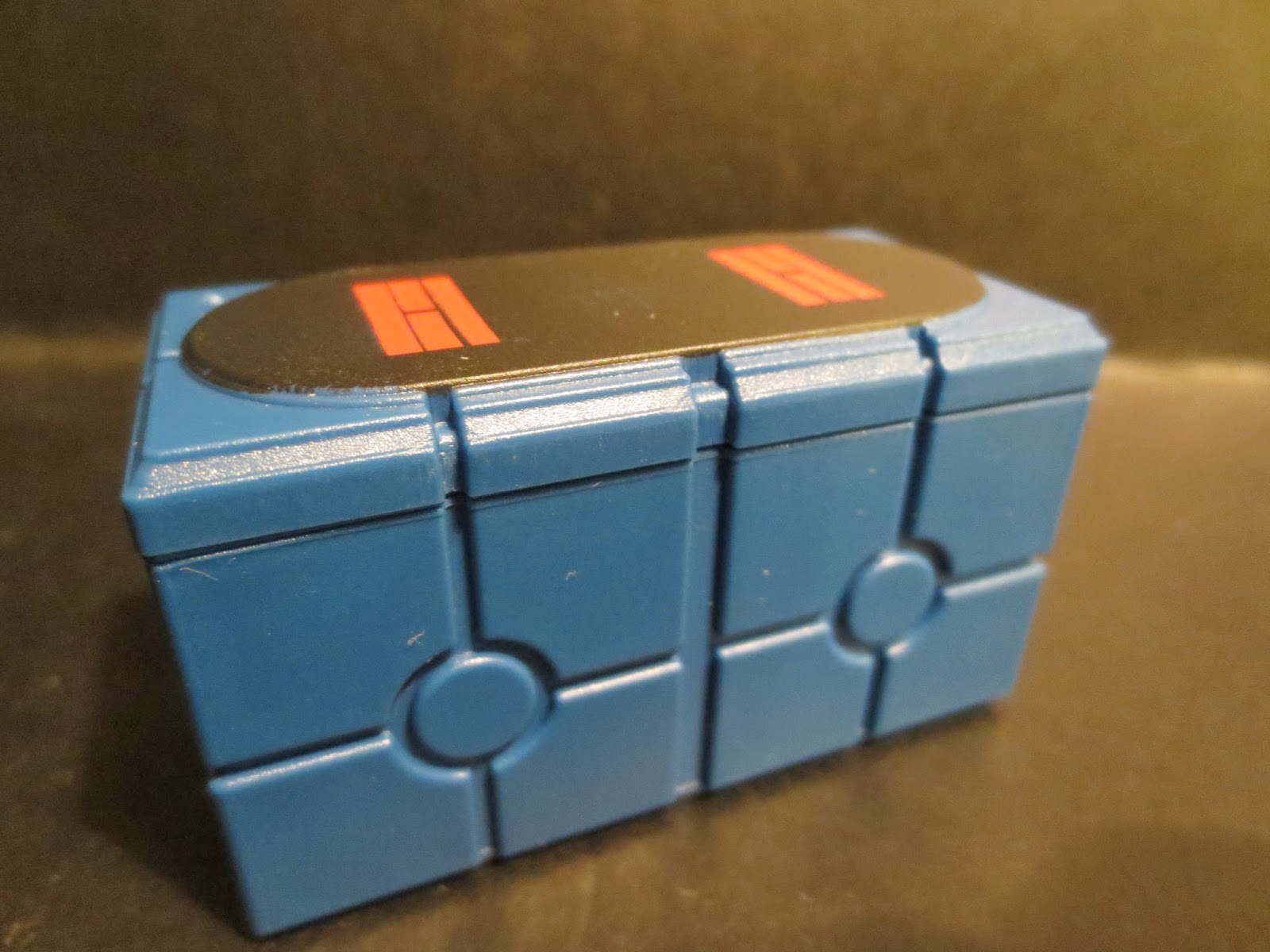 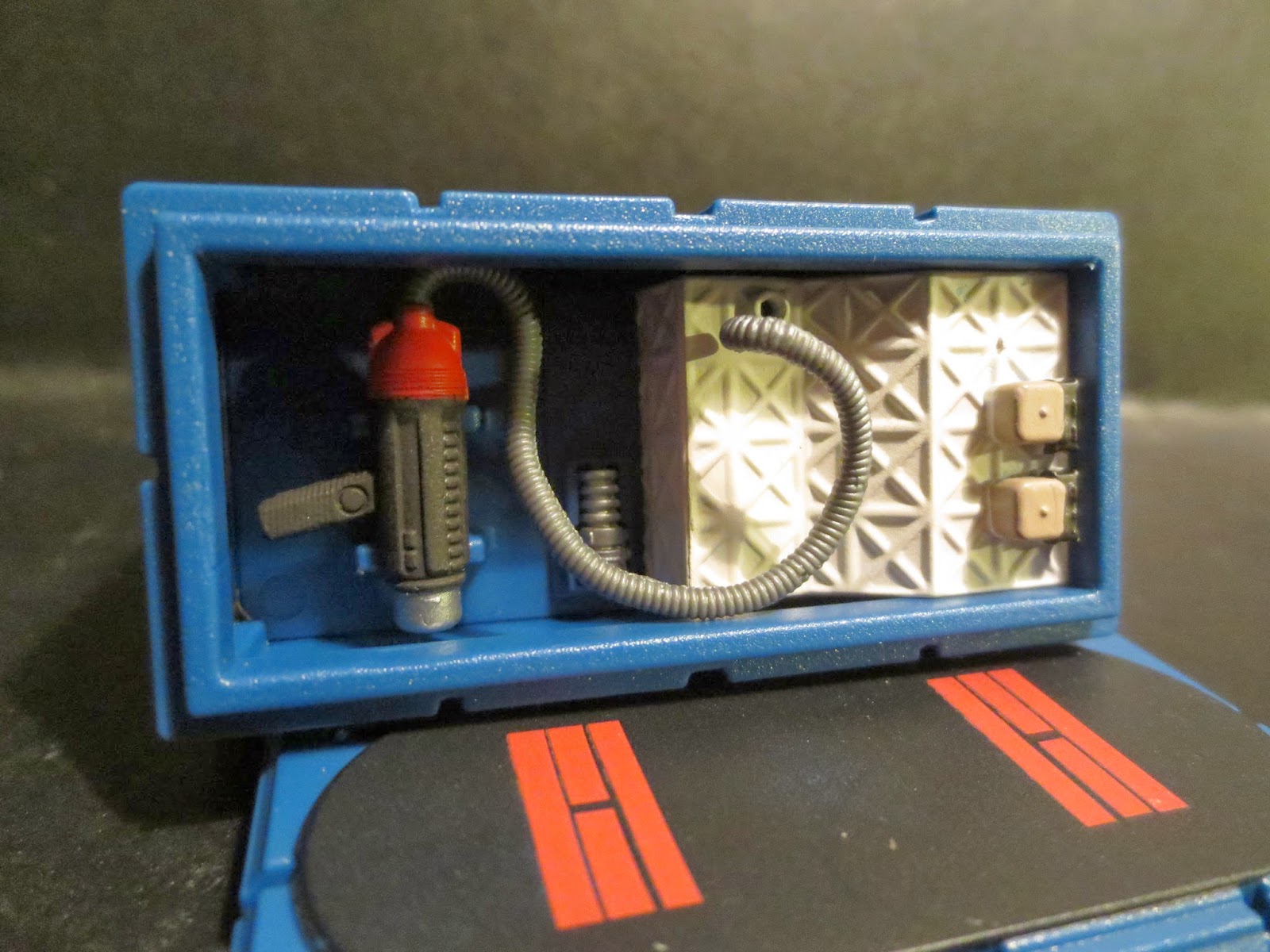 While the figures are cool, the biggest draw of this set has to be the top half of the scanning equipment box that was used by scanning crew BT-445. The top half of the box fits seamlessly on the lower half that comes with the Death Star Scanning Crew set to give you the full scanning experience. The exterior of the box is simple but looks to be incredibly film accurate. It has two built in handles and some clean paint applications on the removable lid. Inside, the detail is incredibly impressive. The computer equipment is well detailed and there are two removable parts: a scanning remote and the scanner itself. The remote is a small silver device that rests in a small tray while the scanner is a larger unit that can attach to the box via a small cord. It features quite a few different paint applications and looks great. Hasbro really delivered with this piece. 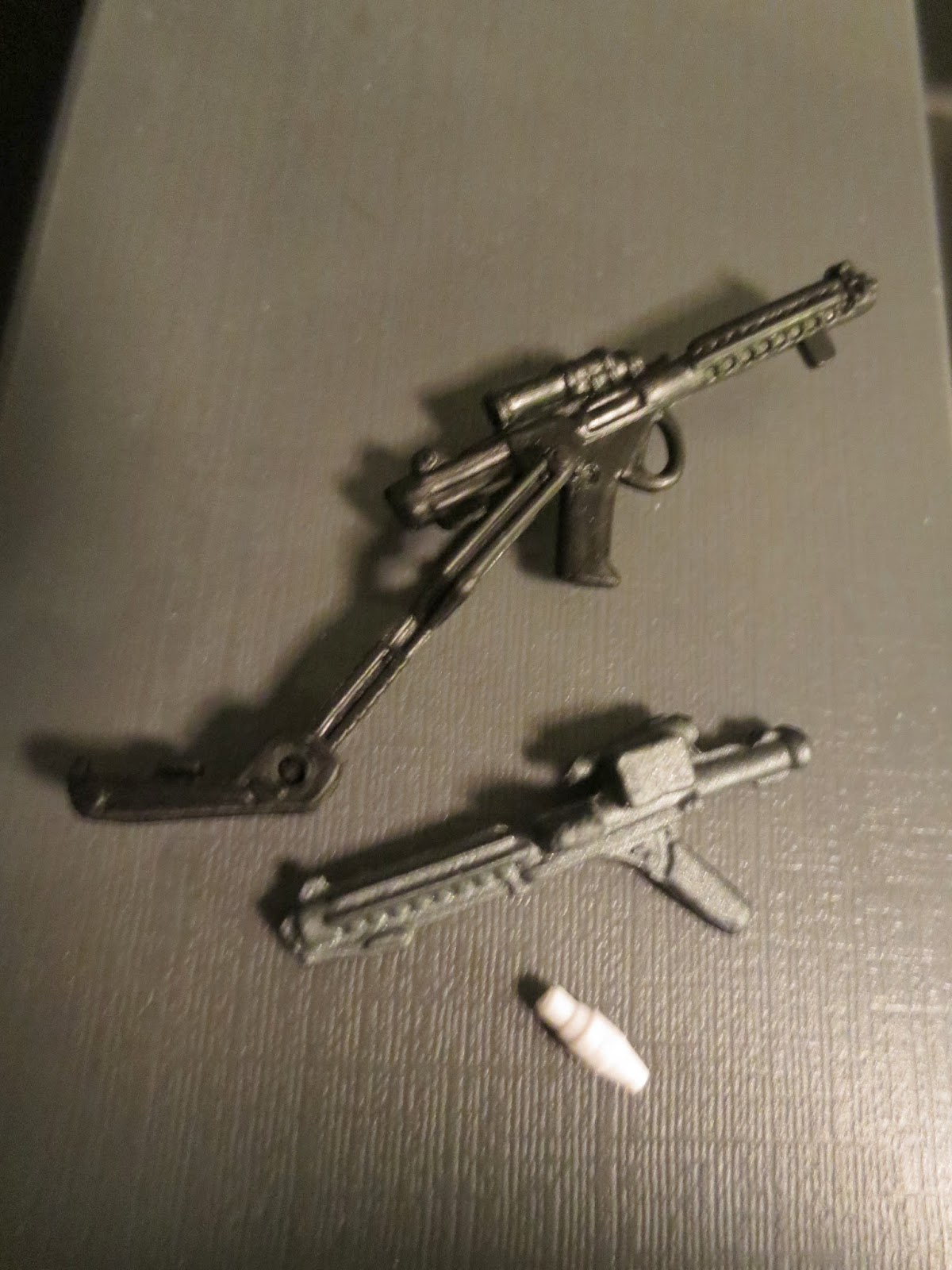 Each trooper in the set comes with his own accessories, too. The Imperial Technician comes with a basic BlasTech E-11 blaster rifle that can slip right into his holster. It's molded in grey plastic and is an older version of the weapon. Stormtrooper TK-421 comes with two accessories: An E-11 with a folding stock and the C-1 personal comlink. The E-11 blaster rifle is very well detailed and molded in black plastic. It has a working two piece folding stock. Unfortunately, unless you remove the stock, it will not fit in TK-421's holster. The Comlink is a tiny little white cylinder that clips onto his utility belt. Be careful you don't lose this piece! 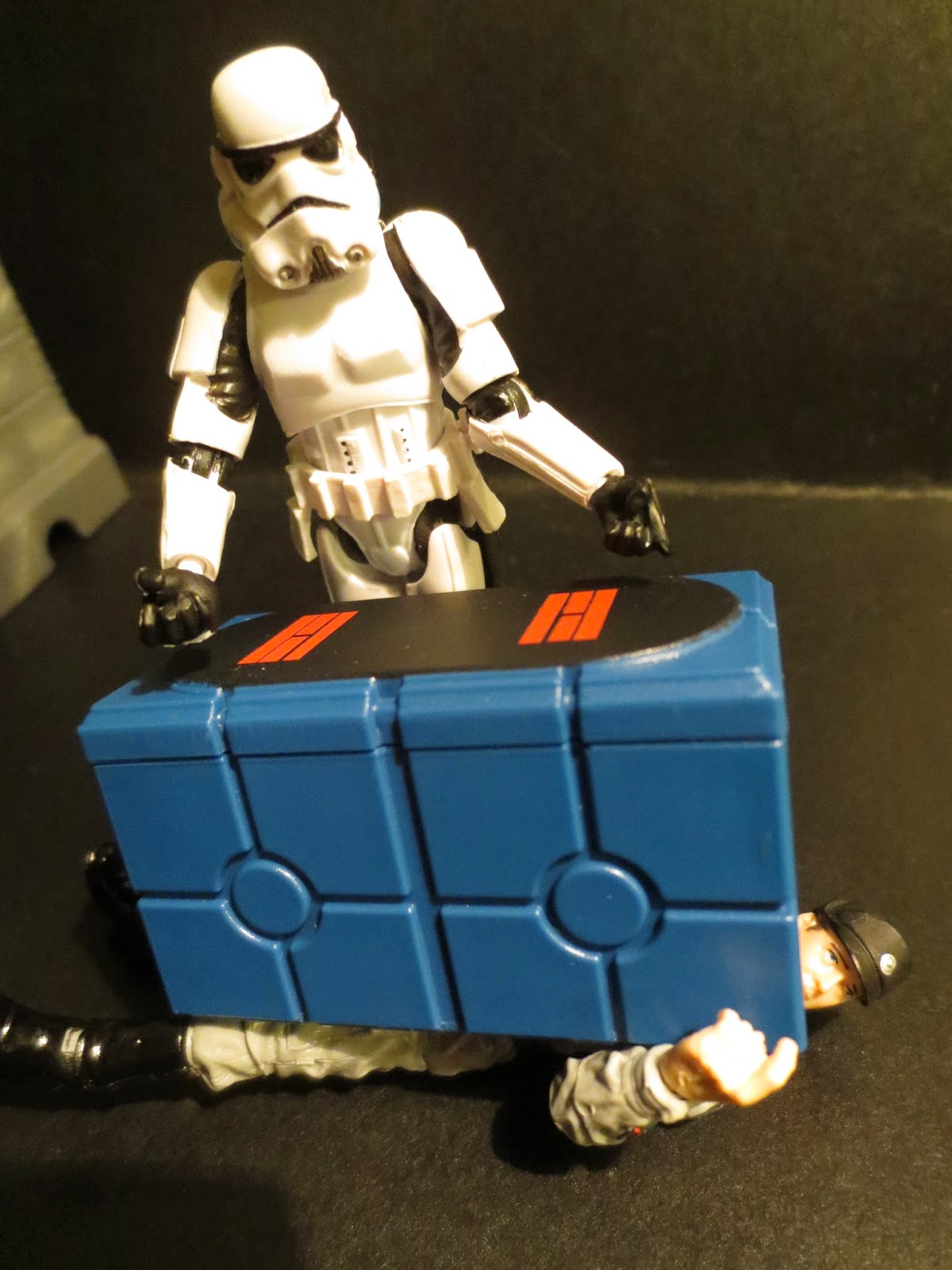 When considering that this set is a retailer exclusive that comes with two figures, the top half of the scanning box, and some really nice accessories all for around $17-18 dollars, I think it's quite a nice purchase. It's been tough for fans of the classic 1/18th Star Wars figures to find too much to be excited lately, so having Hasbro and K-Mart throw us a bone with more vintage style exclusives is always welcome. Imperials are always fun (no matter how many you already have) and even though you really need both sets to really create the full scanning crew, I think most fans and collectors will happily oblige. While I do wish Hasbro had used some newer molds that gave these guys better hip articulation, overall I'm quite happy with the set. I'm giving this set a Great and a 1/2, as it really is a treat for fans of the Original Trilogy. 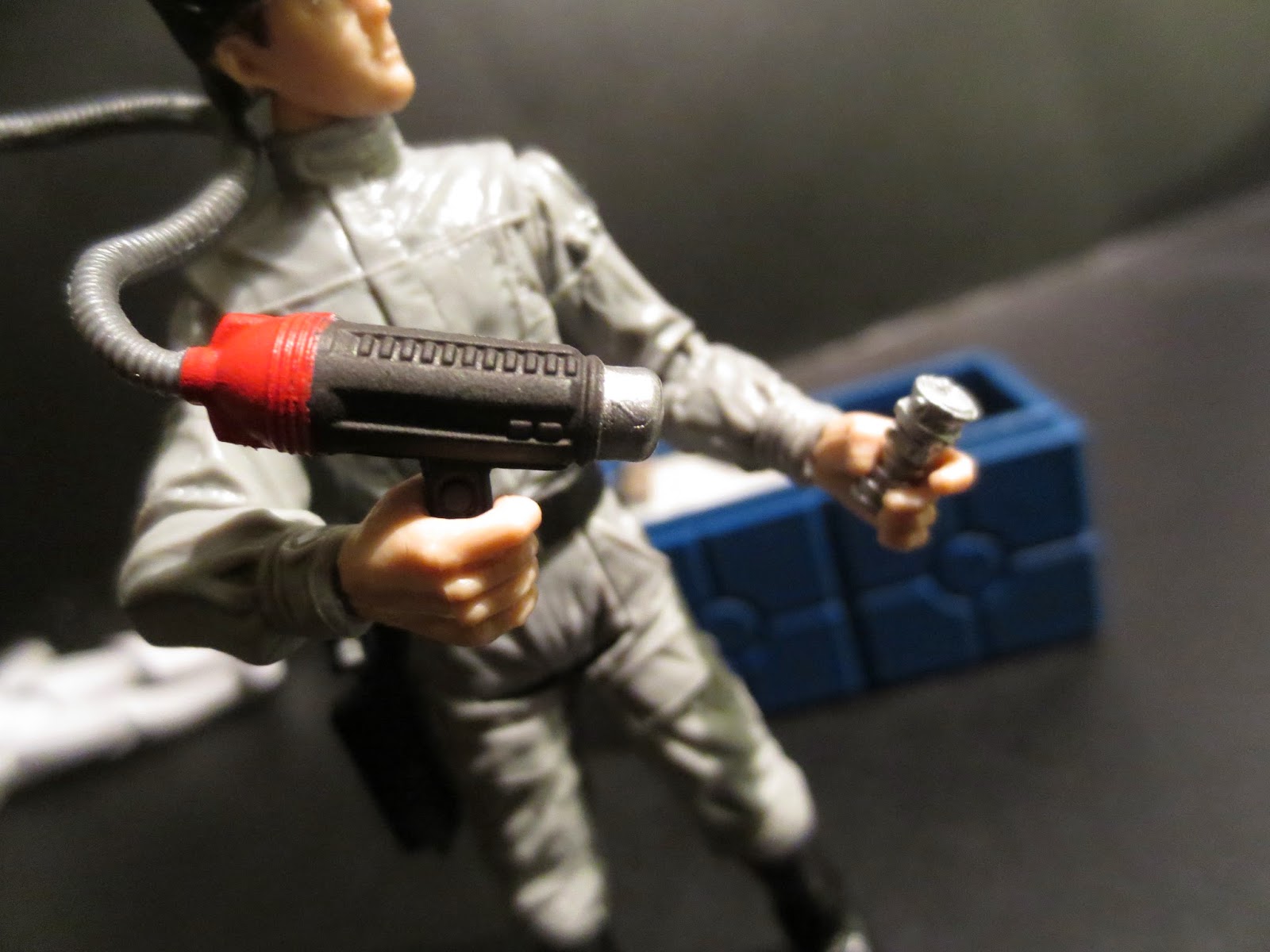