Action Figure Review: Digitino from Masters of the Universe Origins by Mattel 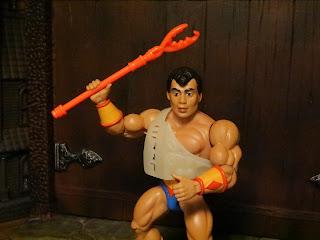 Ready for another Masters of the Universe Origins review? Let's take a look at another member of the Sun-Man and the Rulers of the Sun cast who has been introduced into Eternia: Digitino, the Numerical Genius! I will say that out of all of the Rulers of the Sun characters, Digitino might look the most dull (it's either him or Holographo, but Holographo does have a beard and a giant Nerf looking sword). Other than having some numbers on a glow-in-the-dark vest, there's nothing about Digitino that really seems to convey the idea from his original origin story that he is Dr. Carlos Montanez, a scientist whose brain has been fused together with a computer. Dr. Montanez also receives a vision of Quetzacoatl and is charged with stopping a villain named Subtractus. Of course, in the comic included with this figure, Digitino is now a resident of Trefixa who seems to have a computer-like mind, kind of like how Sherlock Holmes was portrayed in the Robert Downey Jr. films. It's pretty cool in the MOTU Origins minicomic "Mind Over Matter" which is included with Digitino and the other figures in this series. Ready to check out Digitino and see how the figure turned out? Then join me after the break...

Action Figure Review: Bolt-Man from Masters of the Universe Origins by Mattel 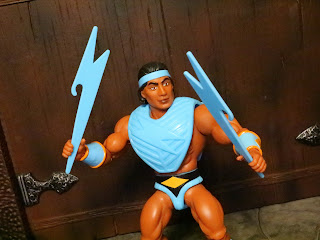 Today I'm kicking off another mini marathon of action figure reviews and this time I'm taking a look at some of the newest Masters of the Universe Origins figures out there. Let's start with one that's really out of left field: Bolt-Man. Wait... you don't remember Bolt-Man? Well, neither do I. Few will since he was part of the Sun-Man and the Rulers of the Sun action figure line in the 1980s. Masters of the Universe fans largely seem to love figures based on concept artwork, bizarre international variants, unproduced prototypes, and "knock off" lines designed to be compatible to MOTU, so it's pretty neat that Mattel has been officially releasing Olmec Toys' Sun-Man figures as part of Origins. So, who is Bolt-Man? He's listed as a "Molecular Regenerator" but his real name is Joe Red Eagle. He's a Native American/ Indigenous person from the Apache tribe and comes from Iowa, according to a booklet included with the vintage figures. Bolt-Man's power comes the turquoise bandanna, given to him by his mother, and allows him to manipulate molecules, regenerating and restoring them. He's fast and he has the power to change into other great Native Americans that are part of his heritage. Now, looking at Mattel's copy for the version of the character, Bolt-Man is a healer and a warrior who can manipulate molecules. Is he a transplant from Earth like Queen Marlena now that he's a part of MOTU? In the minicomic he identifies himself as Bolt-Man of Trefix, so I doubt the Earth origin of the vintage pack-in will still be used. As part of the "Rise of the Snakemen" minicomic Bolt-Man uses his powers to help heal He-Man of King Hiss' poison, so he has a unique powerset to add to the crew. This guy is a modern recreation of a pretty rare vintage figure and he comes with blue lightning bolt weapons; that makes him kind of unique, right?. He definitely looks like someone who would ally himself with He-Man in the Filmation series, so let's take a look at Bolt-Man after the break and see what he brings to the table... 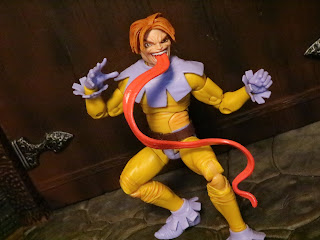 I have a bunch of Marvel Legends to review to wrap up the year but since Toad is one of the extra special Marvel Legends: 20th Anniversary Series figures, I'll start with him. Yes, the rumors are true: Toad was indeed one of the original four Marvel Legends figures released by Toy Biz back in 2002. He wasn't originally intended for Marvel Legends, and thus he looked and was articulated quite differently from the other three figures in the first series (Cap, Hulk, and Iron Man). Instead, he was supposed to be part of a 2 pack with a movie version of Toad from the X-Men film. Toy Biz definitely moved figures around and reused things a lot, so Toad added an already designed villain figure with a recent bit of gained popularity into the line. Now, 20 years later, Hasbro has gone back and finally introduced a well articulated Toad figure into the line. It's kind of weird that Toad came out a few months later rather than shipping with the other figures, but they didn't exactly all ship together, either. Over the past 8 or so years Hasbro has really been filling in the X-Men roster and Toad has definitely been overdue for a modern release. Ready to see if this one is worth picking up? Then join me for a look at Toad (with no "struck by lightning" jokes after the break...

Minifigure Review: Orko from World's Smallest: Masters of the Universe by Super Impulse 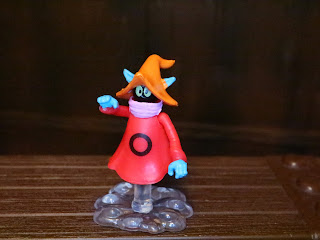 I'm not going to check out all of the figures from series 2 of Super Impulse's World's Smallest Masters of the Universe as there are quite a few repaints (a translucent green Slime Pit He-Man, a Green Goddess Teela, and the dark blue and black Leo Skeletor), but I wanted to hit the new stuff and, after Castle Grayskull, the next most exciting release is Orko. I'm always happy to see Orko show up and he's a cute little addition to this line. He's really small, definitely smaller than the regular figures, but he's nice and colorful and really stands out. Ready to check out a super tiny version of Orko? Then let's check out the World's Smallest Orko after the break... 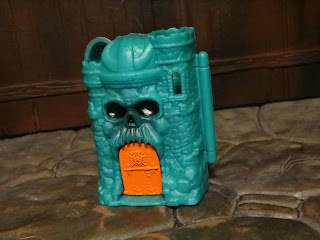 Castle Grayskull is perhaps the most recognizable action figure playset of all time and now it's also one of the smallest. This year Super Impulse toys has released a new series of World's Smallest Masters of the Universe toys and Castle Grayskull is the most interesting of the releases. It's a pretty faithful recreation of the classic 1982 playset that's only a little more than 2 inches tall. The World's Smallest brand has put out some pretty neat stuff but this one definitely is one of the coolest releases they've done. For my next mini marathon of releases I'm going to be checking out series 2 of the World's Smallest Masters of the Universe, beginning with Castle Grayskull. Ready to venture into this ancient fortress of mystery and power? Then join me after the break... 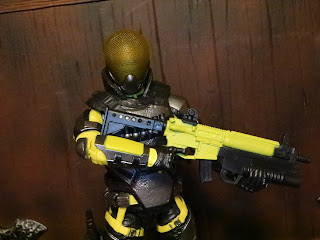 Would you believe it's been over two months since I got this Scarabs figure for my birthday? I received four Action Force figures for my birthday (Duster, Desert Rat, the Garrison Cavalry, and the Scarabs) and it's take me over two months to review them all. What can I say? I've been kind of busy. Today I'm taking a look at the Scarabs. Well, the package says Scarabs, but I'm pretty sure the singular troop is referred to as a Scarab, so I'm calling him a Scarab. Anyways, he's the first member of the SWARM, a mysterious and sinister faction that provides security to the states unaffiliated with New Colonia in the Action Force story. While the SWARM troopers strike from the air, the Scarabs are the ground forces for the SWARM. This guy's a pretty interesting figure and I'm excited to have him. He's definitely more futuristic and a bit more fantastical than the other Action Force figures I've reviewed, so how does he compare? Let's find out after the break... 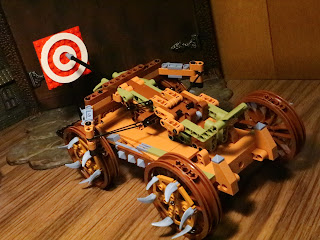 Happy Thanksgiving everyone! Today I've got a review of a very cool building brick set that's a veritable buffet of medieval weaponry. The good folks at JMBricklayer sent me this set to review and I have to say that it's a pretty fantastic one. The set is called "Remarkable Ancient Machine/ 3 in 1 Medieval Weapon #30001 and it's a really cool set that features the parts to build any one of three medieval siege weapons: Either a catapult, a bombard, or a ballista. This is a very high quality set that uses a lot of pin and rail pieces to create some interesting brick built devices. They also work, too. The catapult launches and the bombard and ballista fire projectiles, all with the use of clever engineering and various rubber bands. This is a very different set from what I typically build and I had a lot of fun with it. I never got much into the Lego Technic stuff as a kid, so this was a fun introduction to that unique style of building that's a bit more akin to something like an Erector set than a traditional brick built set. The set also scales really with action figures, so I've included a few shots of the set with some G.I. Joe Classified Series figures or Masters of the Universe Origins to give you an idea of the scale.

If you dig the set, it's actually on sale today through Monday 11/24 for 30% off on Amazon (use discount code VIPJMB30) or on JMBricklayer's own website. You can also order any other sets that aren't already on sale through their at 15 % off store using my special discount code VIPJerry15%. That's good through the end of 2022, so use it for all of your holiday shopping needs. Just tell them your old pal Barbecue17 sent you!

Now, let's check out this Remarkable Ancient Machine after the break...